Politics Aboard Trump’s Gilded Jet, Every Seat Is First-Class
Politics 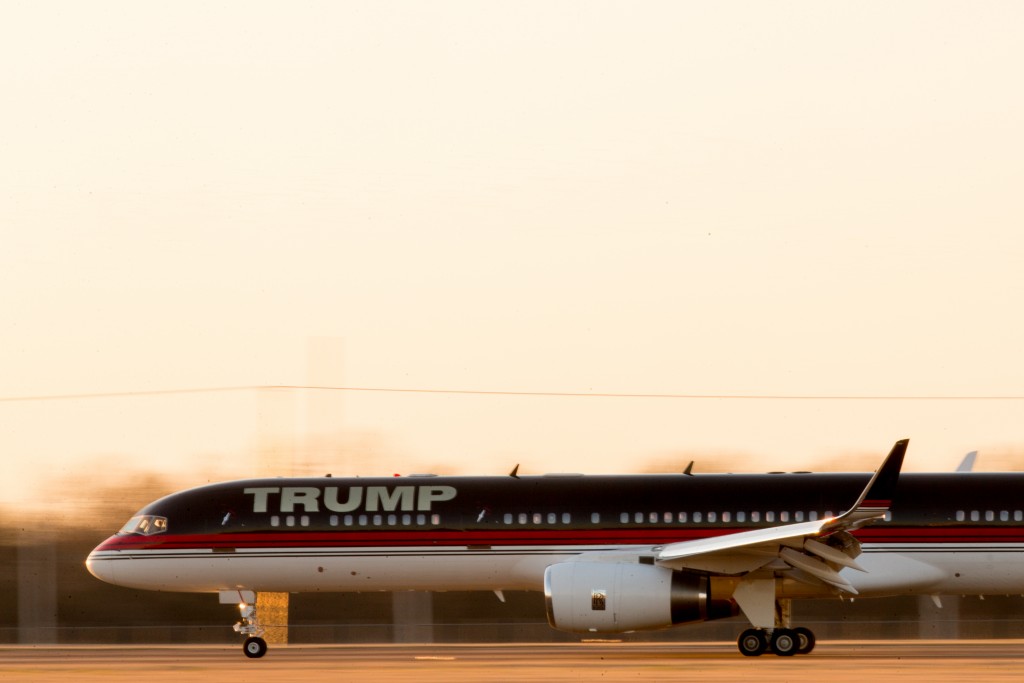 A few thousand people waited for Donald Trump to arrive for a campaign rally in an airplane hangar in northwest Arkansas on Saturday afternoon.

In the cloudless blue sky, the billionaire businessman’s jet appeared. It swooped past the hangar and disappeared as hundreds of phones recorded the spectacle.

“Oh my G-d, there it is – wow!” a middle-aged woman said, as she recorded a video she would later post on social media. A 66-year-old retiree wearing a camouflage-style campaign hat burst into tears at the sight and declared the plane “more impressive than Air Force One.” Two women wondered what Trump was saying onboard and if he even knew which state he was in on his whirlwind tour. “Here we go,” a dad said to his young son, who was sitting atop his shoulders. A young couple debated whether the lettering spelling “TRUMP” was gold leaf or just paint.

Given that personal wealth has dogged so many presidential candidates eager to connect with voters, a personal Boeing 757 jet is the sort of thing many politicians would hide as soon as they launched a White House bid – or would never own in the first place.

What does Trump do? He flaunts his immense wealth and rolls up in “Trump Force One” at campaign rallies at small airports in eastern Iowa, the Phoenix suburbs and remote Arkansas. In a campaign so dominated by the businessman’s personality and featuring few supporting characters, Trump’s jet has quietly taken an outsize role.

The plane is Trump’s gold-plated flying office and home, allowing him to commute from New York to early-voting states while his rivals have to travel in recreational vehicles, on commercial flights or, if they can afford it, chartered planes. It’s his traveling reception hall, a luxurious place where he invites reporters for impromptu news conferences, potential endorsers he’s trying to woo and, on a whim, Iowa children who wanted to explore.

The plane is opulent and over-the-top – and very, well, very Trump. It symbolizes his campaign promise to make the country rich again.

Early in life, the plane was far less richly appointed, joining the fleet of a low-cost Danish airline company in 1991. Three years later, it briefly moved to a company based in Mexico City, but soon after, it was purchased by Microsoft co-founder Paul Allen. The two spent more than 15 years together – until 2011, when Trump took possession and spent heavily on lavish renovations .

The plane can accommodate 43 passengers, fly for 16 hours and can go more than 500 miles per hour, thanks to Rolls-Royce engines. Onboard: a wood-paneled galley, “first-class sleeper area” with oversize light-colored leather seats, dining area, VIP area, guest bedroom with a full-size bed and “Mr. Trump’s bedroom,” which is decorated with “yards and yards of gold silk.”

“You’ll notice the seat belts, as well as everything else, are 24-carat gold-plated,” Miller says, as the camera zooms in for a look. The Trump family crest is also featured throughout the plane.

As Trump Force One landed Saturday in Arkansas and rolled up to the hangar, Brenda Cowden shook her head and said: “Look at that. Look at it.”

Cowden first saw the plane in the sky a couple of months ago in Dallas. She was visiting, and he was in town for a rally.

“I was on the freeway, so I pulled over and shot a photo of the plane as it went over,” said Cowden, a retiree who lives in Greenwood, Arkansas, and plans to vote for Trump on Super Tuesday because she said he will improve the quality of life for veterans like her husband. “I trust him.”

The door of the plane opened. Trump appeared, along with New Jersey Gov. Chris Christie (R), who endorsed Trump on Friday and, therefore, was allowed to travel with the Republican front-runner for a day – the same honor bestowed upon former Alaska governor Sarah Palin (R) and Liberty University President Jerry Falwell Jr. last month ahead of the Iowa caucuses.

The two men waved, descended a staircase and spoke to the crowd for more than an hour. Few could see either man on the stage, but most could see the plane – black and white with a bold red stripe and a windswept “T” on the tail.

“It’s the only thing I could see,” said Jordan Baker, 27, of Rogers, Arkansas, who posed for a photo with the jet after the rally rather than trying to elbow her way through the crowd for the chance to shake Trump’s hand.

Trump will often speak at length about his beloved jet, especially when it’s standing behind him, like a silently supportive life partner. He says it’s one of his only campaign expenses – unlike his rivals who have spent tens of millions of dollars on media ads, internal polling, fundraising and consultants. Trump’s campaign reimburses his airline company, TAG Air, for use of the plane. Reports filed with the Federal Election Commission in 2015 show that the campaign paid TAG Air $2 million last year and another $537,436 in January.

The plane lingered on the runway for more than four hours. Long after the rally ended, Trump reboarded and invited a few local reporters onboard – warning them to not scratch his expensive woodwork. Late in the afternoon, the plane rolled away, headed to a rally at a hangar in Tennessee.