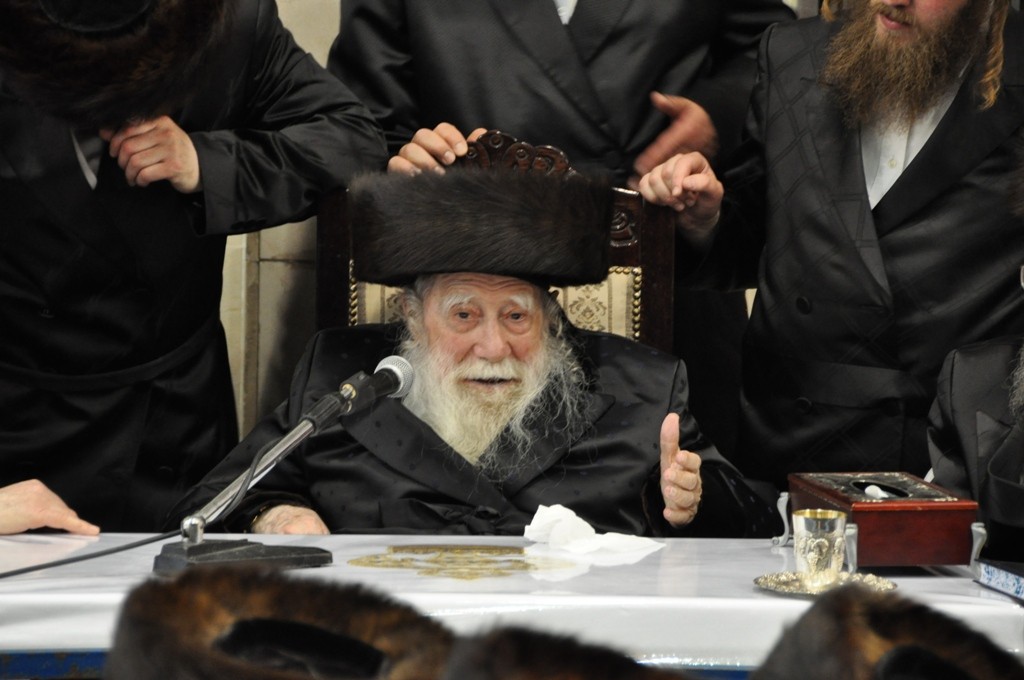 The Torah world was plunged into mourning early Monday morning (Israel time), with the petirah of the Erlau Rebbe, Harav Yochanan Sofer, zt”l, in Yerushalayim.

Many tefillos were held since the Rebbe was hospitalized several weeks ago in the Hadasah Ein Kerem Hospital on behalf of the Rebbe. The name Harav Yochanan ben Tushena was on the lips of many, but, alas, the gezeirah was sealed, and on Monday morning, surrounded by many members of the family, the Rebbe was niftar.

Harav Yochanan’s mother, Rebbetzin Tushena, was the daughter of Harav Moshe Yochanan Schoenfeld, Rav of Ermihalyfalva in Hungary. Thus, Yochanan was named for his maternal grandfather. He was the second child in the family.

In his early formative years, he learned under the tutelage of his illustrious father and grandfather. As a bachur, he learned in the yeshivah of Harav Yosef Asher Pollack, mechaber of She’aris Yosef Asher, in the neighboring town of Verpelet. He also learned for three years in the yeshivah of Harav Chaim Aharon Dovid Deutsch, mechaber of Tvuas Goren, in Balassagyarmat.

During the early years of the Holocaust, Hungary was relatively calm; it was not overtaken by the Nazi regime until 5704/1944.

The month of Sivan of that year was the most horrific month for Hungarian Jewry. During that month, the Erlau kehillah were deported to Auschwitz by the Nazis. On 21 Sivan 5704/1944, Harav Moshe Sofer, together with his Rebbetzin, daughters and his illustrious father Harav Shimon, were murdered by the Nazis. Hashem yinkom damam. The two eldest sons, Harav Avraham Shmuel Binyamin and Harav Yochanan, were the sole survivors of the family.

Reb Avraham Shmuel Binyamin was niftar in 5708/1948 due to an illness, and was buried in the cemetery in Erlau, near the kever of his grandmother Rebbetzin Malkah Esther Sofer, a”h.

Harav Yochanan married Rebbetzin Miram Pall, a”h, the daughter of Harav Yaakov Pall, a descendant of the Chasam Sofer’s sister, in Erlau. They had three children in Hungary: Harav Moshe, Harav Yaakov and Harav Avraham Shmuel Binyamin, and moved to Eretz Yisrael in Elul 5710/1950, where their other four sons were later born.

In Eretz Yisrael, Harav Yochanan settled in Yerushalayim with a group of talmidim who had learned with him in Hungary.

In Yerushalayim, he became very close to the Belzer Rebbe, zy”a; and even named his youngest son after the Rebbe. The Erlau community also adopted numerous minhagim of Belz.

In 5713/1953, Harav Yochanan founded the Erlau Yeshivah in Katamon, in south-central Yerushalayim, Yeshiva Ohel Shimon, named for his grandfather. Harav Yochanan also founded Machon Chasam Sofer. This institute has published many sefarim of the Chasam Sofer and his descendants over the years.

In the yeshivah, the Rebbe served as a Rosh Yeshivah, delivering daily shiurim. He served in this capacity for more than fifty years, teaching and inspiring thousands of talmidim.

The Erlau Rebbe was also very active in Klal Yisrael. He was appointed as a member of the Moetzes Gedolei HaTorah of Agudas Yisrael more than fifty years ago, and was always involved in the important issues facing chareidi Jewry in Eretz Yisrael.

The Sanz-Klausenberg Rebbe, zt”l, appointed the Rebbe to serve as a member of the presidium of the Mifal HaShas.

The Rebbe penned a kinnah for the memory of the Kedoshim of the Holocaust, which many kehillos recite after the regular kinnos on Tishah B’Av. Many recall the annual Tikkun Chatzos that the Rebbe would lead at the Kosel during the Nine Days, with all the chassidim seated on the ground.

Over the years, the Rebbe founded Erlau kehillos across Eretz Yisrael as well as overseas. His sons serve as Rabbanim of the various kehillos.

The Rebbe merited to make shidduchim for his children and grandchildren with many leading Rebbes and Rabbanim.

Rebbetzin Miriam was niftar in Shevat 5759/1999 and was buried in Yerushalayim.

In recent years, the Rebbe had become weaker and was hospitalized several times.