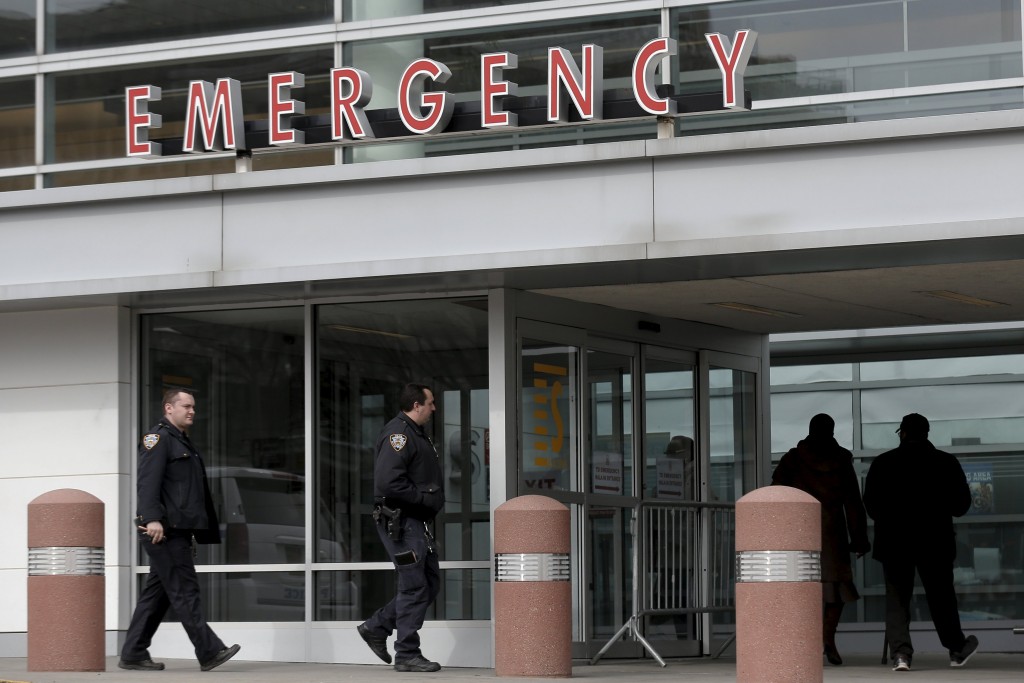 Two police officers were shot in a confrontation with a gunman who slammed his car into a police vehicle early Saturday, in the second on-duty shooting of multiple officers in the nation’s biggest city this month, police said.

Officers William Reddin and Andrew Yurkiw were in stable condition after the 3:30 a.m. encounter, which happened as multiple officers converged and fired at an armed driver who had pointed a gun at some of the officers, fled and then rammed a police car, Police Commissioner William Bratton said.

The suspect, identified as Jamal Funes, 34, was in critical condition with multiple gunshot wounds, Bratton said. It wasn’t immediately clear whether Funes had a lawyer who could comment on his behalf, and no telephone number for Funes’s family could immediately be found.

“These are very dedicated officers who were out there protecting us,” Mayor Bill de Blasio, a Democrat, said at a news conference.

Investigators were piecing together how many officers fired and the exact sequence of events in what Bratton described as “a complex crime” involving eight officers and Funes, who had a .357 Magnum revolver. Officers found the gun on the front seat of Funes’s car, Bratton said, adding that police were trying to determine what might have prompted his conduct.

Mayor Bill de Blasio said the officers were alert and expected to recover.

“Thank G-d both these officers will be making a full recovery,” said Mayor Bill de Blasio, who visited the officers in the hospital and then joined Bratton at a news conference. “And thank G-d for what they do for us.”

The shooting came a little more than two weeks after Officers Diara Cruz and Patrick Espeut were shot and wounded on patrol in a public housing stairwell by a gunman who ended his own life soon after, police said. Last month, Officer Sherrod Stuart was wounded in the ankle in what police later determined was a friendly-fire shooting as another officer exchanged gunfire with a suspect in a Bronx street brawl. In October, Officer Randolph Holder was shot and killed by a suspected bicycle thief he was chasing.

Yurkiw, an officer for three years, was hit in his bulletproof vest — 27 years after such a vest also saved his father, former Officer Paul Yurkiw.

“It’s like I’m going through this all over again,” Paul Yurkiw told the Daily News Saturday. “Without the vest, me or him and a lot of other police officers wouldn’t be walking on this planet right now.”

Reddin was shot in the hip, authorities said.

Reddin, a nine-year police veteran, was part of a harrowing arrest in the same part of Brooklyn in 2011, when his partner, Sgt. Michael Miller, struggled with a suspect over a gun. Miller’s finger, wedged between the gun’s hammer and cylinder, prevented the suspect from pulling the trigger, according to news reports at the time.

Bratton said the confrontation started when two uniformed housing police officers — not Yurkiw and Reddin — heard gunfire near an intersection in the Bedford-Stuyvesant neighborhood. As they approached Funes, he pointed a revolver and fled, and they followed and radioed for help.

Driving the wrong way down a street, Funes rammed a responding, marked police car, Bratton said. He said Reddin and Yurkiw, in plainclothes, were in another car on the scene as multiple officers opened fire.

Funes was still in his car when he was shot, Bratton said.