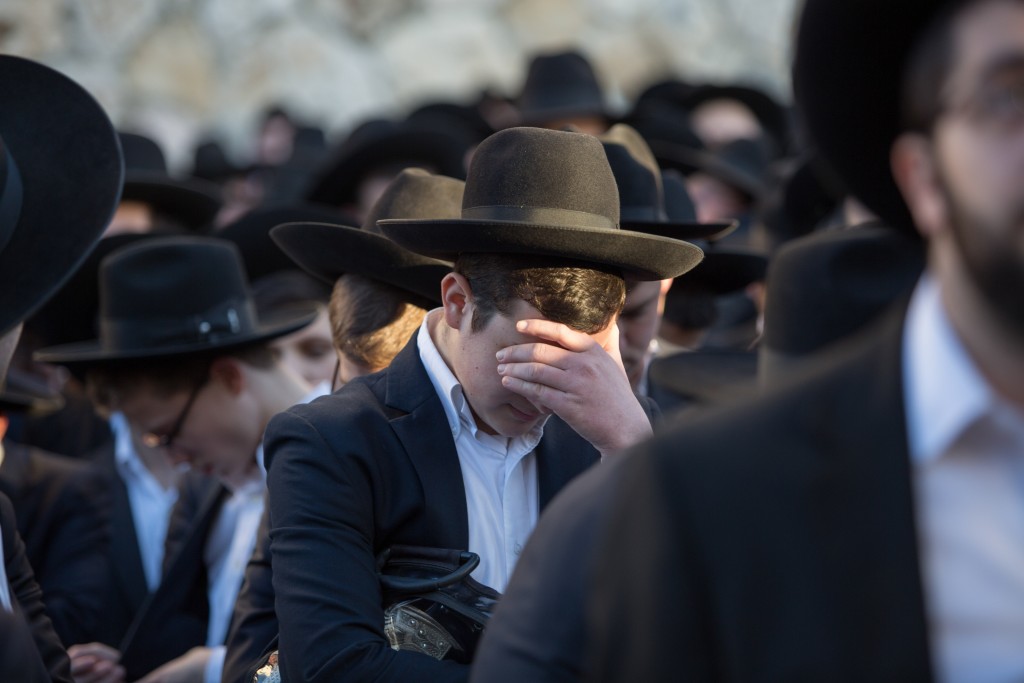 Ten people were injured, including a 20-year-old kallah who is fighting for her life at Assaf Harofeh Hospital. The family asked that people daven for Sarah bas Dinah.

Only recently, Yaakov Meir printed a pamphlet collected from the thoughts of Rav Schick.

Known for his hasmadah, Yaakov Meir was learning from his sefer throughout the doomed bus journey, until his tragic end.

“He was an outstanding ben Torah, with special middos,” says a family member. “He had unbelievable ahavas Yisrael, smiling at everybody.

“This year he finished Shas, and he completed Shishah Sidrei Mishnah over 100 times. Every day he recited the whole of Tehillim, and would go nearly every day to Kever Dovid Hamelech.”

The niftar would often talk about the yom hamisah, saying that we must snatch as many mitzvos as possible beforehand.

Yaakov Meir’s best friend was his cousin Rav Shmuel Yitzchak Deutsch, who was killed a year ago in a car accident near Emanuel.

Rosh Yeshivas Darkei Torah, Rav Moshe Yaakov Weiss, spoke about Yaakov Meir’s sterling character. “His whole life was a life of thirsting for knowledge, of making every moment count. And indeed, he toiled and succeeded. He completed Shas last year, and Shishah Sidrei Mishnah over 100 times.

Rav Moshe Kalish, menahel ruchani of Yeshivas Maamar Mordechai, Nadvorna, where he learned in the yeshivah ketanah and then the yeshivah gedolah until a year ago, said that “Yaakov Meir was not zocheh to build a bayis ne’eman b’Yisrael. B’shamayim, it was decreed that he build a beis mikdash me’at in the olam ha’elyon.”

He lauded the hasmadah of the bachur, which was a model of inspiration for others, as he learned 18 pages of Gemara and 18 chapters of Mishnayos every day.

“In this beis midrash elyon, you will enter, and stand on the Yom Hadin with the Gemaras you learned with such clarity, with the yiras Shamayim you acquired.”

Yisrael Weinberg, z”l, 26, from Yerushalayim’s Shmuel Hanavi neighborhood, was killed on his way to a cousin’s chasunah in Bnei Brak. He learned in Yeshivas Slonim, Yerushalayim. His father, ybl”c, Rav Naftali Tzvi Weinberg, is a direct descendant of the Yesod Ha’avodah, the first Slonimer Rebbe, zy”a.

He grew up in a home pervaded with the influence of his illustrious ancestors, and Yisrael followed in their holy footsteps.

Only two weeks ago, that home heard the sounds of a joyful celebration as Yisrael made a siyum in Maseches Shabbos.

The maspidim — Harav Yitzchak Moshe Erlanger and the bachur’s uncles Harav Matisyahu Weinberg, Harav Noach Weinberg and Harav Efraim Weinberg — all praised his “golden middos, big heart and the chessed he would do with a smile.”

“Srulik never hurt anybody. He was a pure neshamah.” He was taken from us, they said, as a korban for the klal, and like any korban, we need to do teshuvah so that it should be pleasing to Hashem.

His father, Rav Naftali, ybl”c, said Kaddish and asked forgiveness on behalf of the family.

The levayah left Shamgar to the Slonim beis medrash, where a large crowd headed by the Slonimer Rebbe, who recited Kaddish there, accompanied Srulik on his last journey.

Aharon Mordechai Cohen, z”l, 18 — The Pearl of the Yeshivah

Aharon Mordechai Cohen, z”l, 18, from Bar-Ilan Street, Yerushalayim, was the son of Moshe Dovid and Chava Rachel Cohen, a prominent family in the Rachmastrivka Chassidus.

Aharon Mordechai — or Motti, as he was fondly known — learned in the Bobov Yeshivas Eitz Chaim, Ezra Street, Bnei Brak.

The Mashgiach Harav Meir Luria described Aharon Mordechai as “the pearl of the yeshivah,” while the Rosh Yeshivah Harav Michael Heller said he was “the example for every bachur of how to act.”

“He was a very special bachur — all that interested him was Torah and yiras Shamayim, a real masmid,” says a friend. “Every free moment he learned. As a bachur in shiur gimmel, everybody wanted to be close to Motti and learn with him.”

At six in the evening, he boarded the bus at the station near his home to return to yeshivah in Bnei Brak. Nothing out of the ordinary. At the time of the fatal collision, all connection with him was broken off. His worried parents tried to locate him, but with no success. An hour passed, and another, and the tension increased.

After news of the accident was out, family members tried to ascertain if he had been among the hospitalized. There was a report of a victim who had died at Tel Hashomer, who had not yet been identified. It was not until 10 p.m. that his identity card was found near the wreckage, among many other items that had been flung into the road by the impact of the terrible crash. Still, it was not until 2 a.m. that his father arrived to identify him and confirm the worst.

The levayah left from Bobov Yeshivas Eitz Chaim, where he had been growing in Torah and avodah. The Roshei Yeshivah praised him as a ben aliyah, someone whose great desire was to learn another masechta, and another. They stressed that he distinguished himself in mitzvos ben adam l’chavero, as well. “Everyone was always glad to see him. He had a smile for everybody.”

The levayah proceeded from there to Yerushalayim, where thousands of mourners were waiting at the beis hamidrash Rachmastrivka.

Rav Yitzchak Moshe Erlanger opened the hespidim by tearfully recalling that when Aharon Mordechai came to the yeshivah, he asked to join because “that was where they were working at acquiring yiras Shamayim.”

He recalled that once, when a tragedy occurred, he came into the beis midrash and wanted to know, “What shall we do l’hitchazek?”

“The Rachmastrivka Rebbe replied: ‘These days, we have to strengthen ourselves in everything, in Torah, in tefillah; we have to especially avoid the new technology.’

“If so, after this terrible tragedy, in which bachurei Yisrael have been taken from us, we have to strengthen ourselves in everything.”

Levi Yitzchak Amdadi, z”l, 17, from Yavniel, learned in Yeshivas Birkas HaTorah, Rashbam Street, Bnei Brak, and was considered one of its best bachurim.

Two years ago, Levi Yitzchak participated in the Oros Halachah project on hilchos brachos for bachurim of yeshivos ketanos, and won a top prize — 10 volumes of Chazon Ovadiah.

“The same morning you davened at the Kosel to be matzliach in yeshivah,” said his father, Harav Hillel Amdadi, one of the leading Rabbanim in Breslov and a Dayan on the Tzedek Umishpat beis din in Yavniel, “but your tefillos will now help you in the yeshivah shel maalah. …”

“Dodi yarad l’gano — Hashem goes down to His garden to pick the best neshamos. We don’t have an inkling of what a wonderful flower Hashem has just picked,” wept Rav Raphael Maimoni, menahel of the Yaldei Chen Talmud Torah in Yavniel and an uncle of the niftar. “All the bachurim attest to his pleasant ways, his exceptional respect for Rabbanim, and such ahavas haTorah.”

“Levi Yitzchak, we will miss you so much — the family, the bachurim and all the Breslov Chassidim.

“We have lost such a special bachur, and those close to him — his friends and family — know what a loss this is for all.”

Besides his Torah and derech eretz, Levi Yitzchak’s friends remember the constant smile that never left his face.

“Whenever the beis medrash was untidy, Levi Yitzchak would quietly and unassumingly put all the sefarim back in their correct place,” relates a close friend. “He loved learning Torah, and also delved into sifrei Chassidus.”

Over the course of decades, she taught halachah to thousands of talmidos in the branch of Seminar Darkei Rachel, headed by Harav Yechiel Mendelsohn, Yerushalayim. Her courses in the halachos of kashrus and the Jewish home in general prepared them for lives of Torah and kedushah.

Rebbetzin Malmud’s teachings were known to make a lasting impression on her students. Even 30 or 40 years later, they could recall clearly many of the details of the halachos they learned from her.

Her talmidos reacted with shock on hearing of the tragic petirah of their beloved teacher, who the day before had given out certificates with such love and caring.

“You could see girls sitting for hours in silence this morning,” said one of the seminary students, “unable to grasp what had happened. In Rebbetzin Malmud’s class, we heard screams of pain and mourning.”

At the levayah, her husband, Harav Naftali Malmud, said, “It is not accepted to say of a woman, ‘nafla ateres rosheinu,’ but of a woman as great as she, it can be said, ‘ki aveidah gedolah hi lanu,’ we have suffered a great loss.”

The Rebbetzin leaves behind seven children, the youngest of whom is to be married in a month.

Rebbetzin Chanah Pesha Frankel, a”h, 23, from Yerushalayim, was the daughter of, ybl”c, Harav Avraham Yechiel Rabinowitz, the Biale-Ostrove Rebbe. She learned in the Seminar Hayashan and was married for two years to, ybl”c, Rav Mordechai Frankel, who was injured in the crash. Rav Mordechai, who learns in Yeshivas Mir, is the son of the Botoshaner Rebbe.

Rebbetzin Frankel grew up in Givat Shaul, and after the petirah of her mother, Rebbetzin Leah, a”h, a daughter of the Lelover Rebbe Harav Avraham Biderman, zy”a, she looked after her younger brothers.

After marrying, the couple settled in Givat Shaul near her father’s beis medrash.

“Every page of Gemara I learned belongs to her,” said Rav Mordechai, choking on his tears. “In her merit, and with her encouragement.”

He arrived at the levayah in a wheelchair, from the Kaplan Hospital, and was taken back to the orthopedics department, where he is recovering from bones broken in the accident.

“As befitting the daughter of a Rabbinic family, she had noble middos and was always so helpful,” says a family member.

“Supportive to her husband, she was clever, always smiling and very energetic.”

She was buried on Har Hazeisim, next to her mother.

The public is asked to daven for the kallah Sarah bas Dinah, who is hospitalized. Her chasunah is planned for next month.