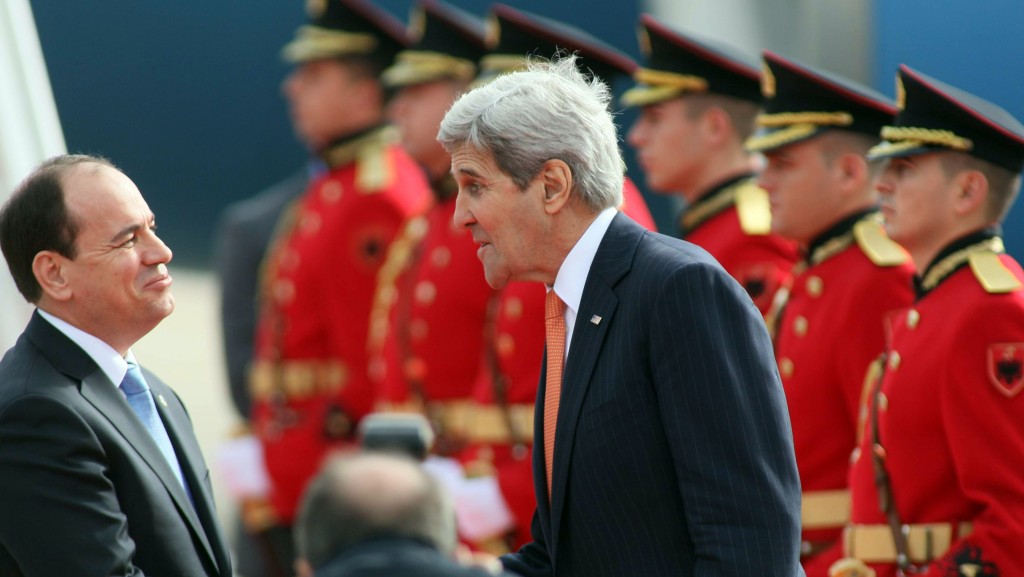 Secretary of State John Kerry on Sunday pushed Albania to enact a major package of judicial and legislative reforms, backed by U.S. money that also is intended to help the Balkan nation take in Iranian refugees from Iraq.

Kerry, returning to the United States from a four-day trip to Germany, made a brief stop in Albania’s capital to urge the government and opposition parties to support the package now pending in parliament. Kerry said the reforms represent a significant step forward in Albania’s bid to join the European Union.

The changes include the creation of an anti-corruption court and prosecutor’s office as well as a national investigative body similar to the FBI in the United States. The U.S. has provided $20 million in assistance to support the reforms and $5 million more is budgeted this year.

U.S. officials traveling with Kerry said that while the reforms are needed for their own sake as well as EU membership, they also were key to Albania’s fulfilling a commitment to relocate thousands of members of the exiled Iranian Mujahedeen-e-Khalq opposition group.

Saddam Hussein had welcomed the Iranian group into Iraq in the 1980s, but Iraq’s current Shiite-led government considers their presence illegal. The group lost what had been its home for decades, Camp Ashraf north of Baghdad, and was moved to a former U.S. base in the Iraqi capital.

Over the past 18 months, Albania has taken in about 1,000 members of the group and has committed to taking 2,000 more.

Neither Kerry nor any of the Albanian officials mentioned the relocations.

After meeting Kerry, Albanian President Bujar Nishani said he had assured Kerry of “Albania’s determination against organized crime and corruption.”

Prime Minister Edi Rama said he expected the reforms to be adopted next month.

“I am very confident we shall do that and with the United States of America on our side there is optimism for success,” Rama said.

The package is the latest effort to clean up what was once one of Europe’s most dysfunctional governments. In December, Albania’s parliament approved legislation barring people with criminal records from holding public office or most civil service jobs. The new legislation gave three months to people currently in office or in most civil service jobs who have a criminal record to resign. After that they will be dismissed.

Kerry praised Albania for its efforts so far, but reminded Rama and his government that more must be done.

“In the end, only Albanians can enact the right laws and insist on their effective implementation,” he said. “Fighting corruption is hard but necessary work – and it is vital to Albania’s economic future and its ability to become one with Europe.”

While in Tirana, Kerry also thanked Albania for its contributions to the fight against the Islamic State group, saying the majority Muslim country was a leader in countering violent extremism.