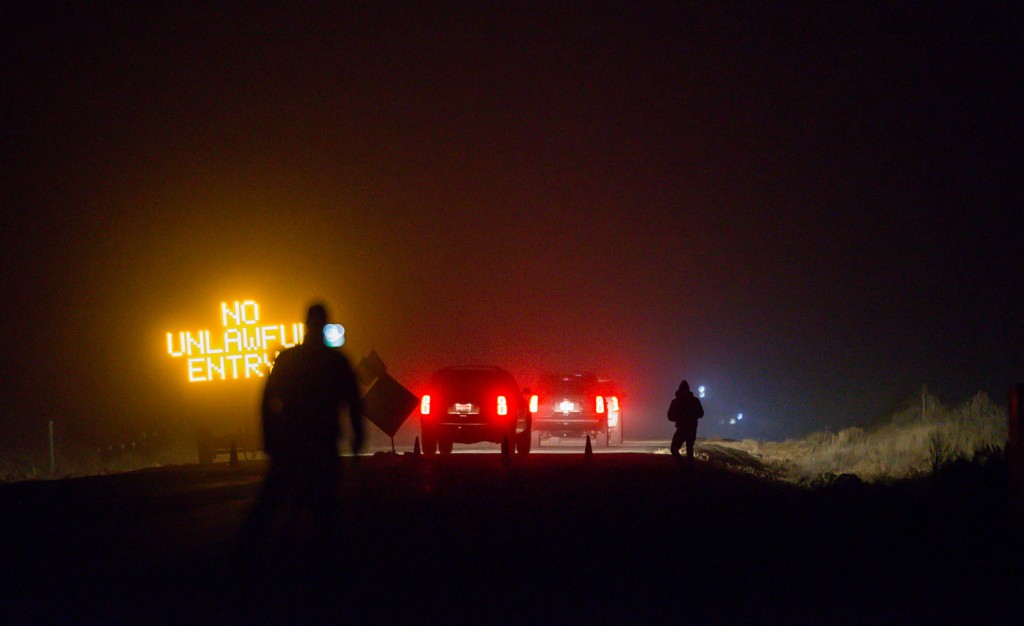 The FBI surrounded the last four occupiers of a wildlife refuge in eastern Oregon as they yelled at law enforcement officers in armored vehicles to back off, prayed with supporters over an open phone line, and said later they would turn themselves in Thursday morning

The tense standoff between law enforcement officers and the four occupiers played out on the Internet beginning Wednesday night via a phone line being livestreamed by an acquaintance of occupier David Fry.

Fry, 27, of Blanchester, Ohio, sounded increasingly unraveled as he continually yelled, at times hysterically, at someone he said was an FBI negotiator. “We’re innocent people camping at a public facility, and you’re going to murder us,” he said.

“The only way we’re leaving here is dead or without charges,” Fry said, who told the FBI to get out of Oregon.

Fry and the three others are the last remnants of an armed group that seized the Malheur National Wildlife Refuge on Jan. 2 to oppose federal land-use policies.

Fry said Wednesday the group was surrounded by armored vehicles.

A Nevada legislator, Michele Fiore, called in to try to get the occupiers to calm down. Fiore said she could help them only if they stayed alive.

“I need you guys alive,” said the Republican member of the Nevada Assembly who was in Portland earlier in the day to show support for Ammon Bundy, the jailed leader of the occupation. Fiore told occupiers Wednesday night she was driving to the refuge to try to help negotiate their exit from the refuge. The occupiers prayed with Fiore and others as the situation dragged on for hours Wednesday night.

Sean Anderson said late Wednesday he spoke with the FBI and that he and the three other holdouts would turn themselves in at a nearby FBI checkpoint at 8 a.m. Thursday.

Anderson relayed the news to Fiore. “We’re not surrendering, we’re turning ourselves in. It’s going against everything we believe in,” he said.

Greg Bretzing, special agent in charge of the FBI in Oregon, said in a statement the situation had reached a point where it “became necessary to take action” to ensure the safety of all involved.

Bretzing said one of the occupiers rode an ATV outside “the barricades established by the militia” at the refuge. When FBI agents tried to approach the driver, Fry said he returned to the camp at a “high rate of speed.”

The FBI placed agents at barricades ahead of and behind the occupier’s camp, Bretzing said.

“It has never been the FBI’s desire to engage these armed occupiers in any way other than through dialogue, and to that end, the FBI has negotiated with patience and restraint in an effort to resolve the situation peacefully,” he said in a statement.

Authorities had for weeks allowed the occupiers to come and go freely from the remote refuge, leading to criticism from local and state officials that law enforcement wasn’t doing enough to end the situation.

Group leader Ammon Bundy and others were arrested Jan. 26 on a remote road outside the refuge, but the four holdouts remained.

On Wednesday night Sandy Anderson said after the group was surrounded, “They’re threatening us. They’re getting closer. I pray that there’s a revolution if we die here tonight.”

Her husband, Sean Anderson, said in the livestream, “We will not fire until fired upon. We haven’t broken any laws, [we] came here to recognize our constitutional rights.”

The occupiers said they saw snipers on a hill and a drone.

The standoff was occurring on the 40th day of the occupation, launched by Bundy and his followers to protest prison terms for two local ranchers on arson charges and federal management of public lands.

Bundy was arrested last month as he and other main figures of the occupation were traveling to the town of John Day. Four others were also arrested in that confrontation, which resulted in the shooting death of the group’s spokesman, Robert “LaVoy” Finicum. The FBI said Finicum was reaching for a gun.

Most of the occupiers fled the refuge after that. Authorities then surrounded the property and later got the holdouts added to an indictment charging 16 people with conspiracy to interfere with federal workers.

At first, Bundy urged the last holdouts to go home. But in response to the grand jury indictment, he took a more defiant tone from jail.