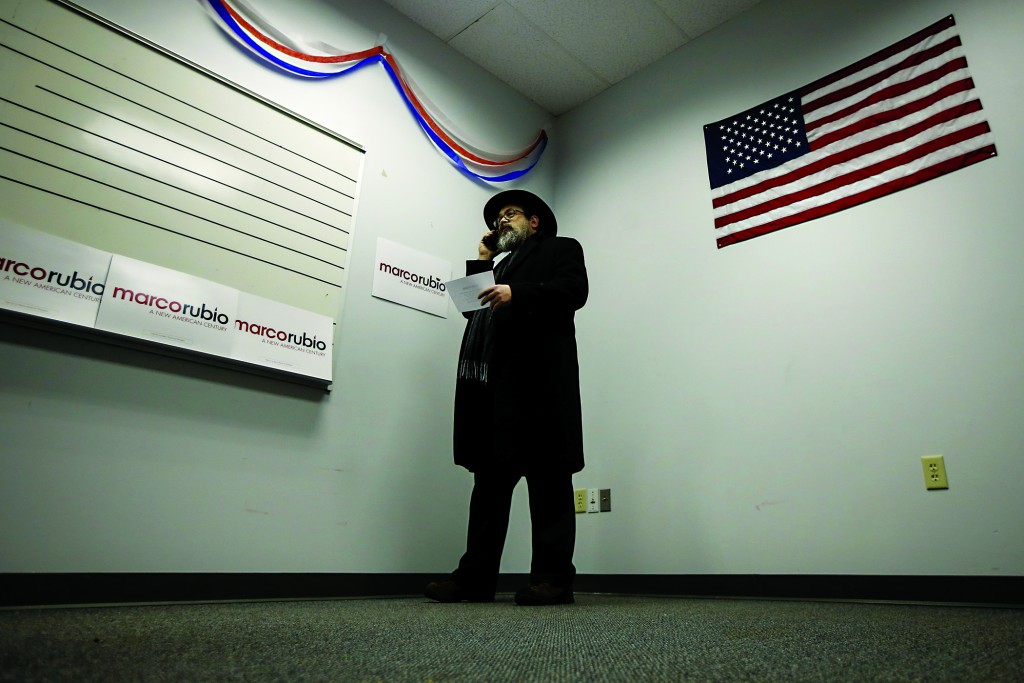 New Hampshire has a population of roughly 1.3 million, about half the population of Brooklyn, but as the first state to hold a party primary, it wields a hefty influence over the presidential nominating process.

Coupled with this disproportionate power is a political fever that grips the state for months — even years — in the lead-up to primary day. Hamodia reached out to members of New Hampshire’s Jewish population, estimated at 10,000, to hear firsthand their take on the small state’s day in the national spotlight.

“I just passed by the high school [where ballots were being cast] and there was a line that stretched for a mile across both sides of the street. Everybody is going to vote,” Merrimack native Devorah Hayman told Hamodia on Tuesday. “[New Hampshire residents] are obsessed with politics, more than anyplace else.”

The Granite State’s hyper-interest in elections is hardly one-sided. For more than a year before the primary takes place, potential candidates begin spending an increasing amount of time in there. As February draws near, those who have declared candidacy begin heavy canvassing, holding rallies, shaking hands, and kissing babies in towns and cities in all corners of the small state.

Sol Rockenmacher, a pediatric cardiologist from Manchester, said that the close contact candidates have with citizens goes a long way in generating the state’s unique political energy. “You can get so close to the candidates. If you want to, you can meet all of them,” he said.

Though in California on Tuesday, Dr. Rockenmacher and his wife voted by absentee ballot and said that heightened interest and turnout are also driven by New Hampshire’s position in opening the nation’s presidential election. “We are very proud of having the first primary; it’s a state tradition,” he said.

Brian Grodman, a financial planner also from Manchester, has taken full advantage of the personal touch that candidates extend to New Hampshire residents and has met, albeit very briefly, 15 of them. The quick photo ops, he said, were not enough time to get much of a feeling of what distinguishes one from another. “None stands out as being far different than the others, but I only met them each for an average of two minutes,” he said.

Mr. Grodman said that on primary day the streets of Manchester, the state’s largest city, with a population of 110,000, were teeming not only with voters, but with hundreds of news reporters from all over the country. The pitched excitement that grips the state’s populace in election years, he said, is indescribable.

“Unless you’ve been here and seen it, you can’t understand what it is. The level of interest in the race doesn’t come close anywhere else in the country.”

Rabbi Levi Krinsky of Chabad of Manchester, one of the state’s few Orthodox shuls, said that talk of elections has dominated the interest of his mispallelim for some time.

“Every two years, they start to get ready for the next two years, as candidates start to come and smell around,” he said. “We’re a small shtiebel of 20 or 30 people, but it comes up at every kiddush.”

This past Motzoei Shabbos, Rabbi Krinsky got a close-up view of the top tier of GOP candidates as he attended their most recent debate.

“They are all good speakers. They know that if they don’t do well here, their campaigns lose steam, so they put a lot of effort into it.”