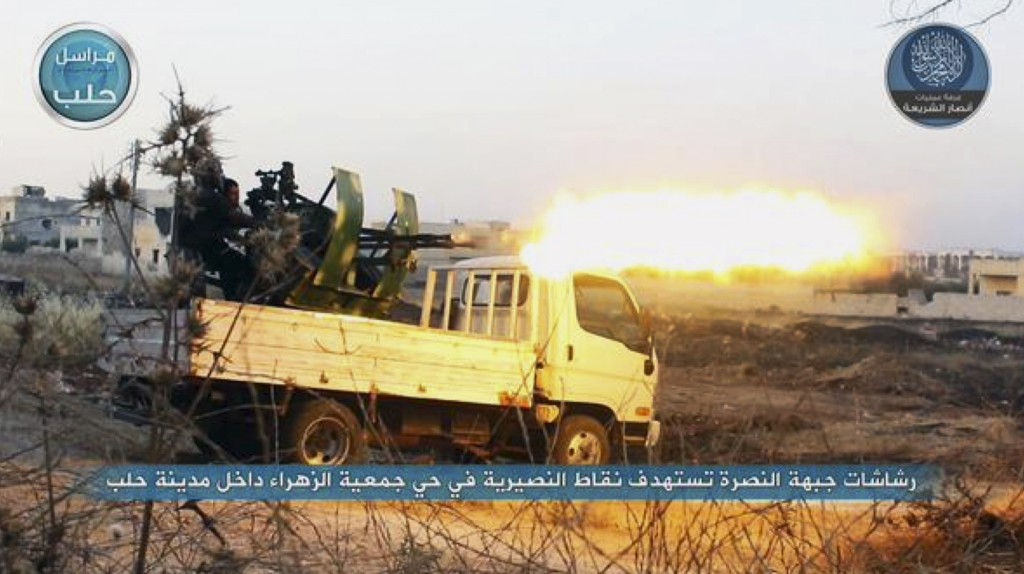 The two villages, Nubl and Zahra, are located in the middle of opposition territory. They have been blockaded by rebel groups for around three years, with the army occasionally airdropping food and other assistance.

Their capture would mark a major victory for government forces, which have made significant advances in Aleppo province in the past few days, severing a key supply route linking rebels in Aleppo city to the Turkish border.

On Wednesday, pro-government fighters continued their offensive north of Aleppo, Syria’s largest city, in an attempt to besiege rebel-held neighborhoods. If the government succeeds, it will be one of the biggest blows to insurgents since they captured large parts of the city in the summer of 2012.

The Aleppo advances cast a further shadow over indirect peace talks in Geneva.

Basma Kodmani, a member of the opposition’s negotiating team, described the offensive as a “horrible development,” saying it sends the message that “there is nothing to negotiate. Just go home.”

“We’re not going home,” she said in an interview with The Associated Press.

Syrian media said the siege of Nubl and Zahra was broken by the army and Shiite militias known as the Popular Defense Committees. The Hizbullah-owned Al-Manar media network also reported the advance and showed exclusive footage of the fighting on the outskirts of the villages.

The Britain-based Syrian Observatory for Human Rights, an opposition group that monitors the conflict through activists on the ground, said the Syrian army was one kilometer (mile) away from the two villages.

Meanwhile, an aid convoy headed to a besieged rebel-held town near Damascus, but Syria’s opposition said Wednesday that such deliveries are meaningless given the situation in Aleppo.

The convoy heading to Moadamiyeh is the second aid delivery to rebel-held areas near the capital in as many days, a spokesman for the International Committee for the Red Cross said. Pawel Krzysiek told The Associated Press that 12 trucks carrying food, medicine and medical equipment were expected to arrive later in the day.

By late afternoon, Krzysiek said the convoy is “about to enter.” He posted a photograph on his Twitter account showing hundreds of people gathered at a distance waiting for the supplies to reach them.

The humanitarian situation in the town worsened toward the end of last year after the government choked off the last access point. Opposition activists and residents say there are dozens of cases of severe malnutrition in Moadamiyeh.

The aid delivery appears to be a confidence-building gesture on the part of the government after U.N.-mediated indirect peace talks got off to a rocky start in Geneva this week.

The Syrian opposition had demanded that aid be allowed into 18 besieged areas throughout the country and that Syrian and Russian forces halt the bombardment of rebel-held areas ahead of the talks, which officially began Monday.

Kodmani called the latest aid delivery a “positive development,” but said “it is way below what we are hoping to see happen.”

On Wednesday afternoon, Riad Hijab – a former Syrian prime minister who now heads the High Negotiations Committee, the largest opposition bloc – arrived in Geneva to be closer to the talks.

Shortly after he arrived, U.N. envoy Staffan de Mistura arrived at the hotel where the opposition members are staying and went into a meeting with them.

Syrian opposition figure George Sabra told AP earlier in the day that after Hijab’s arrival the opposition will hold meetings on whether to drop out of the indirect peace talks.

“We should take a decision in the coming two days,” Sabra said.

De Mistura has shuttled between the government and opposition delegations in Geneva. On Monday, he formally declared the start of what he calls “proximity talks” between the two sides, which would have the two delegations seated in separate rooms.

The talks are aimed at ending a war that has killed 250,000 people, displaced millions and left much of the country in ruins. The last round of talks broke down in 2014.