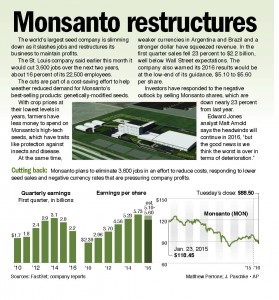 U.S. stocks jumped Tuesday as the price of oil made another abrupt reversal, this time rising almost 4 percent after falling sharply the day before.

Quarterly earnings contributed to many of the biggest moves of the day. Procter & Gamble reported a larger profit in the fourth quarter as it raised prices and cut costs. The maker of Pantene shampoo, Crest toothpaste and Charmin toilet paper added $1.96, or 2.6 percent, to $78.81.

3M, which makes industrial coatings and ceramics, reported a greater profit and more revenue than analysts expected. It rose $7.21, or 5.2 percent, to $144.78.

The& Dow& had its best day since early December. Many of the companies making the biggest gains, including Exxon, Chevron and 3M, are& Dow& components. The Nasdaq made smaller gains because tech stocks didn’t rise as much as the broader market.

Huntington Bancshares agreed to buy competitor FirstMerit Corp for $3.4 billion. The deal would create the largest bank in Ohio, and the companies would have about $100 billion in combined assets. FirstMerit added $2.82, or 18.3 percent, to $18.19 and Huntington lost 75 cents, or 8.5 percent, to $8.50.

Sprint, the fourth-largest wireless provider in the U.S., posted a smaller loss in its third quarter and said its aggressive promotions lured in more users. The company raised its outlook for the year.

Sprint’s stock rose 47 cents, or 18.7 percent, to $2.99. The stock, which hit an all-time low last Wednesday, has been on a wild ride the last few days, jumping almost 15 percent Friday and then falling 12 percent Monday, when Sprint said it had cut about 2,500 jobs since last fall, or 8 percent of its staff.

While the market made broad gains and undid most of Monday’s losses, it’s still down substantially this year and there are signs investors have big worries about the global economy.

“Fear is the biggest driver,” said Guy LeBas, chief fixed income strategist for Janney Capital. LeBas said investors are also anticipating weaker inflation and think the Federal Reserve will be more cautious about raising interest rates because the market has experienced so much turmoil this month.

U.S. government bonds get more popular with investors when the economy looks dicey because the U.S. government is extremely likely to make good on its debt. Investors are willing to accept lower interest payments when they are concerned about safety.

When yields on longer-term bonds like the 10-year bond fall toward the yield on short-term bonds, it signals that investor expectations for future growth have dimmed.