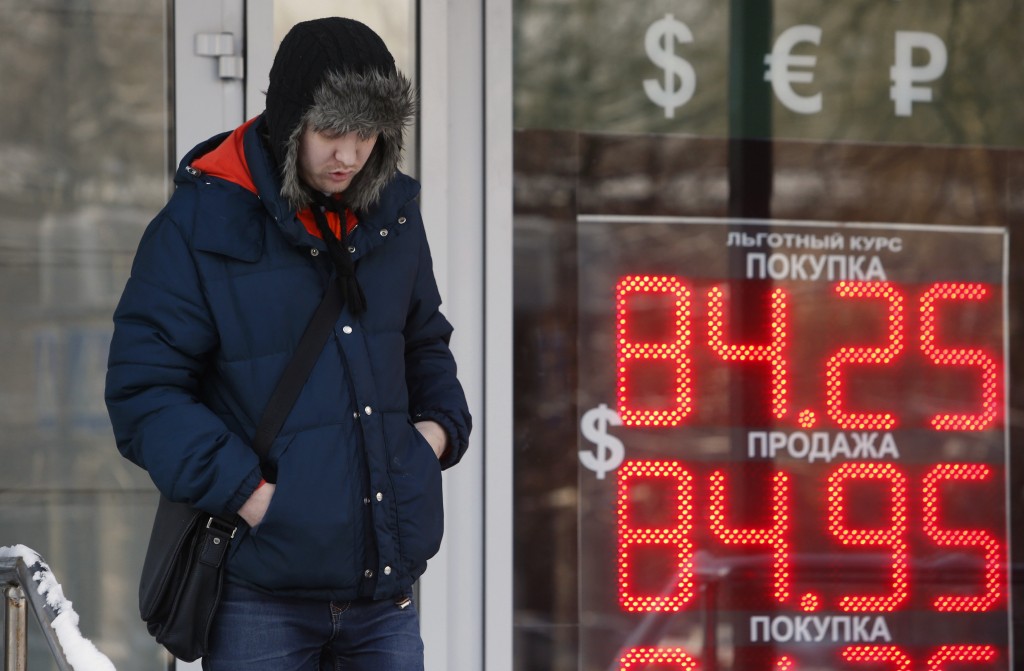 The Russian ruble has hit another historic low against the dollar as currencies slid across the former Soviet Union against the backdrop of low oil prices.

The ruble traded above 85 to the dollar for the first time in Moscow early Thursday afternoon, a fall of more than three percent, which beat the previous low of 82.4 to the dollar set in trading Wednesday evening. It later recovered slightly to trade around 84.2.

Thursday’s slip means the ruble is at its lowest level since the currency was redenominated in 1998, during Russia’s worst post-Soviet economic crisis. President Vladimir Putin’s spokesman Dmitry Peskov, however, said the situation was not critical.

“I wouldn’t use the word ‘collapse.’ The rate is really changing, the rate is volatile, but it’s far from a collapse,” he said Thursday in comments reported by Russian news agencies. Putin has no plans for any emergency meetings, he added.

The steep decline in oil prices — now at a 12-year low below $28 a barrel — has been a severe blow to Russia’s oil-dependent economy. The ruble’s new lows this week follow the lifting of international sanctions against Iran, which increases the supply of oil on global markets.

The IMF predicted Tuesday that Russia’s economy will contract 1 percent in 2016 following a fall of 3.7 percent last year, before returning to 1 percent growth next year. The ruble has lost more than half its value against the dollar in the last two years.

Also Thursday, the Russian central bank said it had revoked the license of Vneshprombank, one of the country’s top 50 lenders, after finding evidence that “persons exercising control over the bank” had stripped its assets, adding that law enforcement would be involved in tracking the missing money. The funds may have been spent in Russia, Europe and the U.S. on property such as real estate, shares and “expensive vehicles,” the central bank said in a statement.

Thursday’s fall in the ruble was accompanied by slides in other post-Soviet currencies. The Belarusian ruble slid 5.1 percent to the dollar, trading at 21.564 Thursday afternoon. It has lost around 14 percent of its value against the dollar since January 1.

In the Central Asian nation of Kazakhstan, another major ex-Soviet oil producer, the tenge currency fell to a record 383.91 against the dollar Thursday as the economy feels the pressure of low energy prices. Central bank head Daniyar Akishev ruled out introducing capital controls and said he did not expect major shocks for the country’s balance of payments since “most of the negative scenarios … have already happened.”