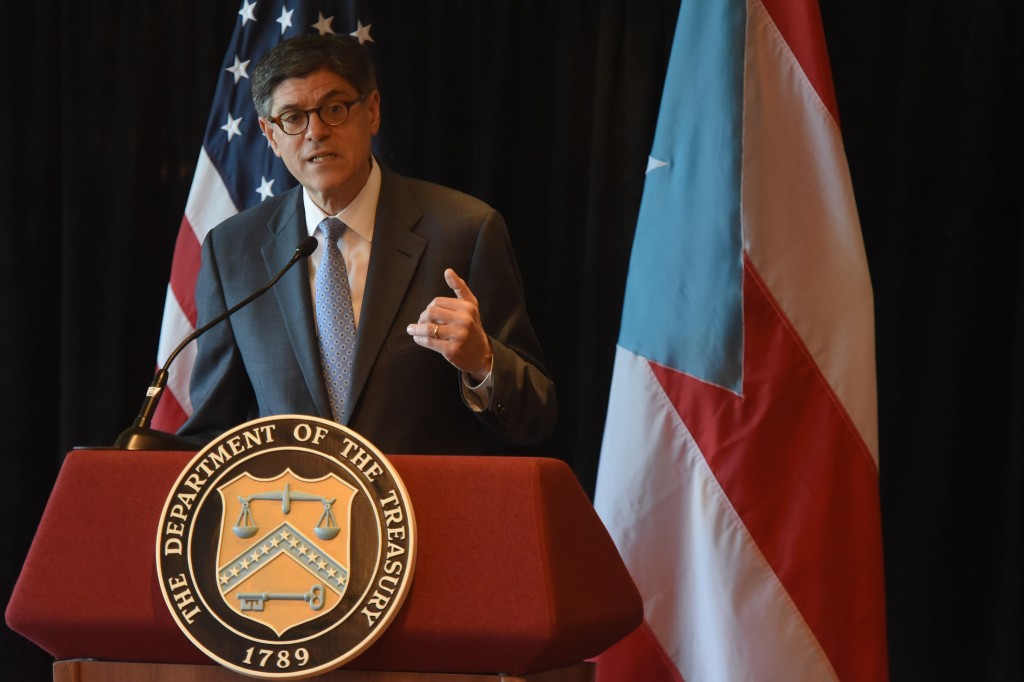 Treasury Secretary Jacob J. Lew said that Congress needs to act without delay to help Puerto Rico deal with a worsening fiscal crisis, as he visited the island for the first time to witness the impact on the local economy.

“Only Congress can enact the legislative measures necessary for Puerto Rico to resolve this problem,” he said at a news conference in San Juan on Wednesday. “The people of Puerto Rico are sacrificing, but unless that sacrifice is shared by creditors in an orderly restructuring, there is no path out of insolvency and back to growth.”

Lew reiterated the Obama administration call for bankruptcy powers for Puerto Rico, paired with independent fiscal oversight, additional health care funding and employment incentives. Republicans say they need more information about the island’s financial situation before they draft a bill and some investors oppose granting Puerto Rico restructuring powers, saying that would change the rules under which the debt was issued.

“Without congressional action, Puerto Rico will face a long and difficult recovery that could have harmful consequences for the American citizens who call the island home,” Lew said. “That is why we have called on Congress to act without delay.”

House Speaker Paul Ryan has called for a solution for Puerto Rico by the end of this quarter and Lew described that deadline urgent and meaningful. Puerto Rico’s Government Development Bank owes investors $422 million in May. The commonwealth and its agencies owe $2 billion on July 1, on the heels of an anticipated $923 million negative cash balance in June.

Congressional Republicans are calling for a federal control board. If one is enacted, it must respect Puerto Rico’s rights and has to be paired with access to bankruptcy, Puerto Rico Gov. Alejandro Garcia Padilla said at a separate news conference following a meeting with Lew on Wednesday.

Lew is meeting with Puerto Rico officials as the commonwealth says its fiscal crisis is worsening. The island now estimates it will be $16.06 billion short in paying principal and interest during the next five years, up from a $14 billion projection in September, according to a revised fiscal and economic growth plan released Monday. That financing deficit will grow to $23.9 billion through 2025.

Island officials are working on a debt-restructuring proposal to offer creditors such as hedge funds, municipal mutual funds and insurance companies that guarantee repayment of commonwealth’s $70 billion debt burden. That plan may involve a debt exchange where investors accept losses on their securities or wait longer to be repaid.

Puerto Rico avoided defaulting on its general-obligation debt at the start of the year by taking revenue originally used to repay agency bonds. That prompted the Infrastructure Finance Authority to miss a $35.9 million interest payment and fueled speculation that other agencies would eventually follow suit.

The commonwealth and its agencies racked up debt after borrowing for years to fix budget gaps as the island’s economy has contracted every year but one in the past decade. Its 12.5 percent unemployment rate is higher than any U.S. state and more than double what it is in the U.S. Residents have left the island to seek work on the mainland, resulting in a 9.2 percent population drop since 2004, according to U.S. Census data.