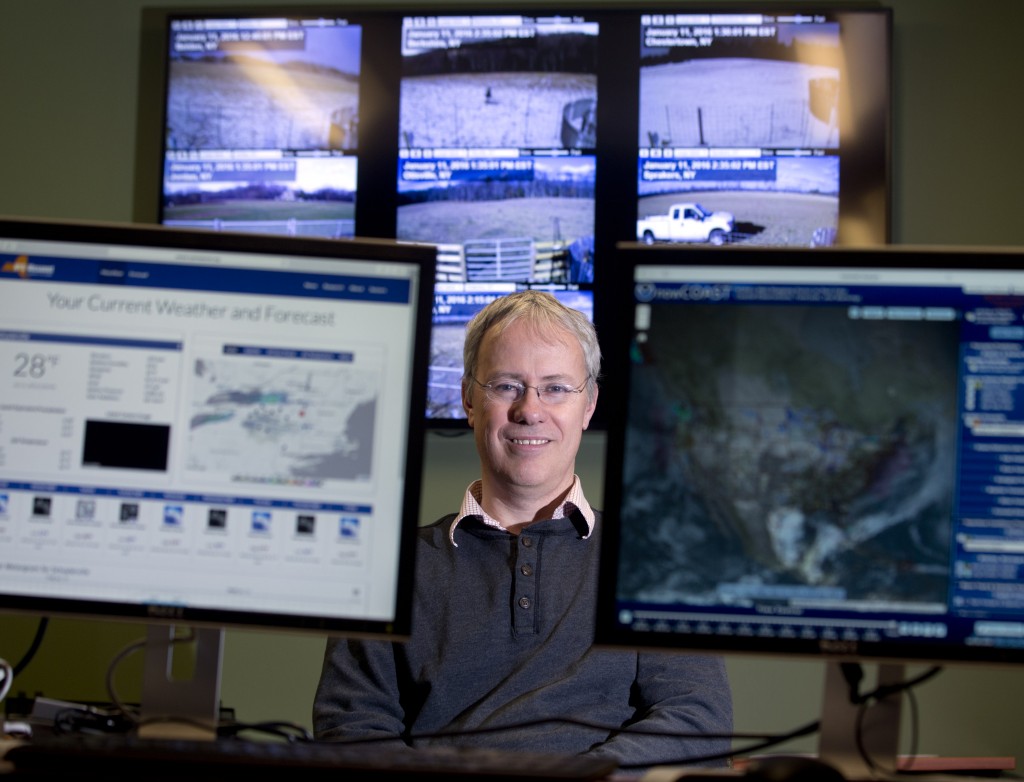 Counting every raindrop or measuring every gust of wind is impossible, but New York is getting closer with a uniquely extensive statewide system of automated weather stations that should paint a dramatically clearer picture of developing storms.

Described as the new “gold standard” of automated systems, the long-planned network of 125 weather stations stretching from the shores of Lake Erie to the tip of Long Island is expected to be completed by the end of the year.

Fourteen stations are already transmitting temperature, pressure and other data every five minutes. When all the stations are operating, forecasters, emergency officials and ordinary weather wonks will be able to get a fine-grained look – a million data points a day – that will hopefully lead to better predictions.

“That’s the problem with the current network. There are serious gaps and so you can’t see enough of the weather as it’s evolving,” said Chris Thorncroft, chairman of the University at Albany’s atmospheric and environmental sciences department.

Thorncroft is helping lead the development of the New York State Mesonet, which is being funded with a $23.6 million grant from the Federal Emergency Management Agency. The new system will augment the 27 stations now used by federal forecasters.

People in New York will never be more than 25 miles from a station. The new system will also take in types of data that the current stations do not, such as soil temperature and moisture, and solar radiation. Each site even transmits pictures every five minutes.

Slightly more than half the states have some kind of network of stations augmenting those the federal government relies on. But the dense and sophisticated network being built in New York will surpass the sophistication of the current “gold standard” system in Oklahoma, according to Curtis Marshall, the National Mesonet program manager.

Discussions about a New York Mesonet began in earnest after the Catskills were deluged by the remnants of Hurricane Irene in 2011, Thorncroft said. Record-setting rain had fallen in areas without a gauge, leading to delayed information, he said. A year later, Superstorm Sandy sent a surge into the New York City area and killed 53 people in the state.

Gov. Andrew Cuomo has been promoting the weather detection system since 2014, though not always in a welcoming way. The governor mentioned the coming forecast improvements that November as the Buffalo area dug out from a jaw-dropping 7 feet of snow. His claim that the weather service was “off” in its own snow forecast turned out to be fighting words to meteorologists who had spent days warning about a major storm.

Actually, the National Weather Service will take the data into their own system and use it for their own forecasts. Raymond O’Keefe, meteorologist-in-charge at the service’s Albany bureau, said forecasters have already used data from the existing stations to check on whether local ground was frozen before a recent soaking rain as a way to forecast runoff. The attraction to O’Keefe is simple: more data going into models, better data coming out.

Utilities and other businesses wanting the data sent to them will pay a fee.

New York’s Mesonet is temporarily housed in a sub-basement at the University at Albany until newer space is ready elsewhere around the campus. The automated stations will look pretty much the same, with 30-foot metal towers topped by wind sensors. Most are being built in open fields, though five New York City stations will be on rooftops. Some of the stations, mostly in the Adirondack Mountains and the adjacent Tug Hill Plateau, will measure snowfall.

Significantly, 17 stations will be able to measure conditions in the atmosphere miles above, a job done now on a much more limited basis by weather balloons. Marshall, at the National Weather Service, said such “vertical profiling” is done in some other areas, but not in the systematic way New York is deploying them.

Thorncoft called the array of profilers a “game changer,” since they will provide much more real-time information about three-dimensional aspects of the atmosphere.

“Knowing what’s happening now will allow you to say something intelligent about the next few hours,” he said.