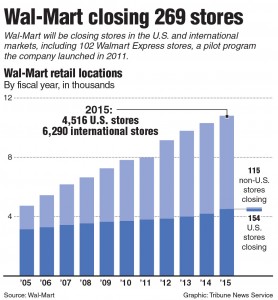 Wal-Mart Stores Inc. said Friday that it will close 269 of its stores globally, including 154 in the U.S., as the company looks to reposition itself in a difficult retail climate.

The closures include Walmart and Sam’s Club locations and will affect 16,000 employees globally, about 10,000 of whom are in the U.S.

The Bentonville, Ark. company said more than 95 percent of the affected stores in the U.S. are within 10 miles of another of its stores, and it hopes employees can transfer.

The company said it would provide 60 days of pay if employees are unable to be transferred, and severance for those eligible.

“The decision to close stores is difficult and we care about the associates who will be impacted,” Wal-Mart Chief Executive Doug McMillon said in a statement. “We invested considerable time assessing our stores and clubs and don’t take this lightly.”

In the U.S., the company will shut all 102 Walmart Express locations — a pilot program started in 2011 to appeal to customers who wanted smaller-format stores. Wal-Mart will also close 23 Neighborhood Markets, 12 Supercenters, seven stores in Puerto Rico, six discount centers and four Sam’s Clubs.

The retailer said it will focus more on e-commerce and expanding pick-up services for customers. Wal-Mart also said it would open 50 to 60 new Supercenters, 85 to 95 new Neighborhood Markets and seven to 10 new Sam’s Clubs across the U.S. in fiscal 2017.

Analysts said the store closures are a way for the retailer to capitalize on food sales and expand its “multi-channel” strategy by allowing pick-up for online and in-store purchases.

“We believe Wal-Mart’s announcement of store closings this morning is just a ‘pruning’ of its voluminous network,” said Charlie O’Shea, Moody’s lead retail analyst, in a statement.

Worker advocates said they fear this could be the beginning of a slew of cuts.

“This sends a chilling message to the company’s hard-working employees that they could be next,” said Jess Levin, communications director for Making Change at Walmart, in a statement.

Making Change at Walmart is a coalition anchored by the United Food and Commercial Workers International Union that is pushing for better pay and benefits at the retailer.

Wal-Mart is just the latest chain to announce store closures after the retail industry struggled through the year-end shopping season.