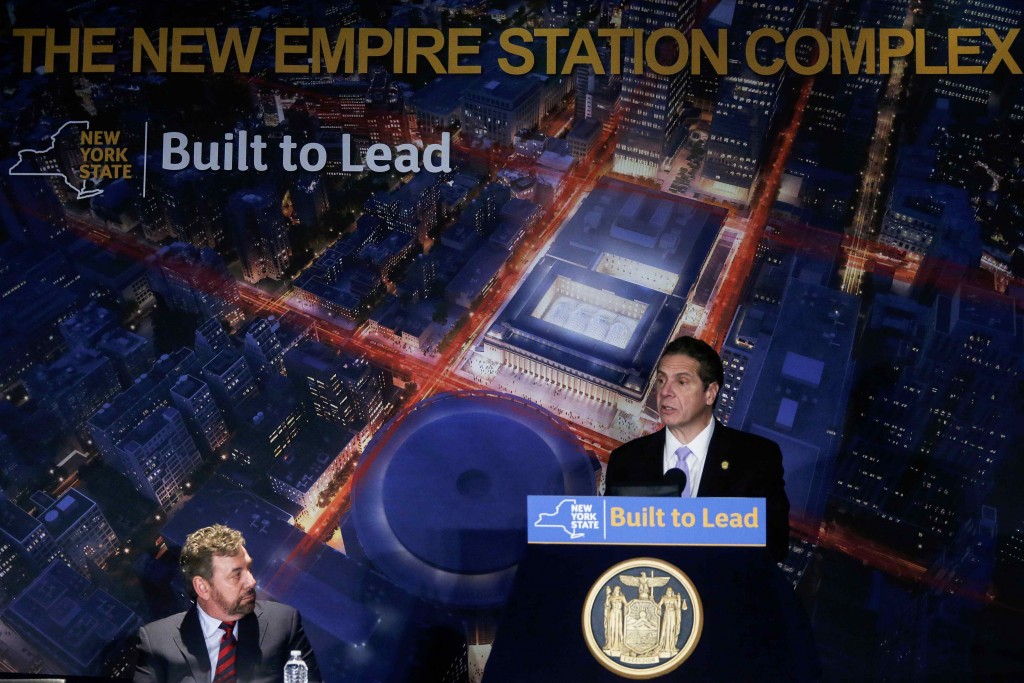 Calling the nation’s busiest train station “dark” and “ugly,” Gov. Andrew Cuomo on Wednesday announced a restart of the long sought-after overhaul of Penn Station, a project that could cost up to $3 billion and include improvements like bringing natural light into the congested maze underneath Madison Square Garden.

The governor threw his weight behind a makeover of Pennsylvania Station and announced a $22 billion investment in upstate roads and bridges, ahead of his annual keynote address next week. He is presenting parts of a program he will wrap together in his State of the State address, when he has promised to lay out “the largest construction program in the modern history of the state.”

Cuomo touted the Penn Station development plan — a $3 billion project separate from the $22 billion program — as the center of a modernized transport network that will link airports, commuter rail networks, and redeveloped roads with the wider region.

“It’s going to make the state for the next 100 years,” he said at a meeting in Madison Square Garden, which sits atop a large portion of Penn Station.

“Penn Station is un-New York,” said Cuomo, a Democrat. “It is dark. It is constrained. It is ugly.”

Cuomo has consistently tied his governorship to infrastructure projects and has spent this week invoking golden periods in the state’s industrial past, such as the construction of the Erie Canal and the interwar highway and bridge legacy of Robert Moses, New York’s “master builder.”

In his presentation Wednesday, Cuomo recalled how Erie Canal transformed New York into a business powerhouse in the 19th century, and the series of Hudson River bridges and tunnels “opened the entire region to growth.”

“New York’s economic success for the next 100 years depends on our ability to plan and build now,” he said. “New York’s tomorrow depends on what we do today.”

The Penn Station plan, in its most ambitious form, calls for the redevelopment of the adjacent historic James A. Farley post office building as a new station concourse.

Other ambitious proposals include modernizing Kennedy Airport, revamping LaGuardia Airport and for the first time connecting it via AirTrain to the MTA.

Authorities will issue a call this week for proposals from the private sector to design, build and finance the redevelopment. They aim to attract private capital in return for the retail rights at the facility, through which 650,000 commuters and long-distance rail passengers pass each day.

Also on Wednesday, Cuomo said he would dedicate $1 billion to reducing tolls on the New York Thruway, a 570-mile highway that starts on the northern border of New York City, runs north to Albany and ends at Pennsylvania state line in the west.

What he called a “toll protection program” would freeze tolls until 2020, eliminating tolls entirely on agricultural traffic, and provide a tax credit for frequent users that would reimburse 50 percent of annual cost of use.

Cuomo is also calling for $2 billion in funding to replace and upgrade bridges and pave state and local roads.

“We want to bring down that cost of doing business,” the governor said of Thruway travel. “It will send a tremendous, tremendous signal to businesses that this is a much different state than ever before.”