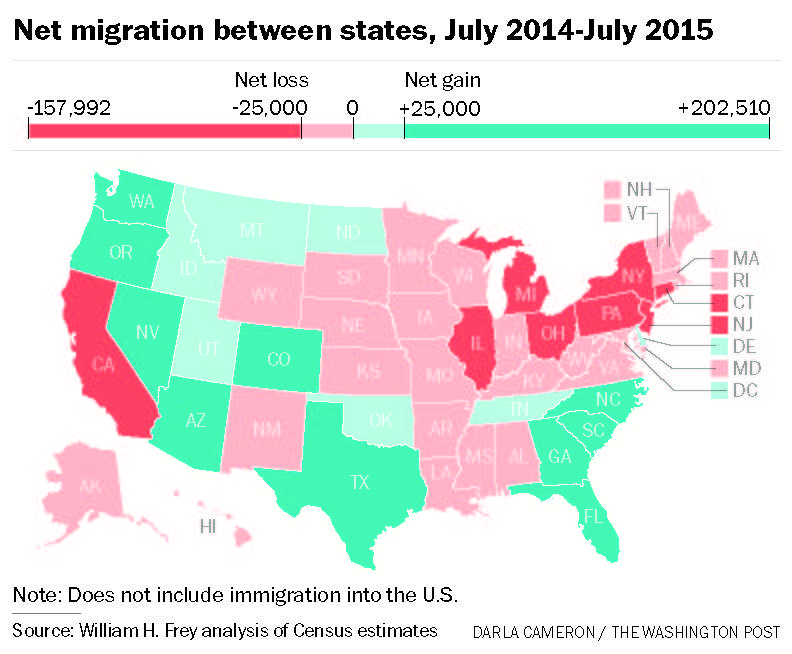 When the U.S. economy slowed during the recession, so did one of the major demographic shifts of the last several decades. For a brief respite, the Northeast and Midwest stopped shedding quite so many residents to the burgeoning Sun Belt. That trend, though — which has big consequences for politics, among other things — has been picking back up.

New Census data shows the trend accelerating back to its pre-recession pace. Florida, which actually lost more domestic movers than it gained right after the housing bubble burst, picked up about 200,000 net new movers between 2014 and 2015 (this number includes people who move between states, not immigration into the United States from abroad). Illinois, meanwhile, had a net loss of about 105,000 residents, its largest one-year population leak in the 21st century.

The District of Columbia, perched between the North and South, has been a winner, too.

The other big gains over the past year were Texas (170,000 new migrants), Colorado (54,000), and Arizona and South Carolina (both with more than 45,000 each). Not a single state in the Northeast or Midwest gained domestic movers over the last year. 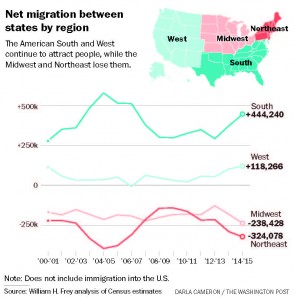 Several long-term trends dating as far back as the 1960s are behind this larger pattern. The rise of air conditioning and interstate highways have made once-sleepy (and sweltering) southern cities more appealing. And, over the same time, the decline of industrial jobs in the Midwest and Northeast have pushed people out. Cheap housing during the boom years also drove growth in states such as Arizona and Nevada.

For states like New York, domestic migration losses are offset by new immigration from abroad. But for many places in the Rust Belt, these shifts will mean more empty houses and “shrinking cities,” and less political clout.