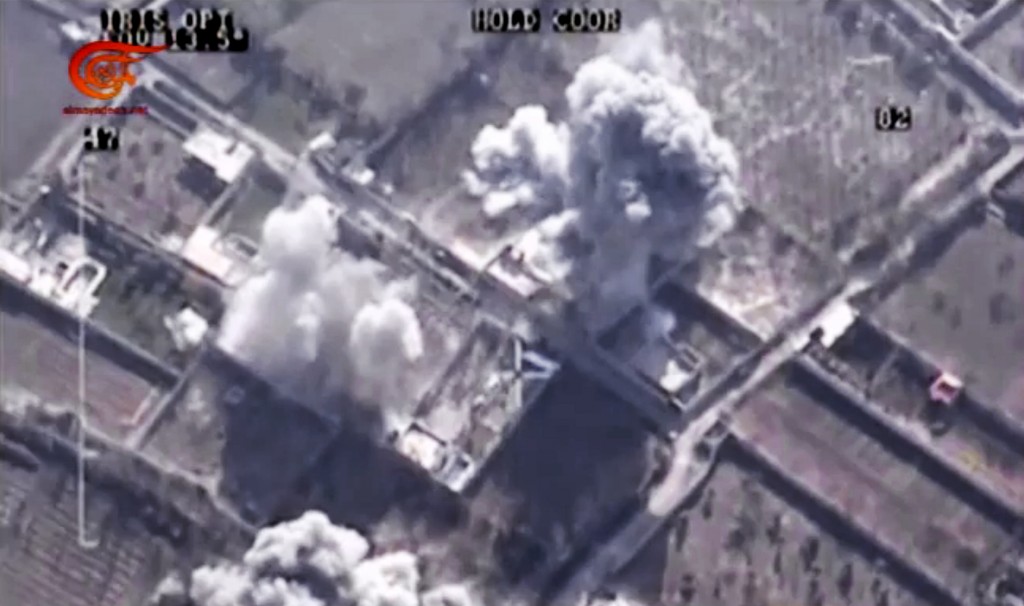 The explosion, which took place late Saturday, was the latest blow to the rebels shortly after the assassination the previous day of a powerful rebel leader on the outskirts of Damascus. The developments could boost the position of the Damascus government ahead of Syria peace talks in Geneva next month.

The Britain-based Syrian Observatory for Human Rights reported the explosion in the village of Kfar Shams. Ahmad al-Masalmeh, a Daraa-based opposition activist, said explosives were planted at the farm and were detonated when the militants had gathered there.

“Once the fighters entered the farm, the explosives were detonated, killing 17,” al-Masalmeh said.

Syria’s state news agency reported that several fighters of the Islamic Muthana Movement were killed and two of their “dens were demolished at Kfar Shams.”

In Turkey, gunmen fatally shot Syrian activist Naji al-Jarf as he walked in a street in the southern city of Gaziantep, according to the Observatory and the Syrian opposition’s Shaam Network news group. Al-Jarf was the editor-in-chief of pro-opposition Hinta Magazine, according to Shaam Network.

The Observatory’s chief, Rami Abdurrahman, said al-Jarf was killed with a pistol outfitted with a silencer, adding that the motive for the killing was unknown.

No one immediately claimed responsibility for the slaying. In October, the Islamic State terror group said it was behind the killing of two opposition activists in the southern Turkish city of Sanliurfa.

The identities of the Islamic fighters killed in the farm explosion were not immediately known and it was not clear if they all belonged to the Muthana Movement or other factions. The movement itself is a relatively minor Daraa-based group of Islamic insurgents.

The area where the attack occurred is in a triangle that links Damascus suburbs with the southern regions of Daraa and Quneitra. The village itself is known to house many chicken farms, which supply large parts of Syria with eggs. The attack apparently took place in one of the chicken farms.

During past months, the area has been the scene of intense clashes that have pitted Syrian troops and their allies from the Lebanese terrorist group Hizbullah against an array of Islamic insurgent groups, including the Muthana Movement.

President Bashar Assad’s forces have been on a major push since Russia began its air campaign in Syria on Sept. 30. Syrian troops and allied militiamen have launched ground offensives in different parts of the country, including areas near the capital, Damascus.

On Friday, Zahran Allouch, the leader of the powerful rebel Army of Islam, was killed in an airstrike that targeted the group’s headquarters during a meeting. A number of senior commanders of the Army of Islam and those of the ultraconservative Ahrar al-Sham and the Faylaq al-Rahman groups were also killed.

The Syrian army claimed responsibility for the airstrike that killed Allouch, although many among the opposition blamed Russia, which has been bombing IS targets and other insurgent groups.

Allouch’s death was cheered by government supporters and the rival Islamic State – a reflection of his role in fighting both sides in the Syrian civil war.

His death may have contributed – at least partially – to a delay in an agreed-on pullout of thousands of militants and their families from neighborhoods on the southern edge of Damascus.

Khaled Abdul-Majid, a Damascus-based Palestinian official, said in a statement Sunday that the agreement had stumbled following Allouch’s killing. Buses that were to transport the fighters from Yarmouk were supposed to pass through Army of Islam-controlled Beir al-Qassab area in the southeastern countryside of Damascus.

The pullout, supposed to start on Saturday, was to involve mainly terrorists from the Islamic State group who earlier this year overran the Yarmouk area, which is home to a Palestinian refugee camp and has been hotly contested and fought-over in the war, and two adjacent neighborhoods.