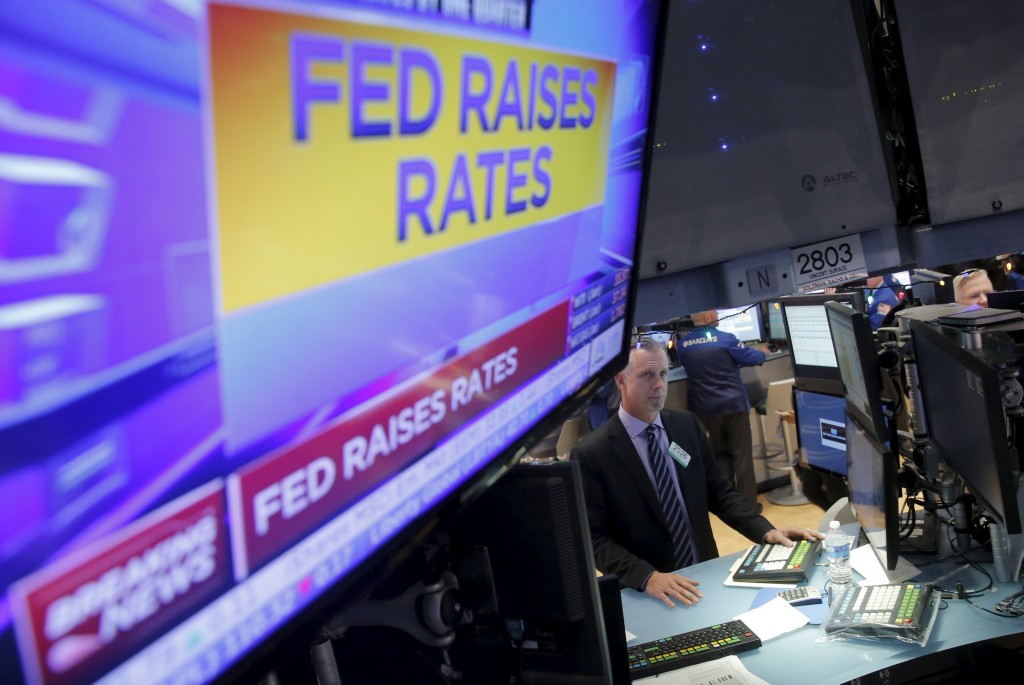 World stock markets jumped on Thursday as investors chose to take the first hike in U.S. interest rates since 2006 as a mark of confidence in the world’s largest economy.

The long-anticipated though modest increase in the federal fund rate also lifted the dollar but piled more pain on oil.

Asian shares had got the day off to solid start, but things really starting rocking in Europe. Germany’s DAX surged over 3%, its biggest rise since August, and Britain’s FTSE 100 and France’s CAC 40 leapt 1.4% and 2.5% respectively. Wall Street was expected to open at least 0.4% higher.

China allowed its currency to slip for a 10th straight session, with the yuan reaching its lowest since June 2011. The steady decline puts pressure on other Asian currencies to depreciate to stay competitive.

Federal Reserve Chair Janet Yellen’s assurances that further tightening would be gradual and dependent on inflation soothed markets after the Fed’s first rate increase in nearly a decade, which followed months of waiting and several false starts.

“They delivered what was the world’s worst-kept secret,” said Neil Williams, chief economist at fund manager Hermes in London. “It was extremely well-telegraphed, which I think is a sign of things to come.

“Central banks now have a lot of skin in the game because of their hugely bloated balance sheets. So if they take markets off-guard, they get hurt themselves.”

The rate forecasts, or dot points, from Fed members were a little higher than many expected, with 100 basis points of hikes penciled in for next year and a terminal rate of 3.5%.

Moves in the Treasury market were also modest. While yields on two-year notes touched their highest since April 2010, they had barely budged ahead of U.S. trading at 1.0047%.

The premium over German yields nevertheless widened to 134 basis points, pretty much the biggest since late 2006 and a positive draw for the dollar.

The dollar added 1% to 98.910 against a basket of major currencies, and looked set for another test of stiff resistance around the 100.00 mark.

Richard Franulovich, a currency strategist at Westpac, noted that historically the dollar tended to soften at the start of Fed tightening cycles. Yet he doubted it would last, given most other major central banks were very much in easing mode.

“A follow-up Fed hike could come as soon as March, aided and abetted by favorable oil price base-effects that will lift inflation almost a percentage point and a potentially mild winter,” said Franulovich.

“We should see a resumption of the dollar’s longer-term uptrend as 2016 progresses.”

Another sustained rise in the dollar could spell further trouble for commodities, by making them more expensive when measured in other currencies.

Oil prices were struggling again too, having resumed their decline on Wednesday to lose as much as 5% after U.S. government data showed an unexpected build up in inventories.

The relief that the Fed had finally delivered pushed MSCI’s main emerging market stocks index up 1% and almost 4% higher since the start of the week.

It is still down almost 17% for the year.

The prospect of higher Fed rates is seen as a negative for emerging markets because one of their main appeals is that they pay relatively higher interest rates than assets in developed economies such as the United States.

“Our stance remains for a stronger dollar/Asia FX outlook, with further depreciation in the yuan adding another layer of pressure,” analysts for Barclays said in a note.

Plenty of country-specific issues were bubbling as well.

The premium investors charge to buy Brazil’s sovereign bonds over U.S. Treasuries continued to rise after Fitch cut Brazil’s credit rating to junk, the second ratings agency to do so this year. The real and dollar-denominated bonds tumbled.

JP Morgan said ratings-induced selling of Brazil’s bonds could amount to $6.2 billion, although much of it has probably already happened.

Mexico was waiting to see whether its central bank would follow the Fed by raising interest rates later, while there was also intense focus on how far Argentina’s peso would fall as it begins a new life as a floating currency. Traders reckon it could decline between 20 and 30%.