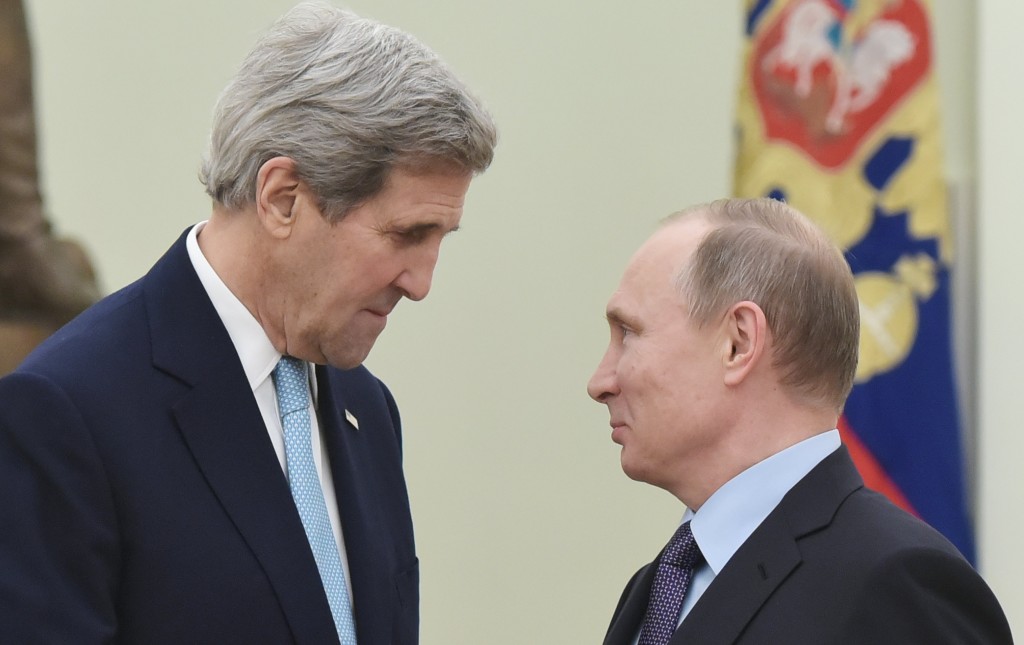 U.S. Secretary of State John Kerry on Tuesday accepted Russia’s long-standing demand that President Bashar Assad’s future be determined by his own people, as Washington and Moscow edged toward putting aside years of disagreement over how to end Syria’s civil war.

“The United States and our partners are not seeking so-called regime change,” Kerry told reporters in the Russian capital after meeting President Vladimir Putin. A major international conference on Syria would take place later this week in New York, Kerry announced.

Kerry reiterated the U.S. position that Assad, accused by the West of massive human-rights violations and chemical-weapons attacks, won’t be able to steer Syria out of 4 ½ years of conflict.

But after a day of discussions with Assad’s key international backer, Kerry said the focus now is “not on our differences about what can or cannot be done immediately about Assad.” Rather, it is on facilitating a peace process in which “Syrians will be making decisions for the future of Syria.”

Kerry’s declarations crystallized the evolution in U.S. policy on Assad over the last several months, as the Islamic State terror group’s growing influence in the Middle East has taken priority.

President Barack Obama first called on Assad to leave power in the summer of 2011, with “Assad must go” being a consistent rallying cry. Later, American officials allowed that he wouldn’t have to resign on “Day One” of a transition. Now, Assad’s stay could be indefinite.

Russia, by contrast, has remained consistent in its view that no foreign government could demand Assad’s departure and that Syrians would have to negotiate matters of leadership among themselves. Since late September, it has been bombing terrorist and rebel targets in Syria as part of what the West says is an effort to prop up Assad’s government.

Kerry said, “No one should be forced to choose between a dictator and being plagued by terrorists.” However, he described the Syrian opposition’s demand that Assad must leave as soon as peace talks begin as a “nonstarting position, obviously.”

Earlier Tuesday in the Kremlin, Putin noted several “outstanding issues” between Russia and its former Cold War foe. Beyond Assad, these include which rebel groups in Syria should be allowed to participate in the transition process and which should be deemed terrorists, and like the Islamic State group and al-Qaida, be combated by all.

Jordan is working on finalizing the list of terrorist versus legitimate opposition forces. Representatives of Syria’s opposition themselves hope this week to finalize their negotiating team for talks with Assad’s government. The U.S., Russia and others hope those talks will begin early next year.

Appearing beside Kerry, Russian Foreign Minister Sergey Lavrov hailed what he described as a “big negotiating day,” saying that the sides advanced efforts to define what a Syrian transition process might look like.

The two countries also have split on Ukraine since Russia’s annexation of the Crimea region last year and its ongoing, though diminished, support for separatist rebels in the east of the country. The U.S. has pressed severe economic sanctions against Russia in response and has insisted that Moscow’s actions have left it isolated.

But Kerry sang a different tune on Tuesday.

“We don’t seek to isolate Russia as a matter of policy, no,” Kerry said. The sooner Russia implements a February cease-fire that calls for withdrawal of Russian forces and materiel and a release of all prisoners, he said, the sooner that “sanctions can be rolled back.”

The world is better off when Russia and the U.S. work together, he added, calling Obama and Putin’s current cooperation a “sign of maturity.”

“There is no policy of the United States, per se, to isolate Russia,” Kerry stressed.