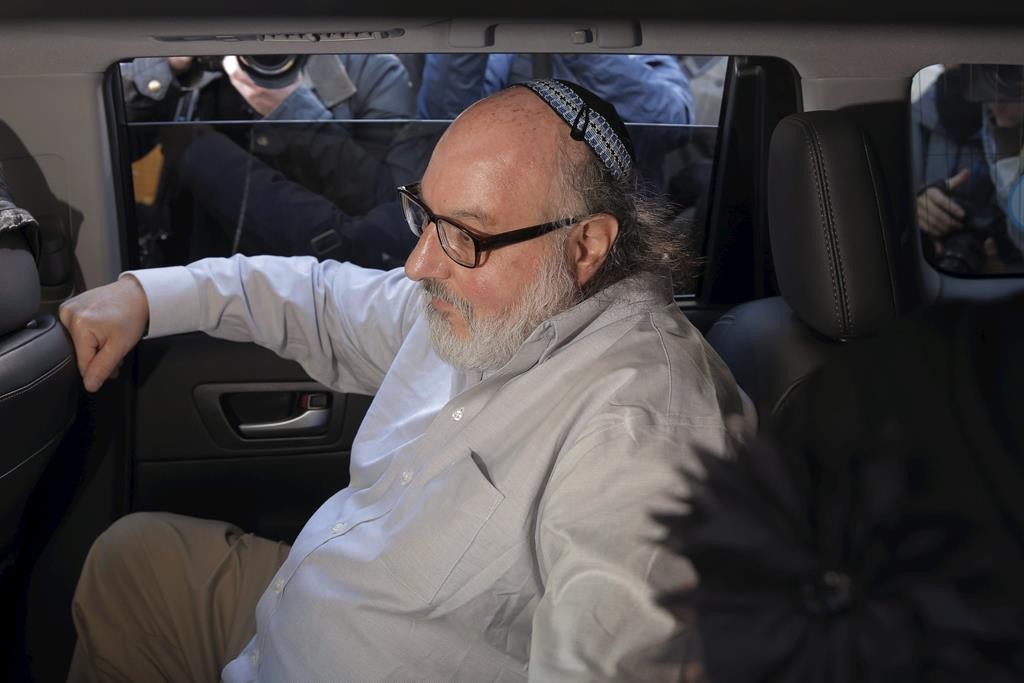 After serving an unprecedented 30 years in prison for passing classified information to an ally, Israel, Jonathan Pollard was released on Parole early Friday and spent Shabbos in the company of his wife —who has selflessly dedicated her life to lead the battle for his release — in the New York area.

Pollard checked in at a federal probation office in New York City on Friday morning, hours after being released from the medium -security federal correctional institute in Butner, North Carolina. He was accompanied by his wife, Esther, and Rabbi Pesach Lerner, who has ceaselessly championed Pollard’s cause for more than two decades. There he was met by his extraordinarily devoted pro-bono attorneys, Jacques Semmelman and Eliot Lauer.

During a visit with the Pollards on Sunday afternoon, Rabbi Lerner asked Jonathan about his first Shabbos out of prison.

“He described to me how, only 10 minutes before Shabbos, the Federal Parole Commission agents were fitting him with an electronic GPS bracelet that he has to wear 24 hours a day 7 days a week. This made him feel embarrassed and humiliated,” Rabbi Lerner told Hamodia.

Shortly after his release, Pollard’s attorneys filed a court challenge to terms of his parole that they called “onerous and oppressive,” and “unnecessary, unreasonable, contrived and unlawful.”

The court filing asked the United States District Court for the Southern District of New York to vacate the conditions that include a requirement that Mr. Pollard wear an electronic bracelet at all times for GPS tracking of his whereabouts, as well as the unfettered monitoring and inspection of Mr. Pollard’s computers as well as those of any employer who chooses to hire him.

According to the Parole Commission, the putative justification for these conditions is to ensure that Mr. Pollard does not commit any further crimes, specifically the disclosure of classified information.

“The notion that, having fought for and finally obtained his release after serving 30 years in prison, Mr. Pollard will now disclose stale, 30-year old information to anyone is preposterous,” his attorneys said in a statement on Friday. “Apart from the fact that the information is useless, disclosing it will result in Mr. Pollard’s swift return to prison to serve out his life sentence.”

Attached to the legal complaint is a declaration from Robert “Bud” McFarlane, who served as U.S. National Security Advisor under President Ronald Reagan, and who was in office at the time of Mr. Pollard’s arrest in 1985.

The lawyers also pointed out that the Parole Commission has already determined that there is no reasonable probability that Mr. Pollard will engage in further criminal activity.

“It is improper and disingenuous for the Parole Commission to impose these onerous conditions using the excuse of preventing further criminal activity,” they said.

“Even more disturbingly, the conditions are illegal, as they violate a federal statute, federal regulations and the Constitution, all of which strictly constrain the imposition of conditions on parolees,” the attorneys stressed.

The monitoring and tracking conditions imposed on Mr. Pollard are most commonly imposed on dangerous felons who must be closely supervised at all times for the protection of their victims.

“There is no basis whatsoever to treat Mr. Pollard in that manner, and doing so is vindictive and cruel, as well as unlawful,” Lauer and Semmelman added.

Pollard pled guilty to a single count of passing classified information to an ally as part of a plea deal that was supposed to ensure that he wouldn’t be sentenced to life in prison. But after then-Defense Secretary Caspar Weinberger who, according to his deputy at the time, was acting out of an “almost visceral dislike of Israel,” submitted a classified memorandum to the sentencing judge, Pollard was sentenced to life behind bars. He is the only individual in American history to receive such a punishment for such a crime; the median punishment for this crime is between two and four years in prison.

In a statement, Agudath Israel of America welcomed the news.

“His release is long overdue,” the organization said. “He is no longer the young man he was when he entered prison 30 years ago. We implore Attorney General Lynch to establish terms of release that will enable Mr. Pollard to live in peace and security and be a productive member of society, which can best be accomplished by granting his request to move to Israel.”