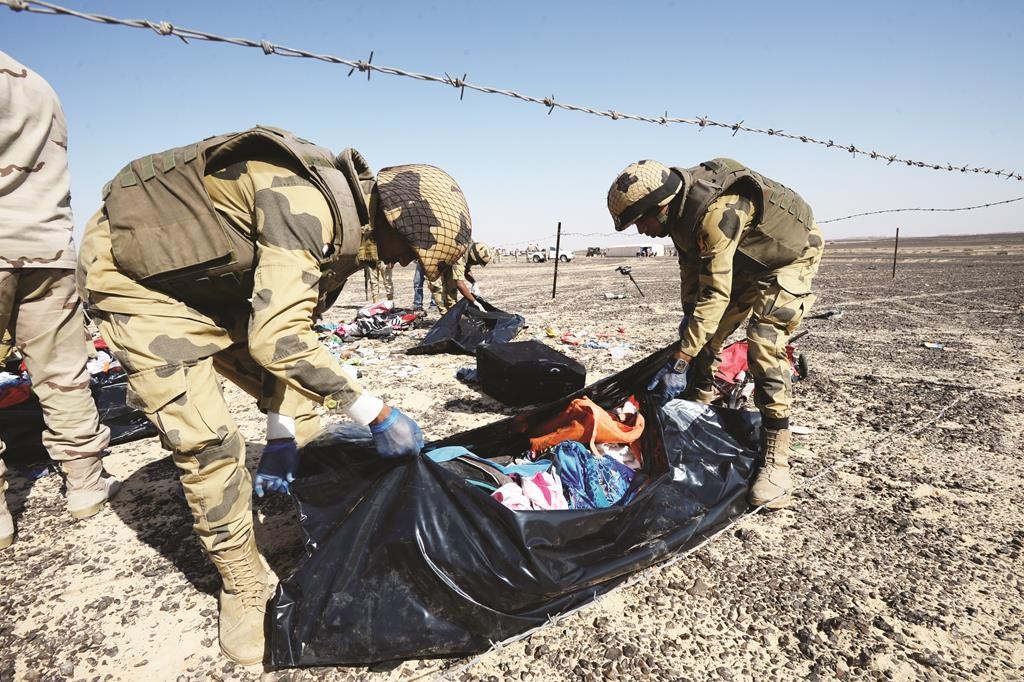 The Oct. 31 crash of a Russian passenger jet that killed all 224 on board was caused by a homemade bomb apparently smuggled onto the aircraft at Egypt’s Sharm-el-Sheik resort, Russian security officials said Tuesday.

Russian President Vladimir Putin vowed to track down and punish those behind the disaster “wherever they are on the planet.”

The Federal Security Service, or FSB, the successor agency to the Soviet KGB, announced a $50 million bounty for identification and capture of those responsible for the disaster.

“According to our experts, a homemade explosive device equivalent to 1 kilogram of TNT went off on board, which caused the plane to break up in the air,” FSB chief Alexander Bortnikov told Kremlin officials in confirming that the plane was destroyed by “a terrorist act.”

Bortnikov delivered the findings of Russia’s investigation into the disaster over Egypt’s Sinai Peninsula at a Kremlin meeting late Monday, after Russian President Vladimir Putin had returned from the Group of 20 summit in Turkey where the latest acts of terrorism in Paris were the focus of the world leaders’ deliberations.

“We will find them wherever they are on the planet and punish them,” Putin said of the plane bombers.

Russian investigators have concluded that the bomb was likely planted in a baggage hold before the Metrojet Airbus A321 took off from the Red Sea resort. It detonated 23 minutes after takeoff, blasting debris and bodies across a seven-square-mile area of the restive Egyptian peninsula.

“The murder of our nationals in Sinai is among the bloodiest crimes as to the number of casualties,” Putin said at the Kremlin meeting, parts of which were broadcast on state-run media on Tuesday. “We will not be wiping tears away from our souls and our hearts. This will stay with us forever.”

Bortnikov said traces of foreign-made explosives were found on aircraft wreckage and luggage collected from the debris field.

U.S. and British intelligence sources had speculated from the onset of the disaster that the plane carrying tourists home to St. Petersburg had been targeted by terrorists affiliated with the Islamic State terrorist group. Islamic State had claimed responsibility for the plane’s destruction through an allied militia in the Sinai, saying it was retaliation for Russian airstrikes against its forces in Syria.

Still, the Egyptian government maintained its position that investigations into the Metrojet disaster haven’t yet concluded or produced definitive evidence of its cause.

Egyptian Prime Minister Sherif Ismail said the Russian investigative team had shared its findings with Cairo officials but said only that they would “bear in mind” Moscow’s finding of terrorism without endorsing it while the probes continue.

Russian and Western media reported Tuesday that Egyptian security officials have detained at least 17 people in their investigation of the crash, including two employees of the Sharm-el-Sheik airport.

The Egyptian Interior Ministry, however, denied the reports of arrests at the airport and a focus on baggage handling operations by the ongoing investigations. In addition to Russian and Egyptian probes into the cause of the disaster, French forensic investigators are involved on behalf of the Airbus jet’s manufacturers. Ireland, which licensed the doomed plane, has also sent a team.

The ministry statement said that security measures are being stepped up at Sharm-El-Sheik and all the other airports in Egypt.

The Red Sea beach resorts in the Sinai city are a popular vacation destination for Russians, especially in winter. Most of the 217 passengers and seven flight crew members on board the chartered Metrojet were Russians from the St. Petersburg area.

Putin said during the Kremlin meeting that Russia would intensify its air campaign against Islamic State and urged “all of our partners” to join in the effort to track down and punish the perpetrators of one of the most devastating terrorist strikes against Russia.