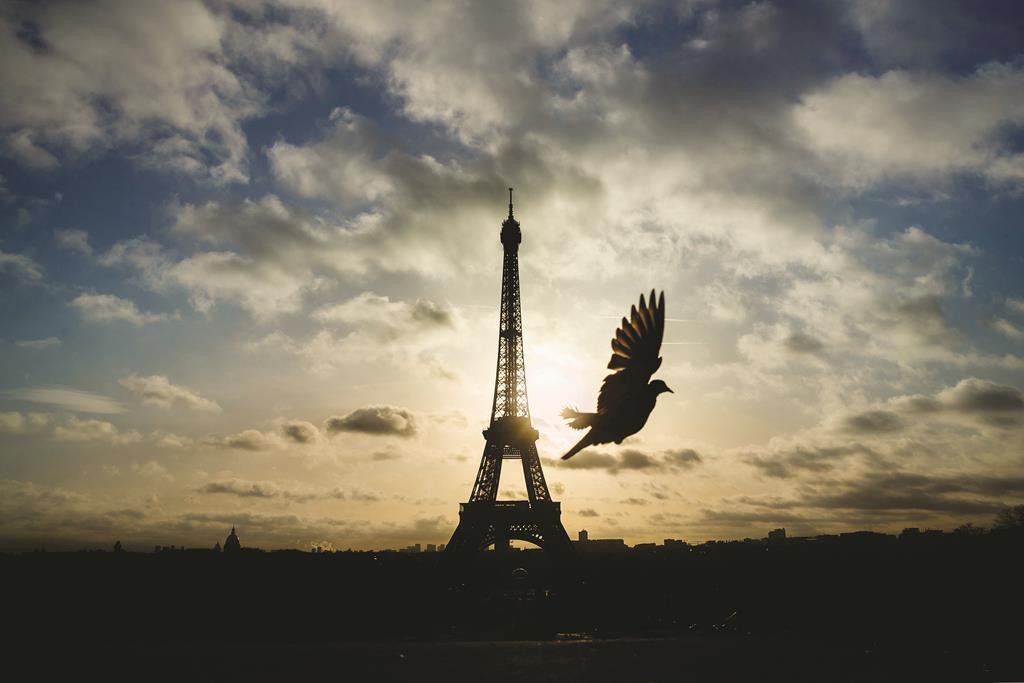 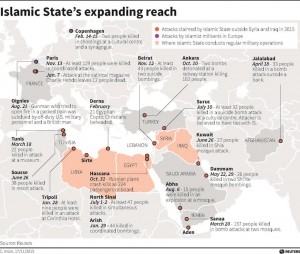 French warplanes pounded the Syrian headquarters of Islamic State for the second time this week Tuesday as France continued to step up its campaign against terrorism in the wake of last week’s terrorist attacks on this storied city.

The French Defense Ministry said 10 aircraft took off from bases in Jordan and the Persian Gulf and dropped 16 bombs, destroying an Islamic State command center and a training camp in Syria.

It was the second consecutive night of airstrikes on the terrorist group’s declared capital in Raqqa, in northern Syria, and came hours after French President Francois Hollande declared that his country was now “at war” with the radical group. He also asked lawmakers to extend France’s state of emergency and to give his office broader powers to counter imminent threats to national security.

There was also a second night of overnight raids on locations across France that authorities suspected of links to extremist activity, though not necessarily tied directly to the attacks on Paris last Friday, Interior Minister Bernard Cazeneuve said.

Cazeneuve told French radio that 128 locations were targeted, on top of 168 raids the night before.

He said the government was mobilizing 115,000 police, gendarmes and soldiers to protect the public. Thousands of troops have already been called in to help secure Paris.

Secretary of State John Kerry, visiting Paris in a show of solidarity with France, met with Hollande on Tuesday to discuss how to increase the pressure on Islamic State. Hollande will travel to Washington next week to hold talks with President Barack Obama.

Kerry described Islamic State’s strategy as “just raw terror” and said there was no choice but to fight the group with force.

“We’re not choosing to randomly go to war. We’re trying to avoid it, trying to find a better path,” Kerry said.

Seven terrorists blew themselves up or were killed by police in Friday’s attacks, three of them around the national stadium, three inside the Bataclan concert hall and one at a nearby cafe.

An intense manhunt is underway for suspect Salah Abdeslam, 26, who is believed to have been closely involved in the assault. One of his brothers, Brahim, has been named as one of the suicide bombers.

French authorities are also said to believe a second fugitive remains at large. An analysis of the attacks indicated that one other person directly involved was unaccounted for, The Associated Press reported Tuesday, citing unnamed officials. That person has not yet been identified, according to the AP.

Officials in France and Belgium, where many of the attackers either lived in or had connections to a Brussels neighborhood known to harbor radical Islamists, are said to be focusing their attention on a Belgian national named Abdelhamid Abaaoud as the potential mastermind of the assault.

On Tuesday, the Belgian federal prosecutor’s office charged two men, Mohammed Amri and Hamza Attou, who were arrested over the weekend, with being part of the plot.

Lawyers for the two suspects acknowledge that their clients drove to Paris to collect Salah Abdeslam and bring him to Brussels early Saturday. But they say the men deny any role in the attacks.

Amri’s lawyer, Xavier Carrette, said Abdeslam called his client Friday night asking for the ride, but made no mention of the attacks, the Belgian broadcaster RTBF reported. Attou went to keep Amri company, according to his attorney, Carine Couquelet.

Belgian media reported that ammonium nitrate, an ingredient often found in homemade explosives, was discovered at the men’s residences. But prosecutors said tests were still being conducted to determine the nature of the materials seized and cautioned against drawing any hasty conclusions.

The developments in the fast-moving investigation into the Paris attacks came as Russian security officials confirmed for the first time that a bomb brought down a Russian commercial airliner over Egypt last month, killing all 224 people on board.

Islamic State has claimed responsibility for that attack, as well as for the assault on Paris, sparking increasing alarm over the group’s apparent growing ambition, sophistication and reach in its terror campaign.

In other developments Tuesday:

• In a show of solidarity, British Prime Minister David Cameron was joining Prince William at a soccer match Tuesday night between England and France in London’s Wembley Stadium. Armed police were patrolling the site.

• Another Belgian car with a shattered front passenger window was found in northern Paris — the third vehicle police identified as having links to the attacks.

• The Eiffel Tower shut down again after opening for just a day Monday, and heavily armed troops patrolled the courtyard of the Louvre Museum.

• Germany’s top security official said a Syrian passport found with one of the Paris attackers may have been planted to make Europeans fearful of refugees. Interior Minister Thomas de Maiziere told reporters in Berlin it was “unusual that such a person was faithfully registered in Greece, Serbia and Croatia” amid the chaos of Europe’s immigration crisis. He said the multiple passport registrations could be “a trail that was intentionally laid.”

• German police arrested seven people near the western city of Aachen, but later released them, saying no links to the Paris attacks were found.