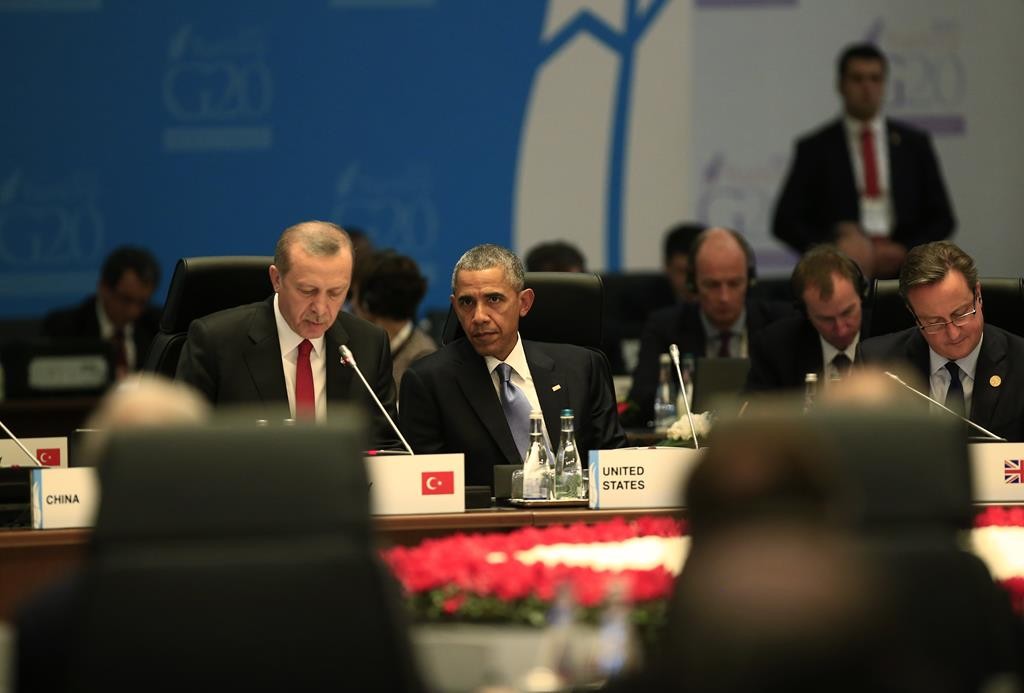 The Paris attacks are pressuring President Barack Obama to confront Islamic State with more aggressive military action than he has been willing to consider in the past, opening a difficult deliberation for a leader who has tried to build a legacy on ending America’s wars, not extending them.

On Sunday, Obama pledged to “redouble our efforts” to fight international terrorism after the bombings and shootings that killed 129 people in the French capital.

Obama mentioned fortifying borders and continuing diplomatic talks, but that strategy is likely to get tougher as world leaders gather in Turkey for the annual Group of 20 economic summit — an event now transformed by the attacks into an emergency-planning meeting on Islamic State.

After a meeting with Turkish President Recep Tayyip Erdogan this morning, Obama condemned the killings as “an attack on the civilized world” and pledged to “stand in solidarity” with French authorities as they hunt for the perpetrators.

The U.S. and its anti-Islamic State coalition will double down on efforts “to bring about a peaceful transition in Syria and to eliminate Daesh as a force that can create so much pain and suffering for people in Paris, in Ankara and in other parts of the globe,” he said, using an alternate name for Islamic State.

The attacks in Paris provoked a new anxiety among European and Middle Eastern leaders, reflecting what appears to be growing ambition on the part of Islamic State to extend its reach beyond Iraq and Syria, and target enemies on an international level.

The Paris attacks came soon after the bombing of a Shiite district of Beirut and the sudden crash of a Russian airliner. Islamic State has claimed responsibility for all three events, which targeted elements that have been fighting Islamic State on what it views as its home turf.

World leaders are now looking again to the U.S. for leadership in the campaign to defeat the terrorist group. Erdogan is just one regional partner who wants the U.S. to send in more ground troops and special operations forces to help coordinate air strikes.

Others are pushing for a no-fly zone to stop air operations by the government of Syrian President Bashar Assad. Supporters of a no-fly zone say it would demonstrate that the West remains committed to defeating the Syrian dictator, undercutting a powerful Islamic State recruiting narrative.

Obama has been resistant to sinking more deeply into the Syrian civil war, but there are signs that could be changing.

Defense Secretary Ashton Carter promised his French counterpart that the U.S. would take “additional steps” to respond to the attacks.

It was unclear what Carter meant.

On Monday, Obama  he is scheduled to meet with European allies for a previously scheduled meeting to talk about fighting Islamic State, and dealing with Russian President Vladimir Putin’s moves into Syria and Ukraine.