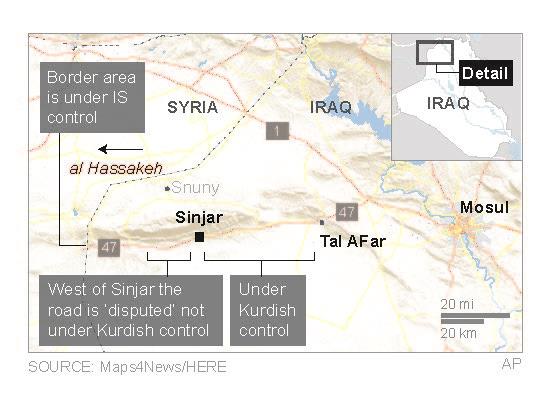 Supported by U.S.-led airstrikes, Kurdish Iraqi troops on Thursday seized part of a highway that is used as a vital supply line for the Islamic State terror group, a key initial step in a major offensive to retake the strategic town of Sinjar from IS.

The town was overrun by the terrorists as they rampaged across Iraq in August 2014, leading to the killing, enslavement and flight of thousands of people from the minority Yazidi community. The U.S. later launched an air campaign against IS, also known as ISIL, ISIS and, in Arabic, Daesh.

Hours into Thursday’s operation, the Kurdish Regional Security Council said its forces controlled a section of Highway 47, which passes by Sinjar and indirectly links the terrorists’ two biggest strongholds – Raqqa in Syria and Mosul in northern Iraq – as a route for goods, weapons and fighters.

Coalition-backed Kurdish fighters on both sides of the border are trying to retake sections of that corridor as part of Operation Free Sinjar.

“By controlling Highway 47, which is used by Daesh to transport weapons, fighters, illicit oil, and other commodities that fund their operations, the coalition intends to increase pressure … and isolate their components from each other,” a coalition statement said.

The Kurdish fighters also said they had secured the villages of Gabarra, on the western front, and Tel Shore, Fadhelya and Qen on the eastern front.

About 7,500 peshmerga fighters closed in on Sinjar from three sides, the security council said. In addition to taking the town and the highway, the operation aimed to establish “a significant buffer zone to protect the city and its inhabitants from incoming artillery.”