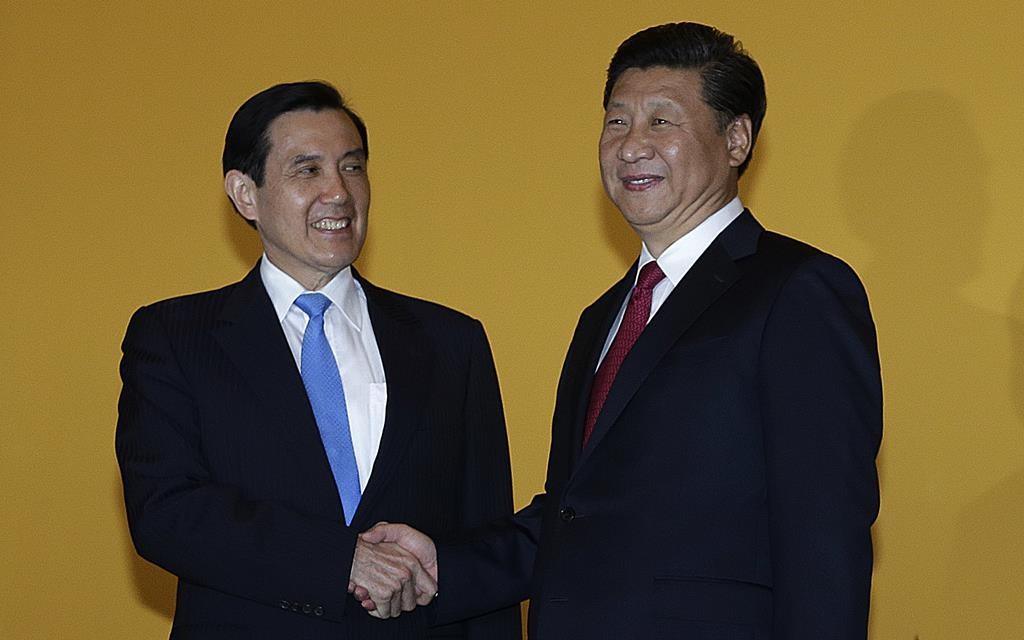 The leaders of China and Taiwan met Saturday for the first time since the formerly bitter Cold War foes split amid civil war 66 years ago, and though no concrete agreement resulted, both hailed the meeting as a sign of a new stability in relations.

Chinese President Xi Jinping and Taiwanese President Ma Ying-jeou came together on neutral ground in the Southeast Asian city-state of Singapore, walking toward each other in a hotel ballroom in front of a backdrop of yellow — a traditional color of Chinese emperors.

The two men smiled broadly as they shook hands for more than one minute, turning slightly to the side to accommodate a host of photojournalists in the ballroom. No national flags were present — a necessary work-around to overcome China’s refusal to recognize Taiwan’s sovereignty or its government’s formal legitimacy — and the two men were referred to merely as “Mr. Xi” and “Mr. Ma” to further reduce the chances of bruised sensitivities.

In brief opening remarks in front of reporters before going into a closed-door meeting, Xi said, “History will record this day.” He alluded to China’s long-cherished goals of unification with Taiwan, saying, “We are one family,” and “No force can pull us apart.”

Ma said, “Both sides should respect each other’s values and way of life,” while adding that relations between the sides were “the most peaceful and stable they have ever been.”

When they split in 1949, both sides aspired to absorb the other, with each claiming the mantle of the only legitimate government of all of China, Taiwan included. Communist Party-ruled China still demands that Taiwan eventually be unified with the mainland, by force if necessary, while many citizens of democratic Taiwan increasingly prefer to simply maintain the separate status the island has carved out over more than six decades.

Critics of Ma in Taiwan are wary that his meeting with Xi and similar contacts will pave the way for Beijing to assert greater control over the island, further deepening its international isolation.

However, Ma said at a post-meeting news conference that he discussed with Xi the Taiwanese people’s desire for greater participation in global society, particularly for nongovernmental organizations. China refuses to acknowledge the island as anything other than a breakaway province, and pressure from Beijing keeps Taiwan out of the United Nations and other major multinational organizations.

Ma said Xi told him that China would “appropriately handle” Taiwanese moves toward greater participation on a case-by-case basis.

Each leader hopes to seal his legacy as one who helped bring decades of division and mistrust to a mutually acceptable end. But the meeting was more about the symbolism of coming together than about substance. Both sides had said no agreements would be signed or joint statements issued.