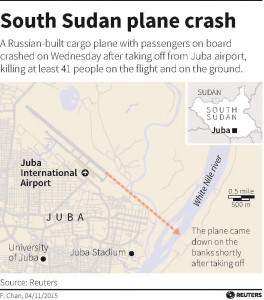 A cargo plane carrying an added load of unregistered people crashed Wednesday morning along the banks of the Nile River after taking off from South Sudan’s capital of Juba. The crash killed 36 people and left an infant clinging to life, South Sudan authorities said.

The Soviet-made Antonov plane, which had been bound for the Paloich oil fields in Upper Nile state, was registered in Tajikistan and belonged to Allied Services Limited, said Ateny Wek Ateny, a spokesman for South Sudanese President Salva Kiir.

Wreckage from the plane was scattered in a bushy area on banks of the Nile with a few homes nearby. Its tail and part of the fuselage remained attached but the plane’s wings, propellers and front were completely smashed.

The U.N. mission said it was sending personnel to help the search operation.

This article appeared in print on page 3 of the November 5th, 2015 edition of Hamodia.