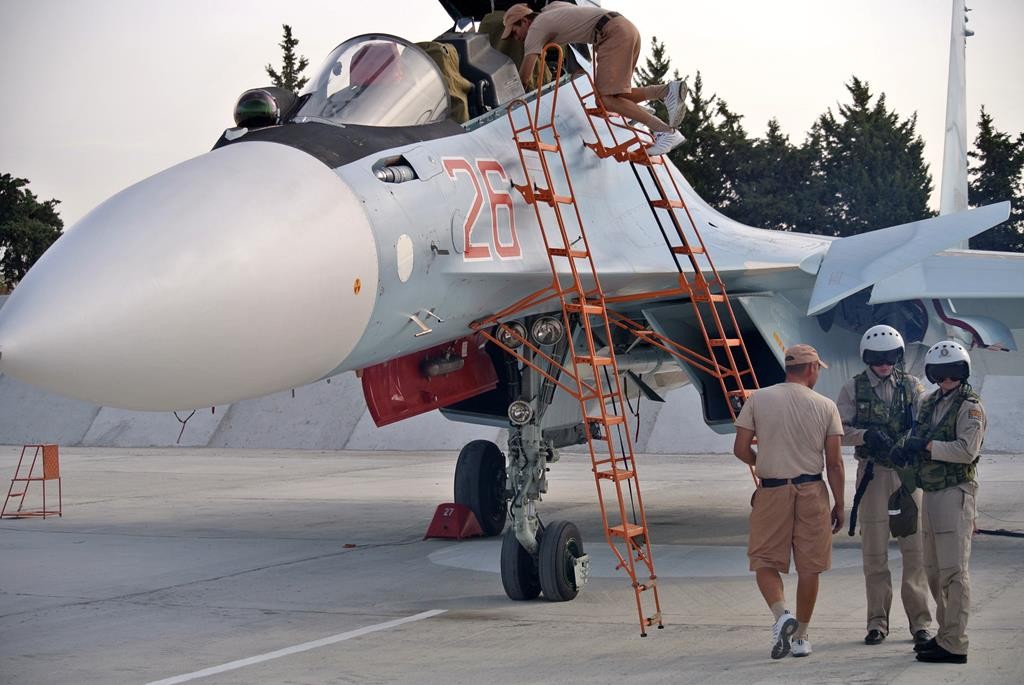 As Russia unleashed waves of warplanes Thursday from this air base in western Syria to pound targets, President Vladimir Putin pushed diplomatic efforts with the West, stressing the need “to consider each other as allies in a common fight.”

Russia put its military muscle on display, bringing Moscow-based reporters to view a day’s worth of fighter jets roaring off a runway in dozens of sorties as helicopter gunships patrolled the edges of the sprawling facility.

Russian Foreign Minister Sergey Lavrov and U.S. Secretary of State John Kerry will meet Friday in Vienna, joined by their counterparts from Saudi Arabia and Turkey, both staunch critics of President Bashar Assad.

Lavrov said he wanted to provide “firsthand information” about the Russian air campaign against Islamic State terrorists in Syria, but also talk about a future political process in the country that is now in its fifth year of civil war.

The U.S. and other Western powers have questioned Russia’s primary motive in the airstrikes that began Sept. 30 and have backed up a Syrian government offensive in central and northwestern regions. Moscow says it is fighting IS and other terrorist groups like the al-Qaida-linked Nusra Front, but Washington and others say the intervention is to prop up Assad and is likely to fan the violence.

The intervention is also allowing Russia to portray itself as a major global player, projecting its military power far from its borders.

Assad met Tuesday with Putin in a surprise visit to Moscow to discuss the military operations. In a speech Thursday at a conference in Russia’s southern resort of Sochi, Putin said Syria’s leaders “should establish working contacts with those opposition forces that are ready for dialogue.”

The Kremlin said Putin also talked on the phone with the leaders of Turkey, Saudi Arabia, Egypt and Jordan ahead of the Friday session.