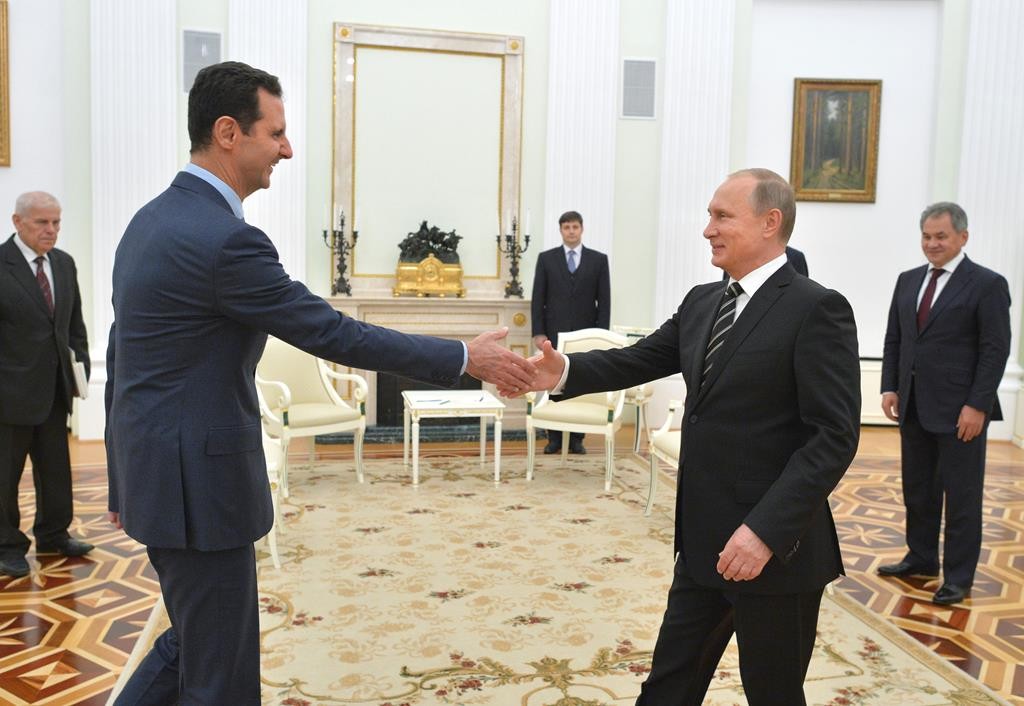 Vladimir Putin used a rare visit to Moscow by Syrian President Bashar al-Assad to talk up the Kremlin’s potential to help broker a political settlement to the crisis as he tried to show the West Russia has become a major player in the Middle East.

Assad flew to Moscow on Tuesday evening to thank Putin personally for his military support, in a surprise visit that Russian state media cast as a diplomatic coup.

It was Assad’s first foreign visit since the start of the Syrian crisis in 2011, and came three weeks after Russia launched a campaign of air strikes against Islamist terrorists and rebels in Syria that has bolstered Assad’s forces.

The Kremlin, which said it had invited Assad to visit Moscow, kept the visit quiet until Wednesday morning.

Putin told Assad he hoped progress on the military front would be followed by moves towards a political solution in Syria, bolstering Western hopes Moscow will use its increased influence to cajole Assad into talking to his opponents.

Moscow, which feels shut out by the West because of the Ukraine crisis, is keen to show its detractors it is pursuing military and diplomatic tracks simultaneously, and Putin spoke to several regional leaders after meeting Assad.

He talked by telephone to the kings of Saudi Arabia and Jordan, as well as the presidents of Egypt and Turkey to brief them on the details of Assad’s visit.

Assad’s confidence is likely to be boosted by his Moscow visit, which comes as his forces wage counter offensives in western Syria against insurgents backed by Assad’s foreign opponents, as well as Islamic State terrorists.

Russian state media made the meeting its top news item, showing Assad, dressed in a dark blue suit, talking to Putin, together with the Russian foreign and defense ministers.

The Kremlin has cast its intervention in Syria, its biggest in the Middle East since the 1991 Soviet collapse, as a common sense move designed to roll back international terrorism in the face of what it says is ineffective action from Washington.

It has been trying to get the United States to embark on a serious dialogue with Moscow over Syria. So far, it has only succeeded in clinching a technical deal with Washington about the safety of both countries’ air forces in Syria.