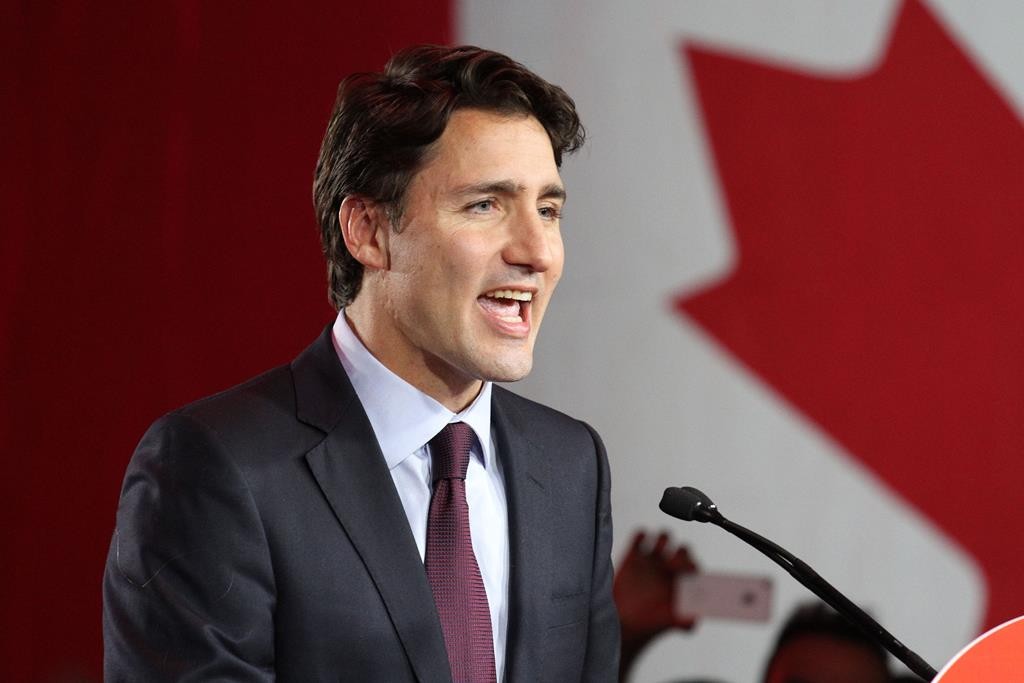 As a young man, Justin Trudeau continually sought respite from his father’s long shadow. He debated in university as Jason Tremblay, boxed as Justin St. Clair and eventually settled on Canada’s west coast — as far in Canada as he could get from being Pierre Trudeau’s eldest and still be close to great skiing.

Now 43, he has come full circle, reviving a moribund Liberal Party to a solid majority amid a new wave of the Trudeaumania that swept his father to power in 1968. In ousting Stephen Harper on Monday, he becomes the country’s first inter-generational prime minister and gets to move back into his childhood home.

Trudeau campaigned on a brand of optimism, transparency and youthful energy, while promising government activism to stimulate a weak economy and address middle-class anxiety over income inequality and retirement security.

In contrast to the departing Harper, he will run deficits willingly, reduce Canada’s combat role against the Islamic State and get behind the Iran nuclear deal. He’ll also rule out the purchase of F-35 fighters in favor of more spending on the navy and join President Barrack Obama in Paris in pushing for aggressive action on climate change.

He is, in many ways, the happy faced anti-Harper.

Trudeau’s political role model is not so much his beloved “papa,” whose public persona over 15 years as prime minister mixed charisma and aloofness, but his maternal grandfather, Jimmy Sinclair, a consummate glad-handing Scottish immigrant to Canada and Rhodes scholar. It was no accident that Trudeau held his final campaign event Sunday night in the Vancouver constituency his grandfather represented from 1940 to 1958.

“I’m not sure if love of campaigning has any kind of genetic component, but if it does, I can trace my passion for it straight back to Grandpa,” he told an enthusiastic crowd on what was the birthday of both his father and his eldest son, 8-year-old Xavier James, named for Sinclair. “He loved knocking on doors, getting out, meeting with people, taking the time to really listen to what they had to say. It’s his style that I’ve adopted as my own.”

In ending nearly 10 years under Harper, Trudeau demonstrated a surprising ease with retail politics in his first national campaign. His policies contain the social-justice and individual-rights hallmarks of his father’s brand as well as a repudiation of the elder Trudeau’s centralizing tendencies on everything from energy policy to the power of the prime minister’s office.

His father famously asked “who will speak for Canada” in denigrating the increased role of the provinces, while the younger Trudeau plans to take a delegation of premiers to the Paris climate summit.

“Justin grew up in a totally different society, so much more secular, so very different from the society Trudeau grew up in,” said historian John English, a Pierre Trudeau biographer and former Liberal MP.

Yet English also sees striking similarities between them on issues such as inequality. “They don’t look alike and they don’t sound alike either,” he said. “But having said that, he is very much in the tradition — his view of the place of state in society.”

His career path was a restless one, in which he studied several subjects, traveled the globe as a young man and variously taught mathematics, French, drama, creative writing and snowboarding in British Columbia.

Then suddenly in 2000, he was thrust back on the national stage after delivering a stirring eulogy at his father’s state funeral. In the days after, two things happened: Trudeau was asked to run, and declined, while Harper, who had been drawn to politics by his distaste for the elder Trudeau, wrote a deeply critical newspaper essay. The battle lines were beginning to form.

Trudeau didn’t make his move into politics until 2007, then married, when he won a nomination in a poor Montreal district held by the separatist Bloc Quebecois. Nobody threw out the welcome mat for him; the nomination was contested within his own party. He won the seat in 2008 even as his party went down to defeat and then was re-elected in 2011 as the Liberals went down to their worst defeat in history.

The party was hobbled, in the words of one observer, by a “lazy approach to grassroots voters, its neglect of youth and ethnic voters and its general sense of hubris and entitlement.” That was Trudeau himself, who then sought the leadership and won it handily in 2013, with a mission to ward off the inner squabbling and take on the Harper Conservatives.

He quickly overtook Harper in popularity, baffling the Conservatives who considered him a lightweight. But by the time the 2015 election began 11 weeks ago, a series of gaffes and a barrage of attack ads saying he was “just not ready” had relegated the Liberals to third place and raised doubts he lacked aptitude for the family business.

Then his inner Jimmy Sinclair kicked in. On the days of three key debates, he put his youthful contrast on display by twice inviting reporters to watch him spar and once capture him canoeing down the Bow River in Calgary.

He was pugnacious in the debates, too, surprising voters whose expectations had been lowered by the Conservative ads and NDP Leader Tom Mulcair’s one-time boast he would “wipe the floor” with the inexperienced upstart.

In one of the debates, Mulcair took a left cross to the head after attacking the elder Trudeau’s record on civil liberties — on the anniversary of his death, no less. “I am incredibly proud to be Pierre Elliott Trudeau’s son, and I am incredibly lucky to have been raised with his values,” Trudeau responded calmly yet firmly, a clip that was among the most widely shared of the campaign.

English, the historian, sees major generational change in the air, likening it to the Kennedy and Obama presidencies and the elder Trudeau’s first victory. He sees his strengths differing from those of his father, but suited for the times. “He’s not an intellectual, OK, but he is well read and he does have a first-rate temperament. He has the temperament for politics. He’s positive, he’s gregarious and he’s got that sense that in a hard time, we’ll come out of it,” English said.

In his acceptance speech Monday night, Trudeau drew on experience in delivering a message to his young children, all of them sleeping at the time. “My dear kids, we are entering into a new adventure together,” he said. “And I can tell you now, there will be some tough times for you as children of a prime minister, but Daddy will be there for you.”