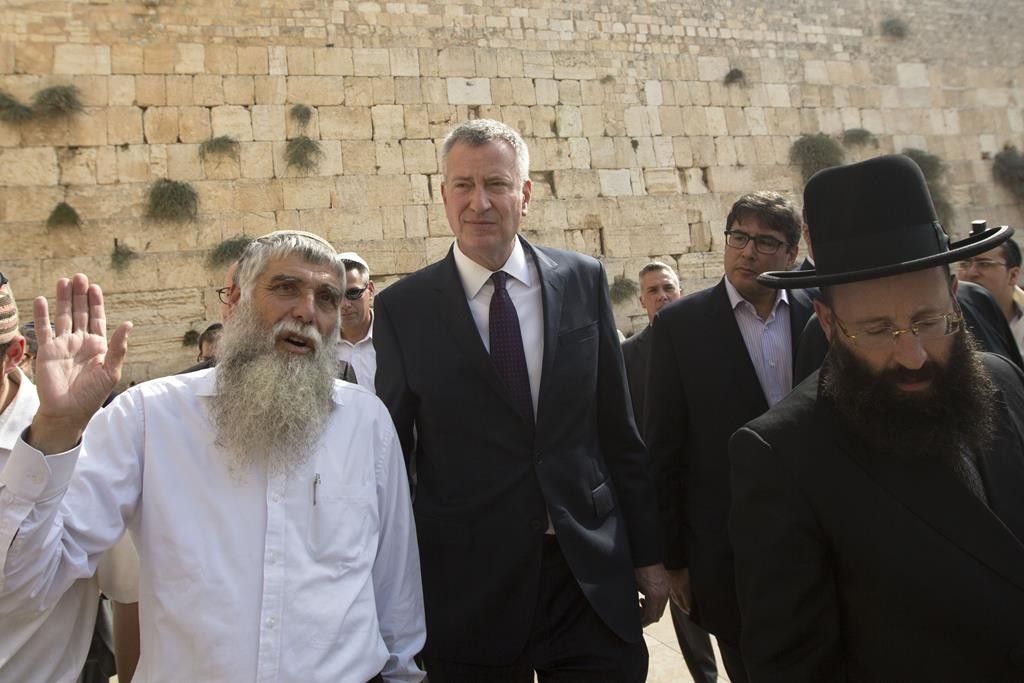 Making his first visit to Israel as New York City mayor, Bill de Blasio garnered praise for coming despite the situation as he visited the Kosel and Jewish victims of terror and addressed an international mayors’ conference on anti-Semitism.

De Blasio, a former city councilman who represented parts of heavily Jewish Boro Park, had been to the country three times previously. On the second day of his current three-day visit, on Motzoei Shabbos, he and Yerushalayim Mayor Nir Barkat visited victims of the recent wave of terror who are hospitalized at Hadassah Ein Kerem Hospital.

“Our hearts are with you. When you are attacked, we feel as though we have been attacked,” de Blasio declared as he went from bed to bed shaking hands, speaking to the patients and wishing them a speedy recovery.

The guest was accompanied by Professor Tamar Peretz, the deputy director of Hadassah Hospital. The mayor spoke at length with Pesach Krishevsky, one of those who was seriously wounded in the Geulah attack. He has undergone two surgeries to treat his wounds.

“I wish I could express in words the remarkable stories I heard today from the victims, each one of which has a positive spirit despite what they have been through,” de Blasio said. “What we saw in the spirit and strength of the victims and the leadership here in Yerushalayim and by the staff of Hadassah infuses us with hope, and our prayers are with the victims and their families. When the violence ends, there are good people here who will help us move forward.”

Barkat praised his Big Apple counterpart for the visit, which he said was “an expression of the true friendship and solidarity between the residents of New York and Yerushalayim.”

“The war on terror is global and is shared by many countries, and the September 11 attacks, like this wave of terror, are sourced in the same root of evil that we have to conquer. We have all experienced difficult times when terror has struck us and tried to disrupt our routine of life, but our residents are strong, determined and believe in the justness of their path and their hopes to live in peace, tranquility and coexistence.”

De Blasio responded that “Israel, and Jerusalem in particular, is the sixth borough of New York City. We feel a special closeness between the people, the blood and the history so that when you suffer, we also suffer and when you are attacked we also feel attacked.”

The mayor was expected to return to New York on Sunday night. A proposed visit to Ramallah to meet with Palestinian officials was scrapped due to security concerns. On Thursday, de Blasio said that given the current atmosphere, it would be “not appropriate” to meet Palestinian officials.

He also was at Yad Vashem on Sunday, where he called for an end to attacks by Palestinians against Israelis, and met Prime Minister Binyamin Netanyahu.

De Blasio was accompanied on his visit by a group of Jewish allies, including publicist Ari Noe, activist Leon Goldenberg and Michael Miller, who heads the Jewish Community Relations Council.