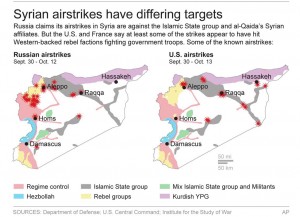 Hundreds of Iranian troops are being deployed in northern and central Syria, dramatically escalating Tehran’s involvement in the civil war as they join allied Hizbullah fighters in an ambitious offensive to wrest key areas from rebels amid Russian airstrikes.

Their arrival, a regional official and Syrian activists said Wednesday, highlights the far-reaching goals of Russia’s military involvement in Syria. It suggests that, for now, taking on Islamic State terrorists in eastern Syria seems a secondary priority to propping up President Bashar Assad.

The development is almost certain to increase pressure on Western-backed rebels, who are battling multiple foes, and push more civilians out of the areas of fighting, potentially creating a fresh wave of refugees.

Russia began its air campaign Sept. 30, and Syrian troops and allied militiamen launched a ground offensive against rebels in central Syria a week later. Russia says its airstrikes are meant to weaken the Islamic State group and other “terrorists” in Syria, but Western officials and Syrian rebels say most of the strikes have focused on central and northern Syria, where the group does not have a strong presence.

The official said the Iranian Revolutionary Guards began arriving about two weeks ago, after the Russian airstrikes began, and have accelerated recently. The Iranian-backed group Hizbullah has also sent a fresh wave of fighters to Syria, he told AP.

Iranian and Syrian officials have long acknowledged Iran has advisers and military experts in Syria, but denied there were ground troops. Wednesday’s statements were the first confirmation of Iranian fighters taking part in combat operations in Syria.

This article appeared in print on page 1 of the October 15th, 2015 edition of Hamodia.