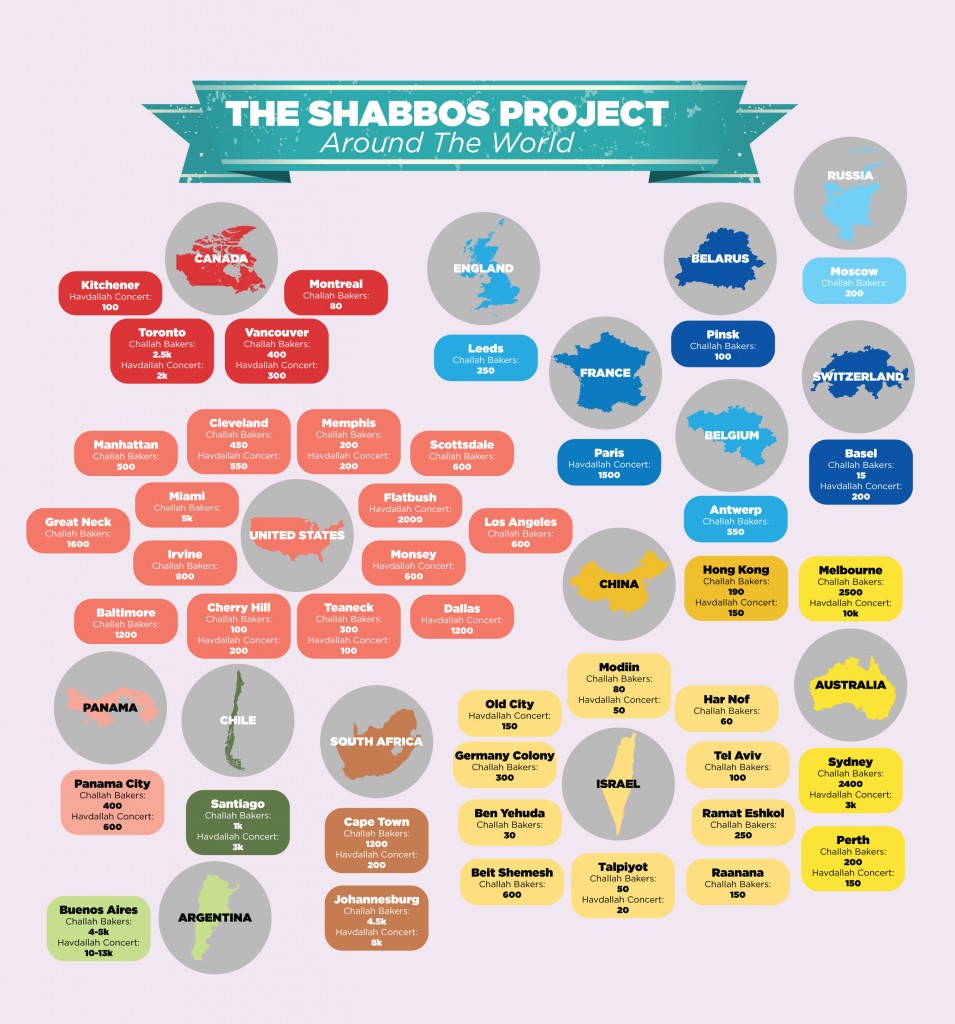 The Shabbos Project aims to bring awareness of Shabbos to Jews in more than 550 cities in 65 countries and across eight languages. Achieving this objective is crucial to our very future, because Shabbos is the foundation of who we are, where we have come from and where we are going. We can sometimes take Shabbos for granted. Let us pause for a moment and appreciate this remarkable gift from Hashem and what it means to us, by reflecting on three inspiring ideas which emerge from the mitzvah of Shabbos.

Harav Yitzchak Hutner, zt”l, explains the power of Shabbos from the perspective of the halachah of sheva brachos. The halachah requires that during the week of sheva brachos we only say the full seven blessings if we have panim chadashos, literally, “a new face,” meaning that there is someone present at the meal who did not attend the wedding. Because the blessings have already been said at the wedding, the only justification to repeat them is when there is someone new present to share in and add to the joy of the newlyweds. Interestingly, Shabbos is an exception to this rule; on Shabbos we do not need panim chadashos for the sheva brachos because Shabbos itself brings to the occasion the dimension of “a new face.” What “new face” does Shabbos bring to the occasion?

The human being, like the world, is a physical being. Yet we know that each person has a spiritual reality, and that is the neshamah. The neshamah is buried deep within a person, but we get a glimpse of it through the person’s facial glow. The neshamah shines from the face, and this is why when a person dies, the face becomes ashen. Anyone who has seen a dead body can tell you that the face of the departed turns pallid the moment the neshamah leaves the body. The glow of life is unique to human beings. Animals have a life force, but they don’t have a neshamah, reflected in the glow of the human face.

The Midrash comments that G-d sanctified Shabbos with maor panav shel adam — “the shining face of man.” On Shabbos, the world goes quiet because the everyday freneticism and physical creativity abate, thus allowing for a person’s true reality — the soul — to come to the fore. The body of the world is the physical world, which was created by G-d with “Asarah Maamaros” — 10 Statements; but the world’s “soul” is the Torah symbolized by the Aseres Hadibros — the Ten Commandments. Similarly, the body is the physical aspect of a person while the soul is the spiritual dimension which G-d has placed within each of us; on Shabbos, that shines through. A person becomes truly human on Shabbos. During the week, we are so busy, distracted by and caught up in the noise of the world, that the true essence of who we are, is often smothered. But on Shabbos, as we put aside the frantic activity of the week, the neshamah can shine. This is, Rav Hutner explains, why Shabbos is called panim chadashos — a “new face.” On Shabbos everyone becomes a new person, everyone has a “new face.” Indeed, it changes the world. It enables our true selves and the true reality of the world to shine forth in all its glory.

Certainly Shabbos brings with it physical rejuvenation through sleep and eating well, but more importantly, it brings, too, a deep and profound spiritual invigoration. This is why, as the Gemara teaches us, on Shabbos we get a neshamah yeseirah, an extra soul. The extra soul is a manifestation of the spiritual reality that comes to the fore on Shabbos. By reconnecting us with the true spiritual reality of ourselves and of the world, Shabbos uplifts us and renews our energy for the upcoming week, allowing us to emerge as new people, revived and ready to meet the challenges and opportunities of life.

A Day of Clarity

The Sfas Emes says that one of the central ideas of Shabbos is remembering. This is expressed in the fact that the mitzvah of Shabbos is introduced with the words “Zachor es yom haShabbos lekadsho — Remember the Shabbos day to make it holy.” From this, the Sfas Emes learns that Shabbos is a day of memory, specifically remembering the purpose for which we were sent into this world. When a soul is sent into the body for the purpose of serving Hashem in this world out of free choice, one of the great dangers is that a person may forget why he or she was sent here in the first place. But when the neshamah returns to Hashem after death, it is then confronted with the absolute clarity of what it had forgotten during its time in this world. It is only at that moment of death, with the separation of the soul from the body, that a person achieves such clarity.

That’s why, as the Sfas Emes explains, at the giving of the Torah the souls of the Jewish people left their bodies. The Sfas Emes says that it was because such a moment of absolute clarity can only be experienced in a soul that is not embedded in a body. This physical world is a barrier which hides the truth of our purpose and the clarity of mission of every person, and of the ultimate purpose for which G-d created the world. The Sfas Emes goes on to explain that that is why Shabbos is called “me’ein Olam Haba — a reflection of the essence of the next world.” This world is a world of materialism and forgetfulness and the next world is a world of clarity of purpose. This then is the “great kindness” that Hashem did in giving us Shabbos, explains the Sfas Emes. Shabbos is a day for remembering our purpose, with the clarity of the “next world.”

The Three Great Shabbosos of History

The Tur writes (Orach Chaim 292) that the three main Amidah prayers of Shabbos correspond to three great Shabbosos in history: the very first Shabbos of Creation, the Shabbos when the Torah was given and the time of the Final Redemption, which is called the Shabbos of history.

The Ramban explains, based on the teachings of the Talmud, that the six days of Creation parallel the 6,000 years of history, a day for each millennium. World history is 7,000 years long, paralleling the seven days of Creation. Just as the six days of Creation culminated in Shabbos, so, too, the 6,000 years of world history will culminate with the coming of Moshiach and the Final Shabbos of Redemption. The world’s history began with Shabbos, as it was the very first thing man experienced after he was created. The pivotal, historic event of the giving of the Torah was also on Shabbos; and the final destination of the world is also called Shabbos, when G-d will redeem this world from its moral confusion and pain. Shabbos is a time when we understand that to be a Jew is not merely about functioning, but about a holy mission; not merely about survival, but about carrying the light of this glorious and inspiring mission.

On the Shabbos of The Shabbos Project, let us all re-inspire ourselves with the power and beauty of Shabbos, and let us share it with as many of our fellow Jews as possible.

Warren Goldstein is the Chief Rabbi of South Africa and founder of The Shabbos Project, which is happening on October 23–24, Parashas Lech Lecha, in Jewish communities and homes in more than 550 cities in 65 countries. To get involved, call (718) 509-9280, or theshabbosproject.org.