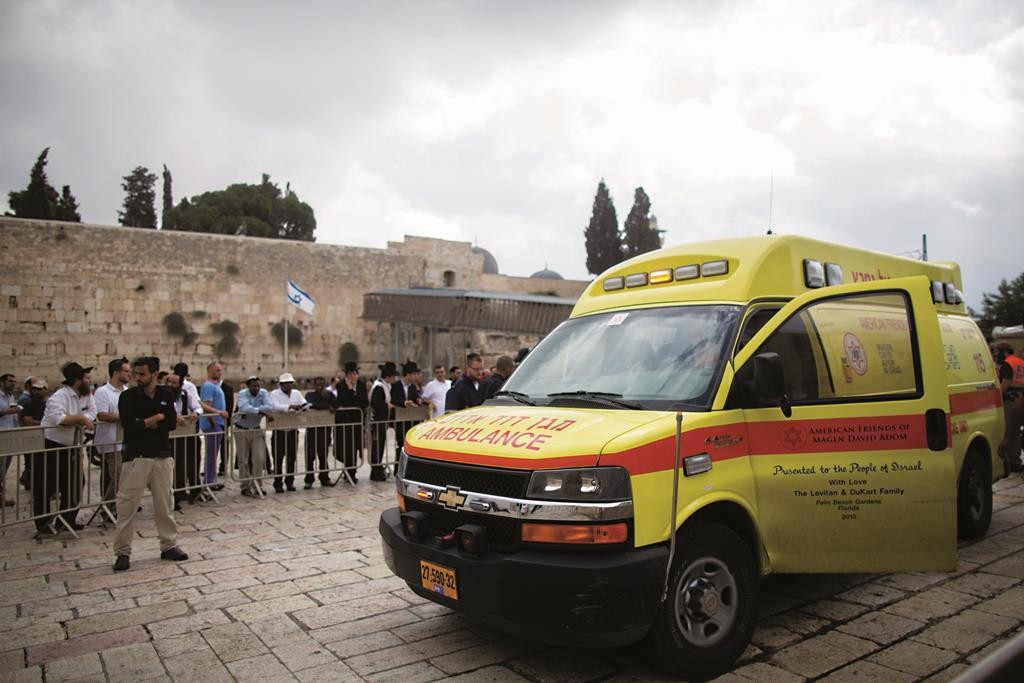 Three separate stabbing attacks were carried out by Palestinian terrorists in Israel on Wednesday—in the Old City of Yerushalayim, Petach Tikvah and Kiryat Gat.

In the course of the day, thirteen Israeli civilians, soldiers and police were injured from knives, firebombs and rocks. B’chasdei Shamayim, no one was killed.

Palestinian sources reported two dead and as many as 200 injured.

It was a day on which the often-asked question of whether to label the ongoing violence an Intifada or not seemed increasingly a matter of semantics, as the whole country turned into a battleground. While much of the violence until now has been confined largely to Yerushalayim, particularly Har Habayis, and Yehuda and Shomron, on Wednesday it spread to cities in central and southern Israel.

Near the Kosel, an 18-year-old Palestinian woman stabbed an Israeli man, wounding him lightly. He then drew a gun and shot the woman, seriously wounding her, police said. Both were evacuated to a hospital. Police noted that the incident occurred after authorities lifted some of the tight security measures imposed in the capital.

The next attack came shortly after in the southern city of Kiryat Gat. An Arab stabbed an Israeli soldier and then grabbed his gun as the latter was getting off a bus. The assailant then ran into a nearby residential building, police spokeswoman Luba Samri said. There, police special forces caught up with him and shot him dead.

Hamas later confirmed that the attacker, Ahmed al-Jundi, from Yata, near Chevron, was a member of their group.

Kiryat Gat and the surrounding area has been relatively peaceful in recent months, though located only a short drive from the Palestinian Authority-controlled areas and the Hamas-ruled Gaza Strip.

The soldier sustained a minor knife wound to the head as he resisted the attacker, and he was transported to Barzilai Medical Center in Ashkelon for treatment.

A Kiryat Gat woman told reporters of the harrowing experience of being confronted with an armed terrorist in her own home. Liat Ohana recounted how she got up to close her front door when an Arab man with an assault rifle pushed his way in and began shouting at her in Arabic.

“Right away I understood this is a terrorist,” Ohana said.

However, since the rifle didn’t have a magazine, he went into her kitchen and grabbed a knife. When Ohana and her mother fled the apartment, he came after them with the knife. After an unsuccessful stabbing attempt, he retreated into the apartment.

Meanwhile, the two women escaped. “We just kept running. I looked death in the eye and thought I’m not going to make it out alive.” Ohana said in the interview.

Public Security Minister Gilad Erdan praised police for acting quickly to neutralize the terrorist in Kiryat Gat. “The force acted exactly as they were expected to. We will continue to aggressively fight terror and will hurt whoever tries to harm us.”

Later, on Wednesday evening, a terrorist stabbed a 25-year-old Israeli man in Petach Tikvah at the entrance to a shopping mall. The attacker was overpowered and apprehended. He was soon identified as a 25-year-old resident of Chevron with no criminal record.

The incident occurred on the city’s Jabotinsky Street. According to one witness, the terrorist reached the entrance of the mall, pulled a knife, and managed to stab one person before being overpowered by security guards, Ynet said.

Paramedics at the scene provided medical treatment to the injured man, who sustained stab wounds to the upper half of his body. He was subsequently taken to The Rabin Medical Center – Beilinson Campus in Petach Tikva for treatment and is currently in light condition.

“When we arrived, there was a big commotion on the side of the road, near a bus stop,” recalled MDA paramedic Itay Tillinger. “That’s where the 25-year-old was laying on the ground , fully conscious but suffering from stab wounds to the upper half of his body. We provided emergency medical treatment and quickly took him to the intensive care unit of the hospital.”

Almost at the same time, a 15-year-old Palestinian was arrested in the East Yerushalayim neighborhood of Abu Tor after trying to stab Israeli security personnel in the area. The officers seized him before he could do any damage, then took him in for questioning.

At mid-evening, a Palestinian vehicle tried to break through the A-Zaim security checkpoint near Maaleh Adumim near Yerushalayim in an attempt to run over security forces, the IDF reported.

Soldiers opened fire, wounding the attacker, and then apprehended him. The 30-year-old terrorist was taken to Shaare Zedek Medical Center in moderate condition.

Two Israelis were lightly injured in the incident, as well.

Earlier in the day, two Israeli motorists barely escaped with their lives from the hands of a Palestinian mob near the Arab village of Beit Sahour, near Beit Lechem.

Wednesday morning, a mob ambushed 38-year-old Ribi Lev-Ohayon, a resident of Tekoa. After her car was pelted with rocks, the attackers tried to pull her out of the car, but other Jewish motorists came to her rescue, one allegedly shooting and injuring an attacker, according to a report on Arutz Sheva.

She was taken to Shaarei Tzedek hospital in Yerushalayim in stable condition, having suffered bruises from rocks and kicks all over her body.

The incident took place on a route used by thousands of Jewish motorists every day.

Later, at the same site, Josh Hasten, a resident of Elazar in the Gush Etzion area, was nearly murdered by an Arab mob hurling cinder blocks.

As he passed Tekoa, about 1500 feet from the IDF checkpoint outside Har Homa, some 30 to 50 Palestinians rushed toward his car armed with cinder blocks and rocks.

Realizing that he was in a life-threatening situation, Hasten drew his handgun and fired a warning shot into the air, which turned the mob away.

In view of the security situation, the Yerushalayim municipality and a parents’ association  announced that high schools throughout the city will strike on Thursday to dramatize their demand for government funding for better security for schools until the end of the school day. School security is only funded until 1.30 PM.

Mayor Nir Barkat said: “As long as the government is shirking its responsibility for school security, we will not abandon our children.”