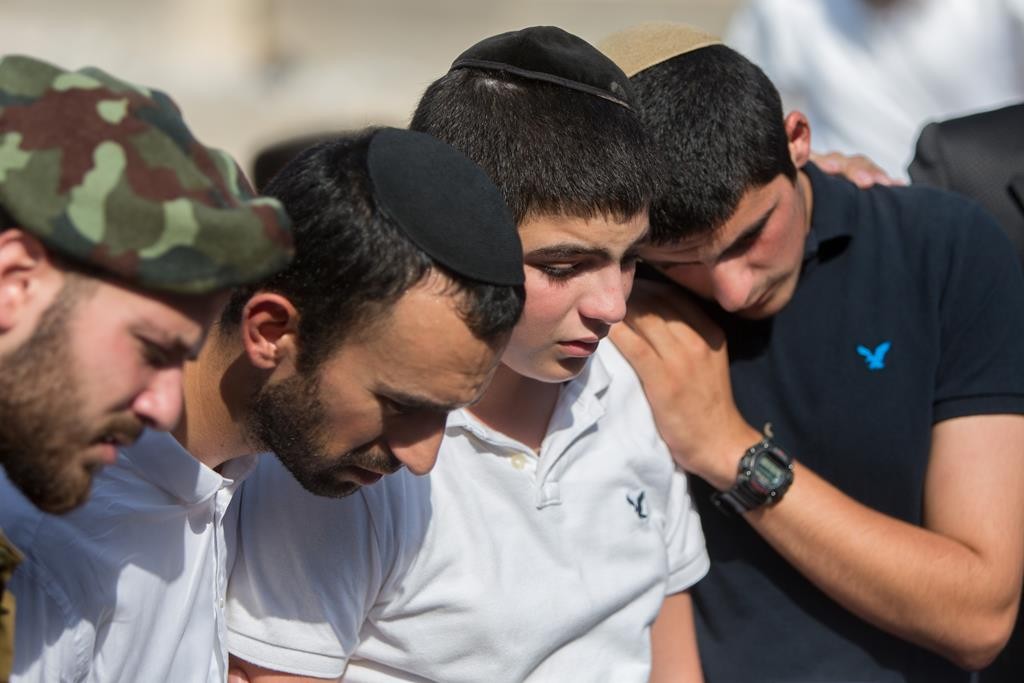 After a complex security and intelligence operation, Israeli security forces have caught the terror cell responsible for the brutal murders of Eitam and Naama Henkin, Hy”d, last Thursday night. It was cleared for publication Monday night (Motzoei Simchas Torah in Israel).

Last Thursday, two Palestinian terrorists fired multiple shots, killing Eitam and Naama Henkin, residents of Neria. Their four young children, including a 4 month old, were in the backseat of the car during the shooting but were unharmed.

The children of the Henkin family apparently were saved by the fact that one of the terrorists accidentally shot another in the hand.

Five Hamas terrorists, all of whom are from Shechem, were arrested, after a joint operation between the Shin Bet, the IDF, and Israel Police. Several other terrorists involved with the cell were also arrested.

The terrorists responsible have been named:

Raeb Ahmad Muhammad Alivi, 37, terror cell leader, recruited other terrorists, instructed them to implement attacks and provided them with weapons; Yahya Muhammad Nayif Abdallah Haj Hamed, 24, carried out the shooting in this attack and other attacks; Samir Zahir Ibrahim Kusa, 33, took part in three attacks as a driver; Karam Lutfi Fathi Razek, 23, fired during the attack with a pistol but was accidentally shot by another Hamas terrorist during the attack; and Zir Ziad Jamil Amar, 31, ensured that the roads were clear to carry out the attack.

After confirming via Amar that the roads were clear, Alivi, Hamed, Kusa, and Razek left Shechem in search of Israeli civilians to kill; they then saw the Henkin family car outside Beit Furik and began firing.

After stopping the car, two of the terrorists then exited and approached the driver’s side and passenger’s seat, shooting both occupants at close range.

Razek accidentally shot the hand of a fellow terrorist in the cell during the attack, causing him to drop his rifle at the scene; the rifle was found by IDF forces and used as part of the investigation.

The five then fled to Shechem.

The terror cell has also been involved in two shooting attacks which caused no casualties — an attack on an Israeli vehicle near the entrance to Kedumim in mid-August, and another, unnamed attack.

The Shin Bet has seized the weapon used to murder the Henkins — a short M-16 semiautomatic assault rifle with an advanced scope attached.

The weapon was found hidden in a store belonging to one of the arrested members of the terror cell in Shechem.

The investigation of the five-man terror cell is ongoing. A senior IDF officer has revealed that the cell members did not resist arrest in any way, exhibiting very unusual behavior for wanted terrorists.

“When we arrived to arrest them there was no opposition on their part and they didn’t hide in tunnels, mountains or hideout apartments. We found several of them in the apartments of their parents or aunt, and they were without weapons, and there was no resistance on their part,” revealed the source.

Two men were killed and three others wounded in a terrorist attack near the Lion’s Gate in Yerushalayim’s Old City on Motzoei Shabbos.

The attack began when a Palestinian man approached a Jewish family on their way to the Kosel and began stabbing them with a large knife. The attacker then snatched a pistol from one of his victims and began firing toward tourists.

Rabbi Nechemia Lavie, 41, and Aharon Banita-Bennett, 22, Hy”d, were named as the victims of the attack.

Bennett, along with his wife and 2-year-old son, were attacked by the terrorist; his wife was seriously wounded and the child lightly wounded.

Rabbi Lavie, a father of seven, has lived in the Old City for the past 23 years. He teaches at Yeshivat Ateret Kohanim.

According to reports, he went down with his gun to try and save those wounded by the terrorist in the attack, but the terrorist stabbed him and took his weapon.

The terrorist was shot and critically injured by security forces, and died of his wounds soon after.

A 15-year-old Jewish teenager was stabbed early Sunday morning, Hoshana Rabbah, at a gas station near Shaar Shechem in the Old City.

The teenager was stabbed in his upper body.

The terrorist was later shot by security forces.

Unrest continued Sunday afternoon, as a terrorist threw a firebomb at security forces at Kever Rochel. A Border Guard officer was injured in the attack.

Throughout the Yom Tov of Simchas Torah, security was beefed up all across Yerushalayim.

Some 1,500 police officers and security officials were on duty in the Old City and Arab neighborhoods of Yerushalayim — more than during Operation Protective Edge.

Fuller coverage of all the attacks over the last week will appear in tomorrow’s Weekly Edition.