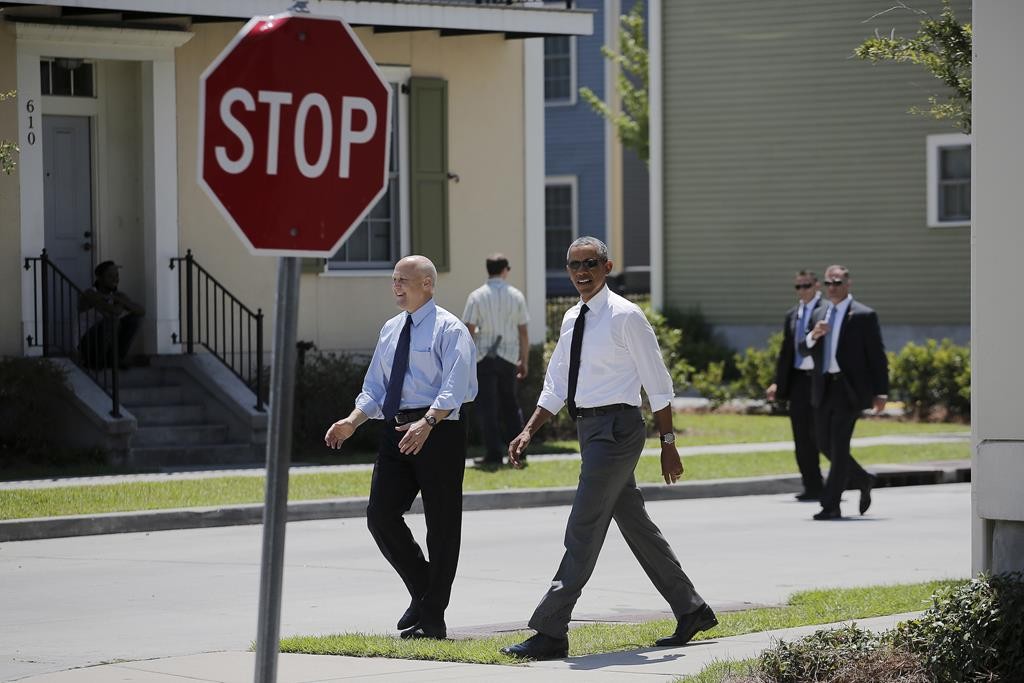 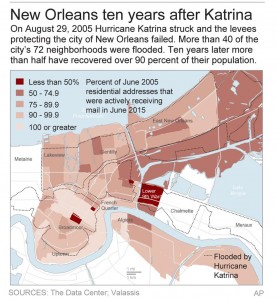 Visiting on tidy porch stoops and dining at a thriving corner eatery, President Obama paid tribute to New Orleans on Thursday as an extraordinary example of renewal and resilience 10 years after the devastation of Hurricane Katrina.

“The fact that we can make this many strides 10 years after a terrible, epic disaster, I think, is an indication of the kind of spirit we have in this city,” Obama declared after walking door to door in the historic Treme section of a city reborn from tragedy. He cautioned, though, that “just because the housing is nice doesn’t mean our job is done.”

Areas of the city still suffer from high poverty, he said, and young people still take the wrong path.

There is more to be done to confront “structural inequities that existed long before the storm happened,” he added.

In his remarks, Obama blended the same themes of resilience and renewal that he drew from encounters with the sturdy residents he met along Magic Street and at other locations.

Obama was a new U.S. senator when Katrina’s powerful winds and driving rain bore down on Louisiana on Aug. 29, 2005. The storm caused major damage to the Gulf Coast from Texas to central Florida while powering a storm surge that breached the system of levees meant to protect New Orleans from flooding.

Nearly 2,000 people died, most in New Orleans. Video of residents seeking refuge on rooftops, inside the Superdome and at the convention center dominated news coverage as Katrina came to symbolize government failure at every level.

In his central address, Obama said Katrina helped expose inequalities that long plagued New Orleans and left too many people, especially minorities, without good jobs, affordable health care or decent housing and too many kids growing up in the midst of violent crime and attending inefficient schools.

The setting of his address at the community center, where the water once stood 17 feet deep — spoke to the stark contrasts that remain. It sits near nicely renovated homes, but also next to a boarded-up wooden house. The area is filled with vacant lots where houses used to stand, so overgrown that local residents sometimes refer to it as the wilderness and worry about snakes hiding in the grass.