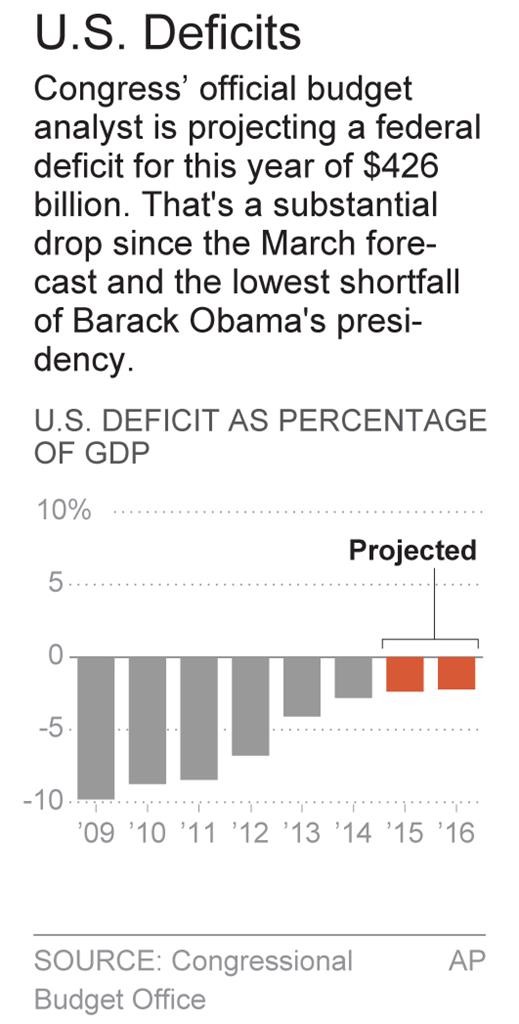 An unforeseen flood of revenue is shrinking federal deficits to the lowest level of President Barack Obama’s tenure, Congress’ nonpartisan budget adviser said Tuesday. But in a report that will fuel both parties in their autumn clash over spending, the analysts also warned that perilously high shortfalls will roar back unless lawmakers act.

Two weeks before Congress returns from recess, the Congressional Budget Office said it expects this year’s federal deficit to fall to $426 billion. That’s $60 billion less than it expected in March, thanks to greater-than-expected individual and corporate income tax collections, and less than a third of the record $1.4 trillion gap of 2009 as the government tried fighting off the Great Recession.

White House spokesman Eric Schultz said Congress should prevent cuts in agency budgets and fund highways and other projects, saying, “We need to stay focused on this route and avoid self-inflicted wounds” like a government shutdown.

Annual deficits should fall to $414 billion next year before an aging population and swelling health care costs ignite shortfalls that should sail past $1 trillion in 2025, the budget office said. That would push the government’s accumulated debt that year to $21 trillion, or 77 percent the size of the country’s economy, threatening higher interest rates, surging government debt costs and other problems.

Republicans said the report underscored the need to curb spending. Congress has already approved a blueprint claiming a balanced budget in a decade by squeezing savings from Medicare and Medicaid, and they want to retain caps on agency spending enacted in a 2011 budget deal.

“Without control over spending, our nation will lose control over its own future,” said House Budget Committee Chairman Tom Price (R-Ga.).

Democrats say such cuts are unneeded. Maryland Rep. Chris Van Hollen, top Democrat on the budget panel, said lawmakers should make “necessary investments” in education and other programs and said “serious negotiations” will be needed to avoid a government shutdown this fall.

Though GOP leaders have said they won’t let the budget clash spark a government closure as the 2016 elections approach, they may have a tough time winning conservative votes to pass needed spending bills.

This year’s $426 billion projected deficit would be the smallest since the $161 billion budget gap of 2007. The fiscal year runs through Sept. 30.