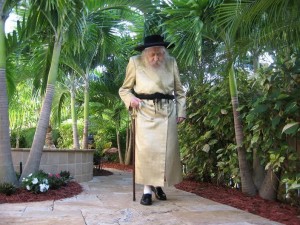 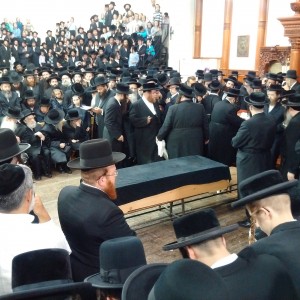 The Torah world was plunged into mourning Wednesday with the petirah of the Tosher Rebbe, Harav Meshulem Feish Lowy, zt”l, at the age of 93.

One of the eldest and most venerated Rebbes of the generation, the Tosher Rebbe was frequently hospitalized in recent years. Since Adar 5768/2008, when he contracted severe pneumonia, his health was in a state of decline.

Communities all over the Jewish world davened fervently for his recovery, and the name Reb Meshulem Feish ben Tzirel was constantly on the lips of those who admired him, as his health fluctuated over the past years.

Several weeks after the pneumonia, the Rebbe recovered and returned home to Tosh, in Canada. But since then he has been very weak. When he appeared in the beis medrash that Purim, the Chassidim cried with joy at what was seen as a medical miracle.

Two weeks ago the Rebbe attended the marriage of his great-granddaughter. Yesterday his condition deteriorated drastically; he was classified as critical and his family was summoned. In the afternoon hours, he passed away.

The Rebbe was born in 5682/1922 in the village of Nirtosh, known as Tosh to the Jewish population. His parents were Harav Mordechai Segal Lowy, the eldest son of Harav Elimelech of Tosh, and Rebbetzin Tzirel, the daughter of Harav Yaakov Fekete of Nirbator.

At the age of 12, the Rebbe traveled to Kalov, to the yeshivah headed by his great uncle, the Rav of the city, Harav Menachem Braude, the Be’er Menachem. At that young age he was noted for his hasmadah and devotion to his learning and was recognized as an iluy.

On 23 Kislev 5703/1943, his grandfather passed away, and his father, Rav Mordechai, was appointed Rebbe.

In 1943, the Rebbe was drafted to the forced labor brigades in Hungary and sent to camps in Koschitza and Margita. The overseers treated him as if he were crazy, because of his piety, and that made it possible for him to maintain a religious lifestyle.

In March 1944, Hungary was captured by the Germans. In April, the Jews of the region were assembled, among them the members of the Lowy family, into the Nirgehaze ghetto, and from there they were sent to Auschwitz. Most of the Rebbe’s extended family perished there, and his father, the Rebbe, was murdered on Rosh Chodesh Elul 5704/1944.

After the Red Army entered Margita, the Rebbe was released from the labor camp. He then traveled to Arad, Mako, and finally to Kleinwardein.

In 5706/1946 he married Rebbetzin Chava, the daughter of Harav Yehudah Weingarten of Yerushalayim, a descendant of the Rebbe Reb Elimelech of Lizhensk.

He was appointed by the survivors of Tosher Chassidus to serve as the Rebbe in Nirgehaze, where he stayed for two and a half years. He served there as a Dayan on the special beis din that helped agunos remarry after the war. At that point, fear of the communist regime led him to instruct his community to leave the country.

After two years in Austria, in Adar 5711/1951 the Rebbe arrived in America. He first resided in Williamsburg, and later moved to Montreal, Canada, where his older brother, Reb Chaim Yosef, lived. Their sister Fraidel, the wife of Harav Shmuel Meir Leifer, also survived the war.

As soon as he arrived in Montreal, the Rebbe decided to establish his community outside the city in order to avoid the influences of the outside world.

In 5723/1963, the Rebbe established a chassidic neighborhood named Kiryas Tosh in the Boisbriand suburb, about 30 kilometers from Montreal. Over the years many Chassidim flocked to him, and there are also Tosher communities in Brooklyn, Monroe, London, Israel and Belgium.

A full range of institutions was established in Tosh, including schools for boys and girls, a yeshivah gedolah and ketanah, and anything else a Jewish community needs. Today, some 400 families live there.

The Tosher Rebbe loved peace and harmony and would pursue it; he avoided discord like it was fire. He was known for his ahavas Yisrael and disbursed tremendous sums for tzedakah. He was admired by all, and people from across the spectrum streamed to his court. Thousands of Chassidim from the United States and Canada, from Eretz Yisrael and from Europe, visited him regularly, especially for Shabbosos and Yamim Tovim, to witness his holy visage and to receive a brachah from him. Among those who came were many Chassidim of other courts, as well as Litvishe Yidden, businessmen, Sephardim and Ashkenazim.

The Rebbe’s avodas hakodesh was carried out with tremendous mesirus nefesh, the Chassidim relate, and note that until his final days he made sure to complete the entire sefer Tehillim every day, no matter what. He spent most of his day davening, as each tefillah took many hours. Only after an exhausting tefillas Maariv did he allow himself to eat something — a meal that was breakfast, lunch and supper in one.

His divrei Torah and stories were printed in the sefarim “Avodas Avodah.”

The Rebbe was widowed on 21 Elul 5756/1996 of his Rebbetzin Chava, a”h. He subsequently married Rebbetzin Malka Lowy, shetichyeh.

On 18 Teves 5758, the Rebbe’s oldest son, Harav Mordechai, son-in-law of Harav Yechezkele Mertz, zt”l, was niftar at the age of 50. The petirah occurred in the middle of Shacharis, when Rav Mordechai was saying Krias Shema. Since it was on a Friday, the Rebbe carried on his avodah throughout Shabbos as if all were regular, to the astonishment of the Chassidim.

The levayah was held Wednesday evening in Tosh.

This article appeared in print on page 1 of the August 13th, 2015 edition of Hamodia.