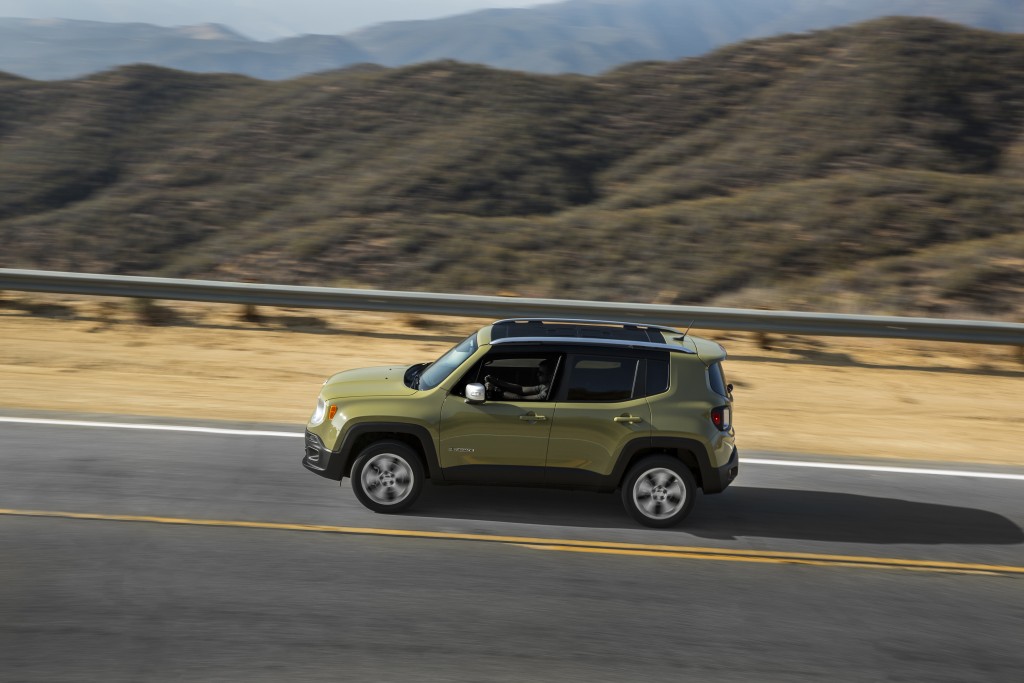 The Renegade is Jeep’s newest vehicle, a subcompact cute-ute aimed at young buyers.

It’s built on a new platform that also supports Fiat’s intriguing 500X, and is joining a growing niche that includes the Kia Soul, Nissan Juke and Mini Countryman.

The one I had recently didn’t get off to a great start, arriving in a sand color that appeared to have been inspired by a freshly pressed pair of Dockers.

Here’s the good news, though: The Renegade looks better in metal than it does in photos, and like that pair of Dockers, wears surprisingly well.

Short, narrow and tall, the Renegade struggles with awkward proportions.

Very short overhangs front and rear give it some off-road flair, while a short, flat hood and big round headlamps provide some Jeep character.

In addition, the Renegade has a signature Jeep seven-slot grille. But if you look closely, the “slots” are just blacked-out textured pieces of plastic.

Everything on the Renegade seemed square, including the wheel openings, large doors and ungainly top, which not only seemed too tall but was fitted to an upright windshield.

As you may expect, the Renegade offers two- or four-wheel drive. Mine was a two-wheeler, wearing city-sissy 225/55 tires wrapped around 18-inch alloy wheels.

And it seemed to get worse. The Renegade Limited I had was front-wheel-drive, spun by a fuel-sipping four-cylinder engine — just like some $18,000 econobox.

Let’s hope for a small apocalypse.

Actually, though, the Renegade emerged as one of those surprising vehicles in which the whole is considerably greater than the sum of its parts.

The 2.4-liter four-banger in mine cranked out 180 fairly healthy horsepower and was tied to a thoroughly modern nine-speed automatic.

As a matter of fact, the transmission – a unit used in several Fiat Chrysler vehicles – was the first in any of the FCA vehicles I’ve driven that seemed well-tuned, upshifting and downshifting properly.

Most of the time, it functioned seamlessly, keeping the engine in its 4,000-rpm range. Drive it like an adult, and the Renegade can return 22 miles per gallon in town and 31 on the highway.

Moreover, the 2.4-liter motor produced good low- and mid-range torque, pushing the 3,100-pound Renegade to 60 in about 8.7 seconds, according to Car and Driver.

Not only did the engine function reasonably well, it felt smooth and lively, and sounded fairly upscale.

Just for the record, the only time I got a little off-road in the Renegade was while negotiating my ancient driveway.

But several magazines have generally given four-wheel-drive Trailhawk models good reviews for their dirt-and-mud prowess, so even tiny Renegades can flash some Jeep genes.

Around town, the Limited I had rode like some midrange European sedan, stepping over bumps and imperfections with taut confidence.

Even more unexpected was its steering, which was quick, loaded up nicely in curves and conveyed pretty decent road feel.

As a result, the Renegade felt unusually agile for its clumsy 66-inch height, tackling curves with a bit of body roll but maintaining its overall composure.

More surprises await you inside.

The coal-black interior in my $25,865 Renegade felt roomy, semi-refined and reasonably well-appointed for a vehicle with a below-average price.

A deep, flat dashboard, for example, looked like it belonged in something bigger, wrapping around a broad hood over the instrument panel.

A 5-inch display screen dominated the center of the dash, of course, but three large real-world knobs beneath it controlled the climate system. (Three points for old school.)

Square climate-control vents sat atop the midsection of the dash, which in the Renegade seemed sort of appropriate.

Though the vehicle’s door panels were plastic – as expected in anything under 30 large – they had padded armrests.

Also, for those of you who occasionally must transport large, surly teenagers, the Renegade sports good legroom and excellent headroom in back. Plug them into digital devices, put some sunglasses on them and they should be fine.

After a week with the Renegade, I had to admit that it mostly exceeded my expectations.

But here’s something to consider: In two-wheel-drive form, the Renegade might look like an SUV, but beneath that boxy body lies a well-executed compact sedan that would probably be no more capable in ice or mud or on rocky terrain than a Honda Fit.

Although I rarely recommend four-wheel drive because it adds weight, I think I would insist on it in the Renegade just to make it a real Jeep.

Order it with some decent all-terrain tires, and you should be more or less ready to go anywhere.

AT A GLANCE: 2015 Jeep Renegade Limited

Engine: 2.4-liter four-cylinder with 180 horsepower and 175 pound-feet of torque