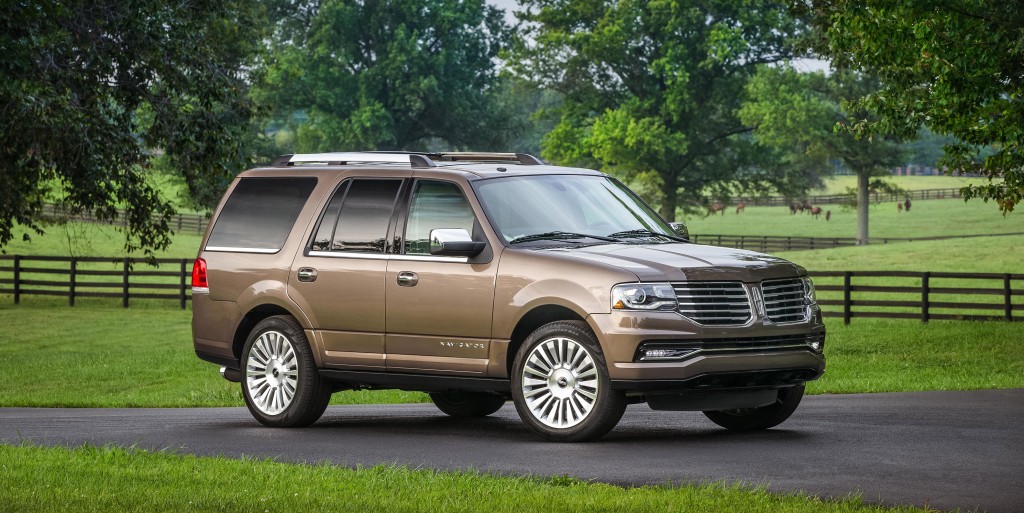 In the full-size premium SUV class, the Lincoln Navigator has been updated for 2015, and continues to be the ultimate luxurious people hauler.

With the makeover, the Navigator got a more-powerful engine, redesigned exterior and interior, and some great new technology. It also continues to be available in two lengths – standard, at 207.4 inches long, and the L model, which is nearly 15 inches longer.

Not only does it offer more horsepower and torque than the previous-generation Navigator’s V-8, it also brings EPA-estimated best-in-class fuel economy of 16 mpg city/22 highway/18 combined on base two-wheel-drive models.

The Navigator is the perfect family SUV for daily use and those weekend or cross-country trips.

Our test vehicle was the four-wheel-drive Reserve regular-length model, which has EPA ratings of 15 mpg city/20 highway/17 combined. On the window sticker, the price is broken down by first listing the price of the base standard-length four-wheel-drive model ($65,055), then adding the Reserve option as a package ($6,850) and the power moon roof ($995) for an additional $7,845. Total sticker was $73,895.

The L version is similar to the Cadillac Escalade ESV, GMC Yukon XL and Chevrolet Suburban (which is the extended version of the Tahoe). With the Navigator, both lengths come with three rows of seating, just as the GM sport utilities do, with room for up to eight people.

With the extended-length model, there is more cargo space behind the third row, but the seating area is the same size as the standard length except for nearly a half-inch more headroom in the third row.

The regular-length Navigator has a 119-inch wheelbase, and up to 103.3 cubic feet of cargo space, but just 18.1 cubic feet behind the third row.

L models have a 131-inch wheelbase, and can accommodate up to 128.2 cubic feet of cargo with both rear seats folded, or 42.6 cubic feet behind the third row.

Our standard-length tester had a cavernous interior, but if we were taking a family trip with people riding in the third row, we probably would have wanted the extra cargo space the L model provides behind that seat. We didn’t need the third row, but we checked it out, anyway. It wasn’t difficult for younger people (think teens and kids) to get back there, and on a couple of short runs, we let kids ride back there and heard no complaints.

Exterior changes on the redesigned Navigator include the new signature Lincoln split-wing grille, a new hood, jewel-like daytime running lights, high-intensity discharge adaptive headlights with LED accents, and a new power rear liftgate. Lincoln says there are 222 LEDs illuminating the exterior, but we didn’t count them.

Standard are 20-inch ultra-bright machined-aluminum wheels, but our tester got the Reserve model’s special 22-inch wheels.

Also included were power-operated running boards, extending under both doors on each side. They automatically deploy when the doors are opened and retract when the doors are closed. My very short wife liked this feature immensely, because otherwise it’s a big step up for her to get into the Navigator.

The Reserve Package offers the power running boards in Tuxedo Black or bright stainless steel; ours were the black ones.

We had surprisingly more-than-adequate power with the new, twin-turbo 3.5-liter EcoBoost V-6 engine, which cranks out 380 horsepower and 460 foot-pounds of torque. It’s connected to a six-speed Selectshift automatic transmission, which has a manual-shift feature.

Lincoln says the EcoBoost engine’s combination of turbocharging and direct fuel injection “creates a smoother torque curve than larger-displacement V-8 engines,” and our test vehicle never seemed to lack for power even while passing cars on hilly two-lane roads. A 4.10:1 rear-axle is standard on the L models and optional on the regular models, providing even more low-end torque for easier towing.

The Navigator can tow trailers weighing up to 9,000 pounds, and it has a maximum payload of 1,570 pounds (people and cargo combined). Trailer sway control is standard.

Even at highway speeds, the Navigator was quiet inside, thanks in part to its new acoustic laminated glass called SoundScreen, along with sound-deadening materials in the carpet and headliner, and better insulation in the door and floor panels.

The Lincoln Control Trac four-wheel-drive system is designed to improve traction on slippery surfaces and off-road, but also helps improve handling on dry roads – especially those with loose surfaces.

Among mechanical features is the electric power steering system, which we found to be efficient at low or high speeds.

Hill Start Assist is standard on all models, and Hill Descent Control is included on four-wheel-drive versions. Hill Start Assist holds the vehicle momentarily when the brake is released on a hill, eliminating rollback on startup.

The Hill Descent Control allows the driver to set the preferred speed, and the system applies brakes as needed to hold that speed on steep downhill grades. This is a good feature for off-road driving or trailer towing.

Inside the cabin, there is upgraded premium leather on all three rows of seats, as well as on armrests, the center console lid and shifter. Our tester had the Dune leather, with bucket seats up front. The steering wheel was made of premium Wollsdorf leather and wood.

Our vehicle’s exterior color was Java Metallic. We also had the new hand-wrapped leather instrument panel with contrast stitching, a leather glovebox door, and premium Zircote wood trim throughout the cabin.

Although it can seat up to eight, the Navigator can be configured with two captain’s chairs in the second row, which limits seating to seven, with or without a center console. Otherwise, there is a fold-flat three-person bench in the second row.

The PowerFold third-row seat is convenient when you have extra cargo and don’t need that seat for passengers. It holds up to three people.

A standard passive-entry system allows keyless access, and there is keyless pushbutton start, as well.

SYNC with MyLincoln Touch is standard, and its driver-connect system includes a choice of voice-activated or touchscreen controls to make phone calls, play music, manage the navigation system or set the interior temperature. It includes a 4.2-inch LCD screen in the instrument panel, an eight-inch touchscreen in the center stack, and traditional knobs for easy operation (thank you!).

Highlights: Completely redesigned for 2015, the Navigator truck-based SUV comes in regular and extended-length versions, now with an EcoBoost V-6 engine; the V-8 engine has been discontinued. The vehicle is roomier, better-equipped and more comfortable than before, and also more fuel-efficient. And it still carries a big family and their stuff.

Negatives: It’s a big vehicle that can be hard to fit in some tight spaces, including some residential garages.