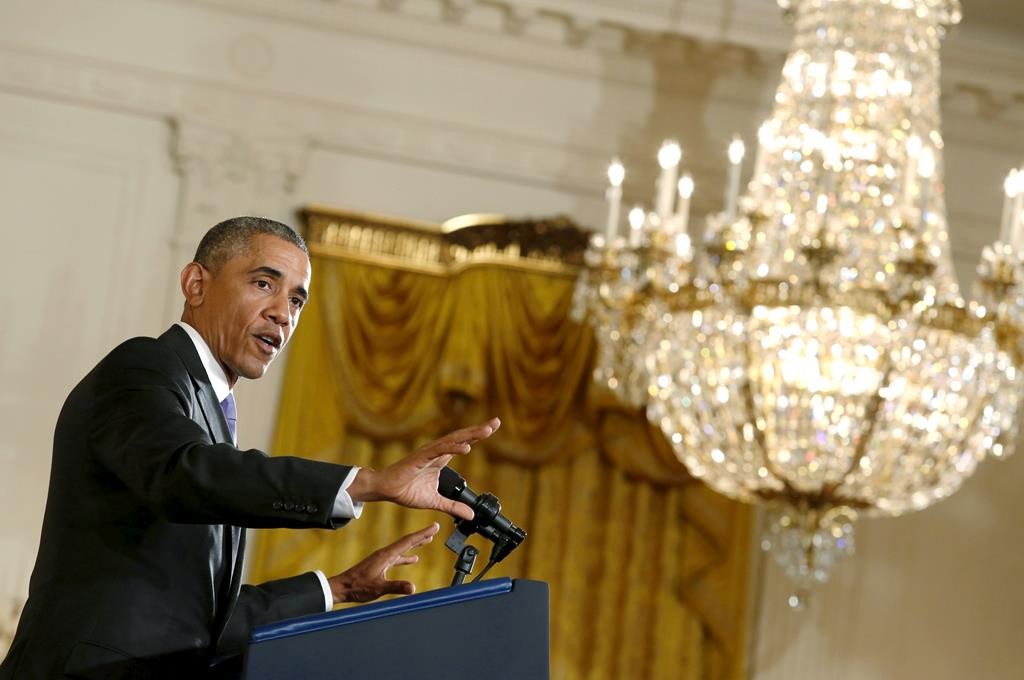 President Barack Obama vigorously defended the nuclear deal with Iran on Wednesday, casting the historic accord as the only possibility to avert war with Iran and a nuclear arms race in the Middle East.

With his foreign policy legacy on the line, Obama put the onus on the deal’s critics to voice an alternative, and said those who prefer a military strike should own up. He said the U.S. faces a “fundamental choice” — aiming his comments squarely at Congress, where lawmakers have a two-month window to try to thwart the deal.

“If we don’t choose wisely, I believe future generations will judge us harshly,” Obama said, describing a potentially squandered opportunity to make the Mideast and the world a safer place. The deal’s critics allege exactly the opposite, suggesting it could spur Iranian foes like Saudi Arabia to launch their own nuclear program.

In a reminder of the tough road ahead, Obama conceded that the deal will do little to quiet many other U.S. concerns about Iran. He acknowledged it was likely that the easing of economic sanctions would free up funds that Iran could use to sponsor terrorism against Israel or other countries.

“That is a likelihood,” Obama said, though he predicted it wouldn’t be a “game-changer.”

As Obama spoke at the White House, the deal’s critics were only growing louder. House Speaker John Boehner’s spokesman said Obama had shown himself to be “hopelessly disconnected from reality.” And Israeli Prime Minister Binyamin Netanyahu, addressing his country’s parliament Wednesday, suggested Israel could still take military action against Iran’s nuclear program even if the deal proceeds.

“Without a deal, we risk even more war in the Middle East, and other countries in the Middle East would feel compelled to develop their own nuclear weapons,” Obama said, adding that such a chain of events would risk a nuclear arms race “in the most dangerous region in the world.”

Obama’s allies were mounting a concerted push to sell the agreement to skeptics, while critics warned of dire consequences.

Vice President Joe Biden, who spent the morning on Capitol Hill briefing House Democrats, told reporters he was confident lawmakers would get behind the deal. At the United Nations, the U.S. began circulating a draft Security Council resolution to authorize the deal.

Meanwhile, Iranians took to the streets of Tehran to celebrate the accord, and even Iran’s hard-liners offered only mild criticism — a far cry from the outspoken opposition that the White House had feared.

Obama said the U.S. would keep seeking Tehran’s cooperation on other security issues, but acknowledged it wasn’t likely.

Aiming to frame the parameters for the growing debate, Obama bemoaned that opponents have been trading in “speculation or misinformation” about the deal. Still, he acknowledged, “We live in Washington, and politics do intrude.”