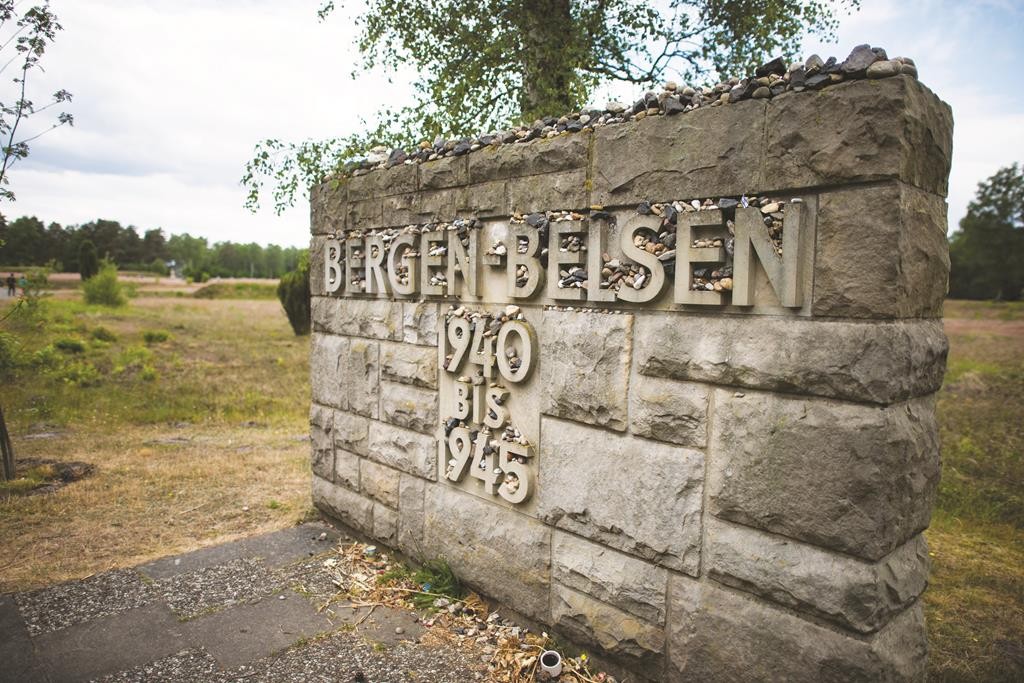 Queen Elizabeth II concluded her three-day state visit to Germany on Friday with a somber visit to Bergen-Belsen, the first former Nazi concentration camp she has visited.

The queen and her husband, Prince Philip, met with survivors and former British soldiers who were among those who liberated the camp where teenage diarist Anne Frank and her sister Margot died 70 years ago.

“I’m very happy that the queen can do this for the British soldiers,” said Rudi Oppenheimer, one of the Bergen-Belsen survivors who greeted her at the site in northern Germany, near Celle. “They did so much. They never talked about it, they couldn’t talk about it. They didn’t tell their wives or their children, they were so horrified by what they saw,” added Oppenheimer, who immigrated to Britain after the war.

Both the queen, 89, and Philip, 94, supported the British war effort against the Nazis during World War II. The queen, then a princess, was moved out of Buckingham Palace at the height of the blitz for safety’s sake, retreating to Windsor. She later served in the Women’s Auxiliary Territorial Service and was trained as both a military truck driver and a mechanic. Prince Philip served throughout the war in the Royal Navy.

The queen and Philip made state visits to Germany in May 1965, May 1978, October 1992 and November 2004, but this was the first time they visited the site of a former Nazi camp.

“The memory of the Holocaust remains such a fundamental aspect of modern Jewish identity that the queen’s journey to memorialize the victims will be viewed as tremendously significant by Jewish communities across the world,” said Rabbi Ephraim Mirvis, the Chief Rabbi of the United Hebrew Congregations of the Commonwealth in Britain, who met with the queen at the Bergen-Belsen ceremony.

Queen Elizabeth and Prince Philip were shown through parts of the former camp by the Bergen-Belsen Memorial’s director. They paused at a gravestone in memory of Anne Frank and her sister, who was born the same year as Elizabeth, before walking alone along a long path to the House of Silence, a modern structure set up as a place of reflection for visitors. The two then placed a wreath at a memorial to the camp’s victims.

“Bergen-Belsen has a central place in our history, and as the eyewitnesses grow older and frailer, we must all take on the responsibility to remember what happened there,” said Karen Pollock, chief executive officer of the U.K.-based Holocaust Education Trust. “That Her Majesty has visited Bergen-Belsen in such a significant year — 70 years on from its liberation — is particularly poignant and shines a spotlight on the importance of Holocaust education and remembrance.”

The royal couple greeted and talked with the survivors, liberators, and schoolchildren who were on hand to greet them.

Oppenheimer, who was only 12 when Bergen-Belsen was liberated but still remembers the vivid images of corpses piled high around the camp, said it was a great honor for him to be invited to the ceremony.

“For me, it’s wonderful,” said Oppenheimer, 83, who speaks on behalf of the Holocaust Educational Trust and talked to the AP ahead of the queen’s visit. “But it upsets me that neither of my parents knew about it, or my uncle; he was always so proud that we are integrated into the English system.”

Earlier in the day, in Berlin, a more festive atmosphere prevailed as flag-waving crowds greeted Elizabeth next to Berlin’s landmark Brandenburg Gate.

The queen, looking upbeat and spry despite a busy schedule, was handed bouquets by schoolchildren who waited outside her hotel and she smiled broadly when greeted by a little boy dressed like a king, complete with a blue and gold crown.

Elizabeth was warmly received at all stops since arriving in Berlin Tuesday night, with large crowds turning out in her honor and German media providing blanket coverage of the visit. She returned home later Friday.