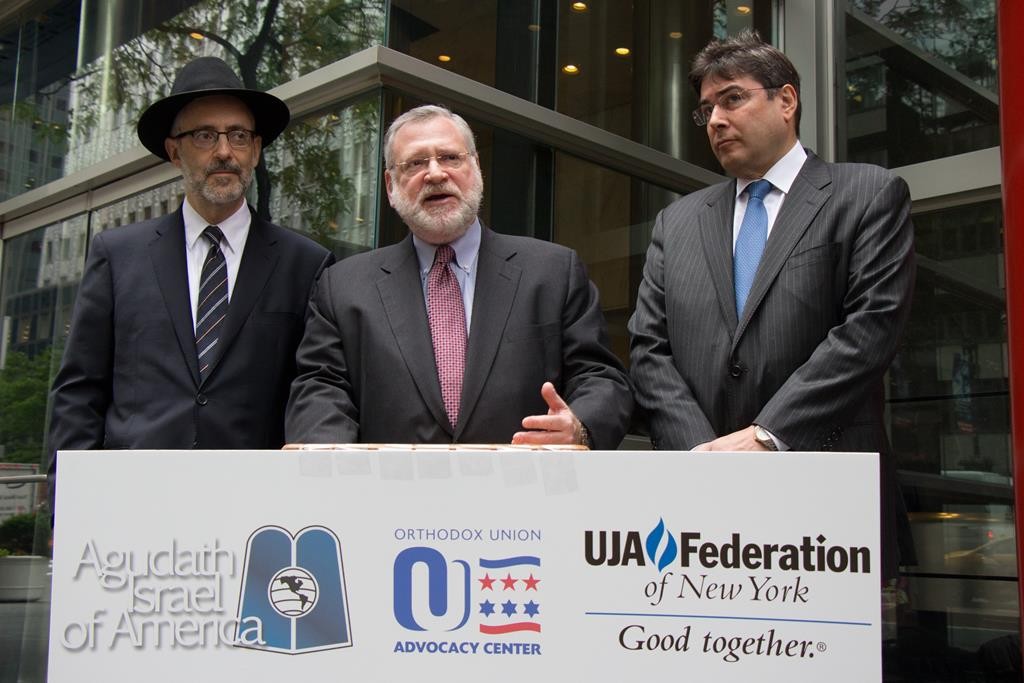 One week before the end of Albany’s session next Wednesday, Jewish groups are closely monitoring several bills winding their way through the legislature — chiefly a potentially historic tuition aid bill and another that would impose a veto-empowered monitor over the heavily Orthodox East Ramapo school board.

Much less visible is a push to renew “as is” a developers’ tax break that has helped lower the price of housing in Orthodox Jewish areas of New York City. Mayor Bill de Blasio wants it changed to reflect his One New York package of adding or preserving 200,000 affordable housing units across the city, cutting out a portion that helps make neighborhoods such as Boro Park slightly more affordable.

Albany’s session ends on Wednesday, June 17, although Gov. Andrew Cuomo is likely to declare a “message of necessity” allowing lawmakers to work on after the deadline if his priorities are not passed.

This session, yeshivah advocates feel — in conversations Hamodia has held with several of them in recent days — marks the first real chance in history at getting significant state aid to yeshivah parents. Cuomo, according to the activists, has in recent weeks shown a real desire to get his Parental Choice in Education Act passed.

Agudath Israel of America on Monday joined two other major Jewish organizations for a press conference to demand that the Assembly act to help a constituency that has long been mostly excluded from the $24 billion state education budget.

Leaders of Agudah, the Orthodox Union and the UJA-Federation of New York assembled in front of Cuomo’s Manhattan office to urge passage of Cuomo’s bill, which reimburses low-income parents $500 per child in private school tuition and allows a tax deduction for contributors to a private school scholarship fund.

That the three groups are standing as one “shows how important this legislation is to us,” said Rabbi Chaim Dovid Zwiebel, Agudah’s leader. “It brings real choice into the concept of parental options for education.”

Tax credits of up to 75 percent would be available for both individuals and businesses that donate to nonprofit scholarship organizations for students at non-public schools. This is capped at $50 million a year. Additionally, tax credits of up to $500 per student per year would be offered to non-public school families earning less than $60,000 a year.

The Senate already passed its own version of the scholarship fund tax credit portion, although they would give donors 90 percent off their tax bill instead of the 75 percent the governor’s bill would. That was sponsored by Sens. Simcha Felder and Marty Golden.

However, the Democratic-controlled Assembly has shown no inclination to move on either bill. Led by Ellen Jaffe, a Democrat who represents the Orthodox community in Rockland County, and Deborah Glick of Manhattan, many Assembly members deride the scholarship fund credit as a giveaway to the rich. An intense mail and internet ad campaign urges residents to call their legislators to oppose the bill.

In Orthodox areas in Brooklyn, there are two Assembly members who are not supporting it — James Brennan and Rodneyse Bichotte, both Democrats from Midwood. InvestInEd, a group advocating for private school aid, has made thousands of calls and sent mailers in those districts to urge residents to call Brennan and Bichotte to support the bill.

Brennan has said he has not decided but has privately told people that he cannot vote for the bill in its current version. Bichotte, who last week apologized for accusing yeshivah advocates of racism, is against the bill.

On Monday, Bichotte held what she called a “Public Thanks to Assemblymember Bichotte for her continued opposition of Governor Cuomo’s Education Tax Credit” rally in her district.

At the press conference in front of Cuomo’s office, Allen Fagin, executive vice president of the Orthodox Union, framed the legislation as being about “fairness and civil rights.”

Meanwhile, a key Assembly panel last Wednesday voted to impose a beefed up monitor position over the East Ramapo school board, legislation that is decried by many Orthodox Jewish groups as undemocratic and bordering on anti-Semitic.

The bill that passed the Assembly’s education committee largely along party lines is the first of several hurdles that must be cleared before it can become law. All Republicans, plus two Democrats — Sheldon Silver of Manhattan and Walter Mosley of Fort Greene, Brooklyn — voted against the bill, but it wasn’t enough to overcome the two-thirds majority of Democrats who supported it.

The bill calls for the monitor to oversee the board for five years, with power to veto any decisions taken by the board. At that point the legislature will review how things have improved.

Aron Wieder, a former East Ramapo school board president, said that the concept of having a state official overrule an elected board has rattled Orthodox community officials. Some observers are even concerned that, for example, the overseer may rescind funding for yeshivah busing and give the money for a public school art class.

The bill now heads to the Ways and Means committee, and afterward to the full Assembly, for a vote. It must then be voted on in the Republican-led Senate. Assembly Republicans and Senate leaders have indicated that they have strong reservations about it.

“To me, this looks like a state takeover,” said Assemblyman Al Graf, a Long Island Republican and former teacher, according to Capital New York. “It just sets a bad precedent, because if we could do it here, we could do it in any other school district.”

Assemblyman Dov Hikind, who is not a member of the education committee, agreed that it would establish a “dangerous precedent.”

“Where does it end?” asked Hikind, a Brooklyn Democrat. “There will be no point in even electing a school board anymore; those elected members will become a board of advisors as the appointed monitor becomes the czar. We eliminate the democratic process.”

The East Ramapo school board is controlled by Orthodox Jews, a fact reflecting the overwhelming majority of Orthodox Jews living in the district. East Ramapo, home to Monsey, Spring Valley and New Square, has approximately 25,000 students attending non-public schools, with only 8,500 in the public school system.

School board supporters say that regardless of the religious makeup of the board, it is insulting to insinuate that Orthodox Jews cannot make decisions both for yeshivos and public schools.

“Frankly,” Rabbi Zwiebel told Hamodia earlier this year, “the notion is offensive to us that Orthodox Jews cannot run a school board in an equitable way simply because they send their children to yeshivos rather public school.”

Both Greenberg and Merryl Tisch, the chancellor of the New York State Board of Regents, who published an opinion piece in The New York Times on Wednesday, suggested that East Ramapo is similar to the situation in Lakewood, NJ. While many Times readers would not make the connection, Lakewood is one of the only other school districts in the nation where a majority of students send to yeshivah.

Lakewood, itself under fiscal monitoring with veto powers, last year nearly had its busing pulled by the monitor. That is what may happen if this bill passes in East Ramapo, many Rockland residents fear.

Mosley, who also represents parts of Crown Heights, initially co-sponsored the bill. However, citing “outright anti-Semitic overtones” in it, he voted “no” on Wednesday.

Another item is a law giving de Blasio control of his city’s schools, which originally passed in 2002 but sunsets this month. Citing achievements by the de Blasio administration since the mayor took office last year, specifically for Orthodox special education children, Agudah has joined others in urging the legislature to renew the law.

De Blasio had wanted a permanent renewal but is willing to support a three-year renewal. Senate Republicans have suggested a one-year extension.

There is also a developer’s tax break that expires this month, called the 421-a, which de Blasio wants to end if it won’t be changed to demand more affordable housing. Cuomo has criticized the mayor’s plan and called for it to be extended in its current form.

“I think it has to either be reformed and kept, or done away with,” the mayor said. “So I said either mend it or end it.”

Councilman David Greenfield noted that the mayor’s plan would cut out the encouragement of the construction of affordable condos, which is vital for many neighborhoods like Boro Park.

“Without this crucial subsidy,” Greenfield says, “neighborhoods like Boro Park will be left out of affordable housing options.”

Boro Park ranks in the top 10 city neighborhoods in terms of rent burden and overcrowding, Greenfield said. Eliminating this tax benefit will raise the price of the condo and taxes “by at least $1,000 a month.”