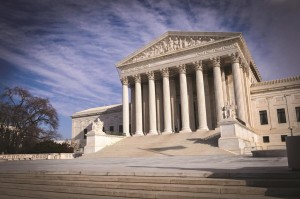 The U.S. Supreme Court on Monday ruled in favor of a Muslim woman who sued for discrimination after being denied a sales job at an Abercrombie & Fitch clothing store in Oklahoma because she wore a head scarf for religious reasons. The decision, which grants wide protection of religious beliefs and practices, was hailed by an extensive range of groups involved in the protection of religious liberty.

“The Supreme Court’s decision may have been rendered in the context of a Muslim woman’s head scarf, but it obviously has broad implications for observant Jews as well,” said Rabbi Chaim Dovid Zwiebel, executive vice-president of Agudath Israel of America.

He cited the broad application that the decision has on preventing employment discrimination — not only pertaining to religious garb, but also accommodation of shemiras Shabbos and the like.

In an eight-to-one decision in the important religious rights case, the court backed Samantha Elauf, who was rejected under Abercrombie’s sales staff “look policy” after coming to her job interview wearing the hijab, or head scarf, used by many Muslim women.

The decision marked a victory for the U.S. Equal Employment Opportunity Commission (EEOC), the federal agency that sued the company on Elauf’s behalf after she was turned down in 2008 at an Abercrombie Kids store in Tulsa.

Earlier in the court’s term, a decision protecting the right of a Muslim inmate to sport a beard for religious reasons gained similar accolades from advocates of religious freedom.

The court has taken an expansive view of religious rights. Last year, it sided with a Christian-owned company that objected on religious grounds to providing health coverage for certain items that its owners found objectionable.

“The Supreme Court’s decision is a major victory for Orthodox Jewish applicants,” attorney Nathan Lewin, who authored an amicus brief on behalf of the OU, Agudath Israel and other Orthodox organizations under the COLPA (national Jewish Coalition on Law and Public Affairs) banner, told Hamodia. “Under the lower court’s decision they would have been required to provide information that would frequently lead to rejection of their employment applications.”

COLPA’s brief recounts Lewin’s personal experience of having been the only member of the prestigious Harvard Law Review not to have received any offers of employment from leading New York law firms following his graduation from law school.

“It was plain to me, however, that although many law firms had made no explicit reference to my religious observance (two suggested during interviews that if I wanted to succeed as a lawyer I should obtain a ‘Rabbinical dispensation’ to work on Saturdays and Jewish holidays), they had decided that regardless of academic performance and other qualifications, accommodation to my religious observance was too bothersome to warrant giving me an offer of employment,” he wrote in his brief.

Lewin explained that the ruling protects job applicants from discrimination based on assumptions as to their religious needs, even if not explicitly declared by the interviewee. It buttresses prior legislation that grants applicants the right to withhold their need for accommodation of religious needs until after hire, at which point an employer could only rescind the position if he was able to prove that the accommodation placed “undue hardship” on the organization.

In an opinion by Justice Antonin Scalia, the court said Elauf only had to show that her need for an accommodation was a motivating factor in Abercrombie’s decision not to hire her.

The court’s opinion used a shomer Shabbos applicant to illustrate its position, saying, “An employer thinks (though he does not know for certain) that a job applicant may be an Orthodox Jew who will observe the Sabbath, and thus be unable to work on Saturdays. If the applicant actually requires an accommodation of that religious practice, and the employer’s desire to avoid the prospective accommodation is a motivating factor in his decision, the employer violates Title VII.”

Title VII is the section of the Civil Rights Act of 1964 that prohibits employers from refusing to hire based on religious accommodation.

Justice Clarence Thomas was the sole dissenter. He said that “mere application of a neutral policy” should not be viewed as discrimination.

Said Elauf in a statement issued by the EEOC: “Observance of my faith should not have prevented me from getting a job. I am glad that I stood up for my rights, and happy that the EEOC was there for me and took my complaint to the courts.”

Elauf initially won a $20,000 judgment against Abercrombie before a federal district court. The 10th U.S. Circuit Court of Appeals in Denver then threw that out, ruling in favor of Abercrombie, before the high court backed Elauf.

Abercrombie said in a statement that the case will continue, noting the justices had not ruled that discrimination took place. “We will determine our next steps in the litigation,” Abercrombie said.

The Supreme Court had to decide whether Elauf was required to ask for a religious accommodation to allow her to wear the scarf in order for the company to be sued under the 1964 Civil Rights Act which, among other things, bans employment discrimination based on religious beliefs and practices.

Despite wearing the head scarf, she did not specifically say that, as a Muslim, she wanted the company to give her a religious accommodation.

Abercrombie had the backing of business groups, including the U.S. Chamber of Commerce.

“The Orthodox Jewish community applauds today’s ruling by the Supreme Court — as should Americans of all faiths,” said Nathan Diament of the Orthodox Union. “Today’s ruling not only affirmed basic protections against religious discrimination … [I]n the words of the Court, ‘Religious practice is one of the protected characteristics that cannot be accorded [unfair] treatment and must be accommodated.’ This is a great day for religious freedom in the United States.”

This article appeared in print on page 6 of the June 3rd, 2015 edition of Hamodia.