Banks Fined More Than $5b, to Plead Guilty to Market Rigging 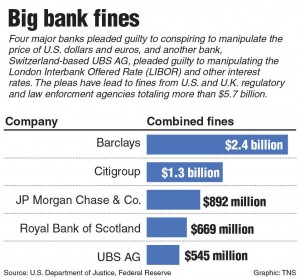 Four of the world’s biggest banks agreed Wednesday to pay more than $5 billion in penalties and plead guilty to rigging the currency markets — a rare instance in which federal prosecutors have wrung an admission of criminal wrongdoing from a major financial institution.

Traders at JPMorgan Chase, Citigroup, Barclays and the Royal Bank of Scotland were accused of working together to manipulate rates on the foreign exchange market, where hundreds of billions of dollars and euros change hands back and forth.

The penalties are a victory for the government and reflect a broader effort by the Justice Department, long criticized as reluctant to prosecute big banks, to tackle financial misconduct.

In the past 18 months, prosecutors have brought criminal cases against banks accused of tax evasion and sanctions violations, and have reached multibillion-dollar settlements with several others for their roles in the 2008 financial meltdown.

Still, the punishment announced Wednesday may have limited practical consequences.

The four banks will be able to continue to do business in the currency markets. No executives were charged, though that part of the investigation continues. And the fines, while large, are a fraction of what the institutions have made through currency trading over the past decade.

Prosecutors said traders shared customer orders via social media and used that information to profit at clients’ expenses. The traders called themselves “The Cartel,” and in one of those social media venues, a Barclays employee wrote: “if you ain’t cheating, you ain’t trying,” investigators said.

A fifth bank, Switzerland’s UBS – which was scrutinized years earlier in a similar scheme — has agreed to plead guilty to manipulating key interest rates and will pay a separate criminal penalty of $203 million.

This article appeared in print on page 3 of the May 21st, 2015 edition of Hamodia.