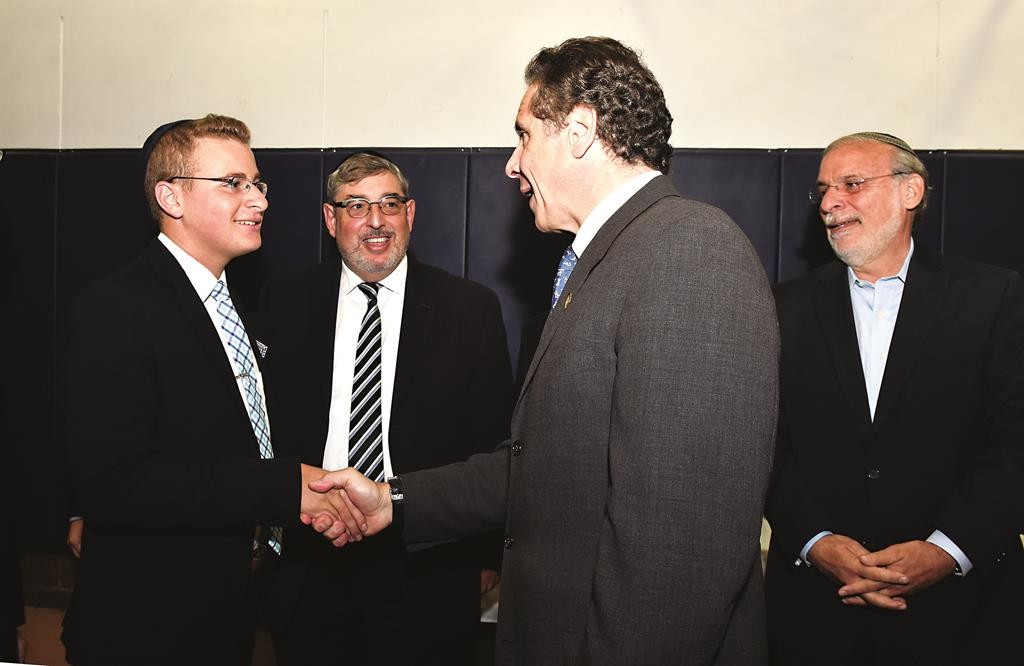 As he pushes potentially historic tuition aid legislation that would give yeshivah parents the most significant relief in decades, Gov. Andrew Cuomo paused on Sunday to acknowledge disappointment in his failure to get it done last year and said he’ll attempt to rectify it within a month.

Cuomo disappointed many in the Orthodox community for not passing the education tax credit even after he had termed it a “matter of justice” in a pre-election visit to Boro Park in 2013. That led people to believe that he would push the education tax credit through Albany in this year’s budget. The community ended up voting for him at higher levels than his overall statewide victory margin.

However, the bill, which in January passed the Republican-led Senate under the sponsorship of Senators Simcha Felder and Martin Golden, failed to cross the Democratic-controlled Assembly by the budget deadline in March. The governor, many felt, harmed the effort by initially tying it to the Senate passing the Dream Act. That bill, strongly pushed in the Assembly, would grant illegal immigrant students the same college funding aid as native residents.

In response to a question by this reporter, Cuomo said that he understood the community’s skepticism.

“This year I’m doing it much different than I did it last year. I put it in the budget, I made it a priority, I’m working very hard to get it passed and I’m more confident this year. But maybe I’m mistaken. This is an uphill fight. It’s not an easy bill to pass.”

The new $150-million bill, called the Parental Choice in Education Act, if passed, would be a historic moment for tuition payers, who have long been mostly excluded from the huge sums spent on education in New York — $22.5 billion for the current year.

It would allocate $70 million to give a $500 tax credit a year per child directly to low-income parents — defined as those earning less than $60,000 a year for a family of four. The credit is paid to parents regardless of whether they owe taxes, similar to an earned income tax credit.

It also has a 75 percent education tax deduction for donors to a scholarship fund, with a $100,000 maximum. The remainder of the funds is for public school initiatives.

Passage in both the Senate and Assembly is not assured. The Republican-led Senate already passed a more robust education tax credit bill in January, and Sen. John Flanagan, the majority leader, told Hamodia that he is still committed to have that become law, not Cuomo’s legislation.

The Education Investment Tax Credit “was one of the first pieces of legislation we passed,” Flanagan said. “It is something we are still very focused on from now until the end of session. That is a top priority.”

The Senate version of the EITC is more favorable on several fronts.

For one, it provides donors with a 90 percent deduction, rather than the 75 percent Cuomo is offering. So a $100,000 donation to a fund set up by, say, Agudath Israel of America, would slice $90,000 off the donor’s tax bill under the Senate bill but only $75,000 under the governor’s.

Additionally, the Senate is providing $150 million for the tuition aid bill — half of which is for non-public schools. Cuomo’s bill, while also worth $150 million, only sets aside a third — or $50 million — for donors to a private school scholarship fund.

Cuomo’s bill has captured the imagination of many Jewish groups, principally because it provides money directly to parents. Agudah termed it a “watershed moment” in easing the crushing tuition burden from parents and promised to make this a lobbying priority until the end of the legislative session on June 17.

The Senate is reportedly agreeable to adding the direct credit, but wants to make it more favorable. This may include raising the income level allowed above $60,000 for a family of four.

“It would be foolish of me to suggest it’s going to be our way or the highway,” Flanagan said. “The governor, to the best of my knowledge, added a component that would allow for a parental deduction for tuition. I think that will engender considerable support. … This will make a lot of other people find it more appealing.”

But Felder said that “it doesn’t make sense” to pass any new legislation until they see a concrete bill that passes the Assembly.

“We passed a tax credit bill,” he said. “That means there’s a potential law already that exists. The Assembly hasn’t done anything. The Senate is not going to pass new legislation when there’s a chance the Assembly will not do anything anyway.”

There are 400,000 private school students in the state, or 15 percent of the total number of students.

The direct aid to parents, Cuomo hopes, will attract more support in the Assembly than the education tax credit, which some Democrats have derided as a “tax break for the rich.”

He has set out on a campaign to rally support behind his legislation. He appeared on Sunday at Shaare Torah, where he was greeted by students cheering boisterously and waving placards. It was only Cuomo’s second visit to the Orthodox stronghold in Brooklyn since taking office a half-decade ago.

Cuomo repeated his assertion at the Flatbush yeshivah that helping parents with the tuition burden is a matter of “justice,” even urging the gathering of approximately 300 Jewish students and yeshivah heads to tell their legislator they should pass a bill he proposed or risk losing reelection.

“You say to every Assembly person and every senator: You want my vote? I want your vote and I want your vote on the education tax credit. And if I don’t have your vote, you don’t have my vote. They will listen to you. Politicians have very good hearing, you know that? It’s a fact. Because if they have bad hearing they are not politicians for long. … It’s a form of natural selection.”

Cuomo said that he has made the largest investment in public schools in history.

Cuomo is urging people to sign a petition to Albany lawmakers at InvestInEd.org. That automatically will send an email to the user’s assemblyman and senator, appealing for them to pass the bill.

The governor was introduced by Eddie Harari, a 17-year-old student at Shaare Torah, who added his own request: “To the legislators in Albany,” Harari pleaded, “please pass a bill — this year.”

Cuomo joked about his Italian ancestry and his family’s decades-long relationship with the Orthodox community, a connection that began under his father, former Gov. Mario Cuomo.

Education, the governor noted, “is your child’s life; it’s your family’s decision. But for your family to have a decision it has to be a real decision. And that’s why I was talking to Sol [Werdiger] about the Italian concept of mishpachah. But there’s another Italian concept I wanted to talk to you about — it’s called tzedakah. … It’s been used to mean ‘charity’ but the deeper definition is what Assemblyman Hikind said — it’s about justice.”

“It means that if it’s a real choice, you have to be able to afford it. And if you’re paying public taxes [to fund the public school system] with one hand and then you have to pay private tuition with the other, it’s no longer affordable. … So if you can’t afford the choice, you don’t really have the choice. And that’s not justice.”

But it was obvious that he was preaching to the converted.

“This is one of the most exciting ideas ever suggested,” Mr. Shlomo Werdiger, chairman of Agudath Israel’s board of trustees, said effusively as he introduced the event.

“We have been dreaming of this education tax credit our entire lives,” Greenfield said. “And today the governor is making this a reality.”

Cuomo noted that nothing is more important for the future of New York than education, and “your community has appreciated this historically.”

Cuomo joked that his father had a hand gesture he used to describe people with grand ideas who do not follow through. He mimicked the different ways elected officials use to get out of taking difficult votes.

“That’s this,” said Cuomo, copying the “talking” hand gesture. “That is talking. We are not here to talk, my friends. … We are not going to talk about it this year. We are going to get it done this year.”