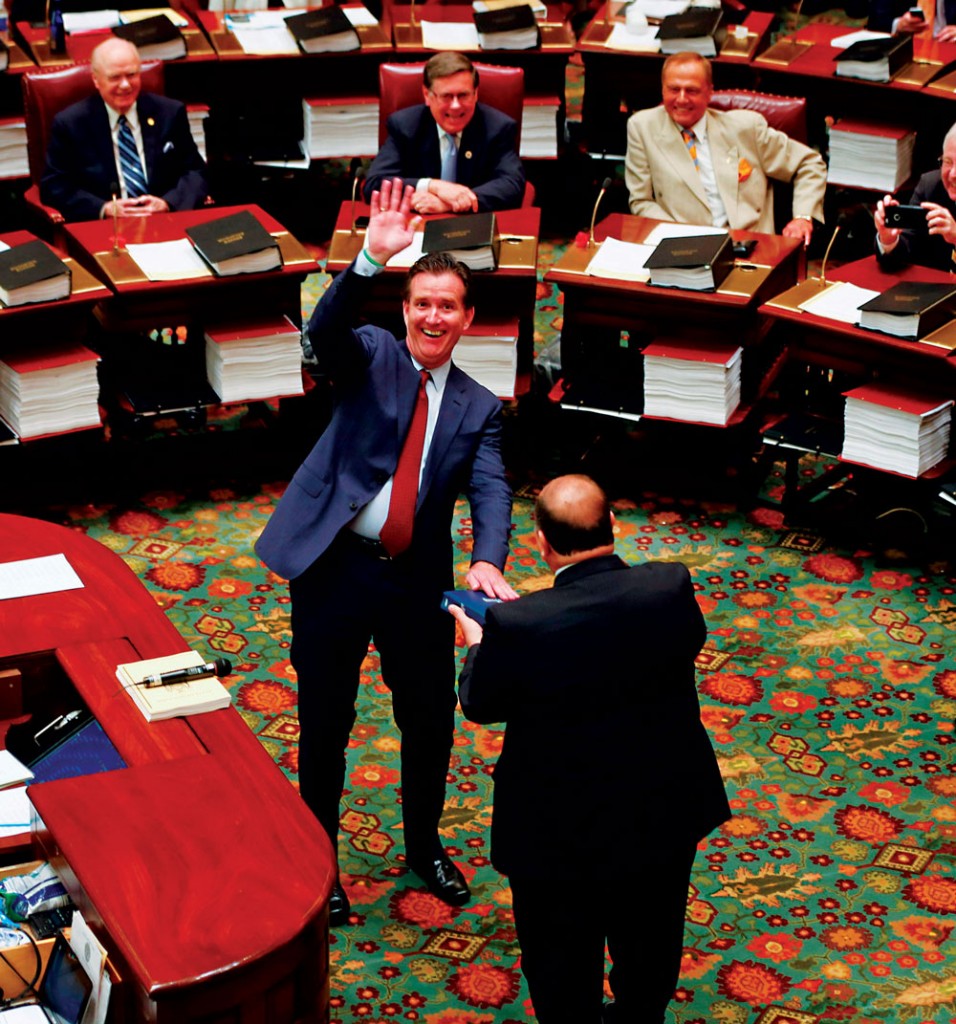 Activists for the Orthodox community lamented on Monday the departure of Senate Majority Leader Dean Skelos, who resigned his position as the chamber’s top Republican as he fights federal charges.

Following a midday conference meeting, Republicans who control the state Senate chose one of Skelos’s top lieutenants, John Flanagan, to lead their chamber after Skelos endorsed him as a successor.

Skelos, who was first elected to the Senate in 1984, said that he decided to step down to avoid distracting the Senate, and because the media glare had become too difficult for his family.

“The past seven days have taken a tremendous toll on my entire family, including my wife, my son, my 94-year-old father, my brothers and sisters and two young grandchildren, who have all been unfairly placed under the media’s spotlight,” Skelos said. “Most recently, a news photographer was in my son’s backyard and the disruption caused my two-year-old grandson to fall and split his lip open.

An Orthodox activist who spoke with Hamodia Monday said that Skelos’s friendship with the Orthodox community manifested itself in so many ways.

The biggest aid to yeshivos in decades — the Tuition Assistance Program, which for the first time expanded state aid to colleges to go to yeshivos as well — was shepherded from the starting line through the signing in 2010 by Skelos, the activist recalled. TAP currently helps yeshivos in the range of close to $23 million a year.

Skelos also muscled through a transportation law that ended up providing nearly 150 school buses for yeshivos in Boro Park alone. An initial $5 million grant for buses has now turned into more than $35 million a year.

Skelos also had his chamber pass — three times — a bill that would have provided tax credits for, among others, parents who send to yeshivos and other private schools. (It ended up dying in the Assembly.)

Meetings with Orthodox activists over the years were remarkable for their warmth, with him suggesting ways to get bills through an often tough Albany environment. He regularly repeated the story of how he, who is Greek Orthodox, smuggled tzitzis and sefarim into the former Soviet Union to supply Jews with religious items.

“It’s a very, very big loss for our community that a person like him left,” the activist said. “We were very fortunate that we had a leader like him in Albany all these years.”

Flanagan, Skelos’s handpicked successor, is a Suffolk County Republican who turned 54 last week. According to state Senator Simcha Felder, he is intimately familiar with the Orthodox community, having fought in nearly every one of the battles that brought unprecedented aid for yeshivah families over the past few years.

Felder, a Democrat who caucuses with the Republican conference, told Hamodia shortly after the leadership switch that Flanagan has been an aggressive advocate in all three major fights for yeshivah parents in his position as chairman of the education committee.

“I had the privilege of working with Senator Flanagan on passing the Education Investment Tax Credit in the Senate, securing funding for school transportation, and helping parents secure special education for their children,” Felder said. “Senator Flanagan has a proven track record of supporting our community, and I know that as majority leader he will continue to fight for our needs.”

Flanagan was chosen after he was endorsed by Skelos, who intends to keep his legislative seat, preserving his party’s 33 to 30 majority.

Felder, who as chairman of the New York City education subcommittee worked closely with Flanagan, was the only Democrat to vote for him. The rest symbolically supported Democratic leader Sen. Andrea Stewart-Cousins.

Flanagan emerged as the new leader after a three-hour closed-door meeting of Senate Republicans. Sen. John DeFrancisco, who had also contended for the top position, was at Flanagan’s side as he announced his victory.

“We come out of this unified,” said Flanagan, a 29-year legislative veteran whose career in politics began when his father, an assemblyman, died weeks before the election. “There is a lot of work that needs to get finished.”

Just before the vote, Flanagan shook hands with DeFrancisco and hugged Skelos.

The Orthodox activist who spoke with Hamodia said that he has a relationship with Flanagan and is confident that the friendship the community has built up with Dean Skelos will continue with the new leader.

“In the past couple of years of dealing with [Flanagan],” the activist said, “he showed a lot of passion in helping our community in all education matters. I’m comfortable saying that he will be a very strong friend of the community.”