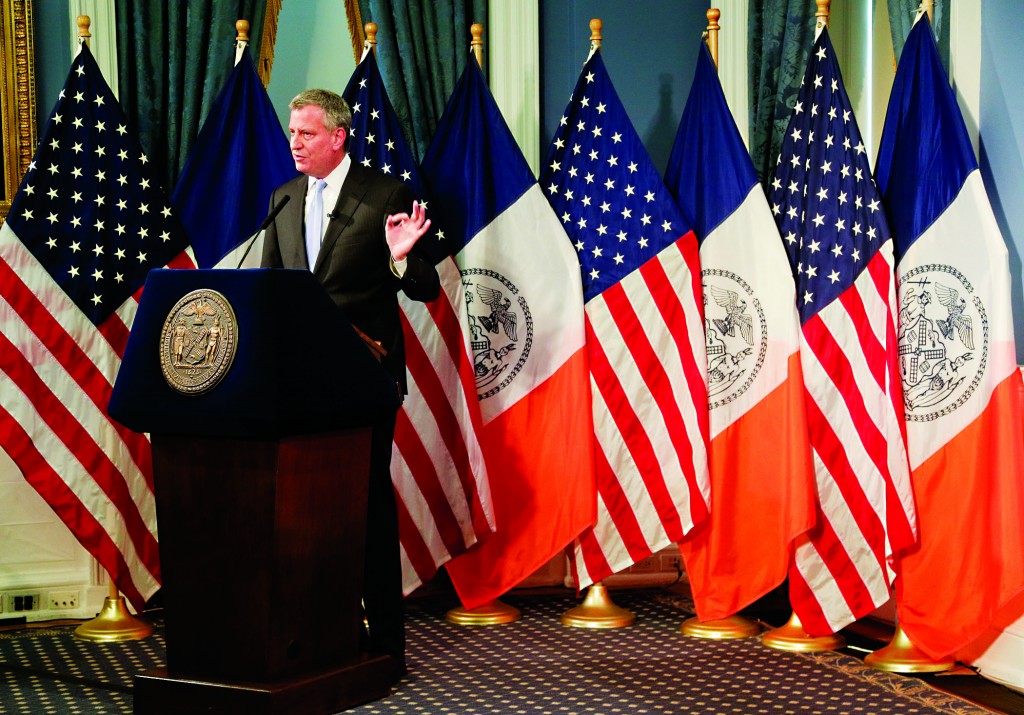 Tackling what had long been the annual bane of activists for large Orthodox families, Mayor Bill de Blasio on Thursday proposed making Priority 5 childcare vouchers an integral part of the budget, rather than something to be argued anew each year.

Unveiling his 2016 budget proposal, the mayor said he wants to allocate $12.6 million to the voucher program that aids two-income families who still struggle financially. That is less than the $17 million put forward by the City Council in their own budget, but potentially historic since it includes it in the baseline budget.

De Blasio’s $78.3 billion executive budget is a $600 million increase over his blueprint in early February. Since then, the city has learned it would have a $1.6 billion surplus in fiscal 2015 and 2016.

The two budget proposals must now be reconciled and voted on by the June 30 deadline.

The news was welcomed by Orthodox groups and voucher advocates.

“Mayor Bill de Blasio made good today on his pledge to fund child care vouchers in a way that would be meaningful to needy Orthodox Jewish families,” Agudath Israel of America said in a statement.

Until now, the budget itself was approved, but the voucher was included in a separate pot of money which allocated funds to various constituencies or communities. The latter group was part of what de Blasio referred to as the “budget dance,” in which the mayor and council faced off in funding certain projects by threatening to defund others.

By “baselining” Priority 5, de Blasio not only restores a significant amount of it that was eliminated by former Mayor Michael Bloomberg, but he makes it a permanent part of the budget. As a city councilman representing parts of Boro Park and later as public advocate, the mayor had led the fight to fund the voucher.

“This,” added Rabbi Chaim Dovid Zwiebel, Agudah’s executive vice president, “offers welcome reassurance that the battles over Priority 5 funding will now be a thing of the past.”

The voucher battle was led by Councilmen David Greenfield and Stephen Levin, resulting in the mayor’s announcement Thursday.

“I am pleased that these funds are being baselined so that we won’t have to fight about this every year,” Greenfield said. “Thanks to the mayor, we can now move on to the other key issues that the yeshivah community faces and have honest conversations.”

Levin called the mayor’s action “a major step for families in need of childcare in the communities I represent and throughout New York City.”

Afterschool vouchers are given to large families for supervised extracurricular activities on a sliding scale. Families under social service supervision are given higher priority, which is mandated by the federal government. But many Orthodox families have qualified for some of the other priorities.

For example, Priority 5 benefits families where both parents work at least 20 hours a week but are within poverty guidelines. Priority 7 is for those with significant needs, such as large families, where only one parent works. That last grouping has not been funded in recent years, although it receives any money left over after the other priorities are funded.

Using the average cost of $2,748 per voucher, City Hall estimates that de Blasio’s funding would support about 1,740 low-income vouchers.

The funding did not come easily, though. When the mayor announced a preliminary budget earlier this year, activists were concerned that there was no funding included for Priority 5, considered a lifeblood for many Orthodox families.

By making the program a lasting portion of the city’s priorities, de Blasio has effectively fulfilled his last major campaign promise made to the Orthodox community prior to his election in 2013.

He announced earlier this year that the city was dropping its defense of a rule regulating metzitzah b’peh. And last year, the mayor announced a major turnaround in the way the city funds tuition for children requiring special education in nonpublic school facilities.

The latter policy in particular — which came after the Senate, in a bill sponsored by Sen. Simcha Felder, passed a bill requiring the city to pay the tuition costs in a timely process — was an enormous relief for the estimated 1,000 parents who have benefited.

Mrs. Leah Steinberg, who heads Agudah’s special education division, Project LEARN, announced in a press release Friday that the process instituted by de Blasio has worked during its first year.

“The verdict was extremely positive,” Mrs. Steinberg said. “Most participants agreed that applying for reimbursement was much simpler, with a faster response time to applications and a shorter time to reimbursement. … In fact, most administrators had a hard time finding problems to report.”

One item left out of the budget is a bill sponsored by Greenfield and co-sponsored by 47 other lawmakers to make private schools such as yeshivos eligible for school safety agents upon request. De Blasio said that he feels the police department is equipped to handle threats to all schools without the additional security.

Additional items in the budget includes a sweeping proposal that devotes more money to fighting homelessness, bolstering struggling schools and creating affordable housing but does not include funding to hire 1,000 additional police officers.

The plan — bigger than the budgets of all but five U.S. states — reflects New York City’s relatively strong economy and would represent a 4.4 percent increase over the adopted budget for the current fiscal year while not slashing city services or laying off municipal workers.

It falls in line with de Blasio’s view of an active, liberal government, though the mayor also deemed it fiscally responsible, touting the creation of a $1 billion general reserve fund and the decision to stow $2.6 billion in a retiree health care fund to cover expenses in any future economic downturn.

He opted not to fulfill the City Council’s top budget request — to hire 1,000 police officers. The council made a similar request a year ago, and it was also rejected by de Blasio.

The mayor — mere months after facing an open revolt by police union leaders and some officers — said investments in reforms, training and technology would let the New York Police Department do “even more” with its current headcount.