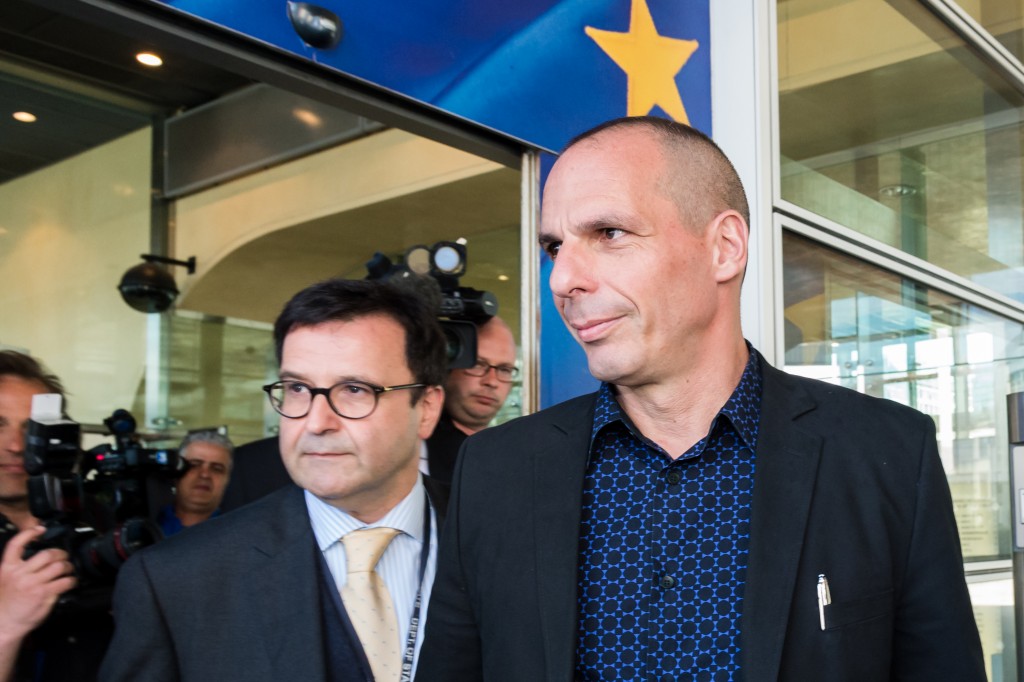 With Greek ministers dispatched across Europe on a whirlwind goodwill tour on Tuesday, top officials said they were making progress on finding a way to keep the country afloat and in the 19-nation eurozone.

A lasting deal to give Greece more cash, however, wasn’t expected by May 11, when the eurozone finance ministers will meet next. In the meantime, Greece will have to scrounge for cash to make a 750-million-euro repayment to the International Monetary Fund the following day.

“What I hope is that before May 11, in one week exactly, we will be able to have seen good progress in our discussion,” said Pierre Moscovici, the EU’s top financial official. “That is the signal that everyone is waiting for, both in Greece and by its partners.”

Greek Finance Minister Yanis Varoufakis said after talks Tuesday with Moscovici in Brussels that the eurozone meeting “will confirm the great progress that has been achieved.”

International creditors are pushing the Greek government to deliver economic reforms and budget measures before they unlock the remaining 7.2 billion euros ($7.7 billion) in its bailout fund. But the left-wing government wants to safeguard campaign promises that were vital in its January election victory, all on relaxing the austerity measures imposed on Greece to stave off its financial decline.

A Greek default on its debts could bring financial turmoil that could see it abandoning the euro. Economists say that could further devastate the economy and might have unpredictable effects on long-term confidence in the solidity of the shared currency.

Despite the positive comments Tuesday, the progress is unlikely to be enough for European creditors to immediately pay Greece the money it needs as its coffers run dry. Germany, Greece’s biggest European creditor, confirmed that talks were more constructive than in the past but said the timing of a full deal was still uncertain.

“I’m rather skeptical that we’ll manage it by Monday, but I don’t rule it out,” Finance Minister Wolfgang Schaeuble told reporters in Berlin.

One government official in Athens said there were “serious disagreements and contradictions between the IMF and the EU (which are) creating obstacles in the negotiations.”

The official, speaking on condition of anonymity because of government regulations, said the IMF was insisting on pension and labor reforms but was more relaxed on the issue of how large a primary surplus – the budget without debt-servicing payments – Greece must have. He said the basis of IMF thinking was to have a Greek-debt write-off in order to make the country’s massive debt viable.

The EU forecast on Tuesday put Greece’s debt in 2015 at 180.2 percent of gross domestic product – which many experts say is an unsustainable level of debt for Greece.

However, the Greek official said the European Commission’s red lines were on the issue of the primary surplus and not writing off any debt, while it was more relaxed on pension and labor reforms.

“The institutions have red lines everywhere,” the official said. “Under these circumstances, there can be no compromise. The responsibility lies exclusively with the institutions and the inability of them to agree among themselves.”

The official said the government had decided to put onto the negotiating table the plan for Greece to regain market access and the funding of growth after June.

As Varoufakis was shuttling from Athens to Paris and Brussels, Greek Deputy Prime Minister Yannis Dragasakis met in Frankfurt with European Central Bank President Mario Draghi, a key player in the Greek drama. The ECB said the two discussed the current state of the Greek economy as well as the ongoing negotiations.

The ECB has been keeping the Greek banking system going by permitting emergency funding through the Greek central bank. A funding cutoff could see Greek banks collapse. The ECB is regarded as unwilling to see that happen – so long as there is the hope of a deal between Greece and its creditors.

Varoufakis was to head later this week to Rome and Madrid to meet his counterparts there.

After a cantankerous meeting with his eurozone colleagues last month, Varoufakis wanted to make a point during bilateral talks Tuesday.

“It was particularly important to lay out the positive moves the Greek government has made since February so there can be an agreement,” he said after meeting his French counterpart, Michel Sapin.

It all reflects the uncertainty that has grown since the Syriza party won Greece’s general election. Businesses and investors are wary of making long-term plans in a country whose economic future seems clouded at best.

In its forecast, the European Commission said the “positive momentum” that was building last year, when Greece’s savage recession ended, has been stunted.