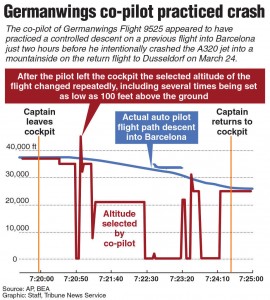 The co-pilot of Germanwings Flight 9525 appears to have practiced sending the jetliner into a deadly descent on another flight, just two hours before he intentionally crashed it into the French Alps, investigators said Wednesday.

The revelation appeared to support the theory that the Germanwings crash was not only deliberate but premeditated. It came in a 30-page interim report from the French accident investigation agency BEA.

Authorities are still puzzling over why Andreas Lubitz, who had suffered from depression in the past, locked the captain out of the cockpit on March 24 and sent the Airbus A320 hurtling into a mountain, killing all 150 people on board.

Lubitz seemed to be toying with the airplane’s settings on the earlier flight from Duesseldorf to Barcelona, programming it for a sharp descent multiple times in a 4 1/2-minute period while the pilot was out of the cockpit before resetting the controls, the report said. Unlike the later flight, he did not lock the pilot out of the cockpit.

The plane’s “selected altitude” changed repeatedly and several times was set as low as 100 feet (30 meters) above sea level. The report says Lubitz also put the engines on idle, which gives the plane the ability to quickly descend.

On the doomed flight from Barcelona to Duesseldorf, Lubitz also set a 100-foot altitude before the plane crashed into the Alps.

Aviation experts say it would be highly unusual for a pilot to repeatedly set a plane for such a low altitude for no apparent reason. The report said Lubitz did so while air traffic controllers were asking him to bring the airplane down gradually from 35,000 feet to 21,000 feet for its descent to Barcelona.

A BEA chart showed the plane didn’t actually descend sharply while Lubitz was repeatedly adjusting the settings, so the passengers and crew might not have noticed any change.

“The captain didn’t realize at all, because the co-pilot’s tests during the outgoing flight took place during a normal, preprogrammed descent and it never had an impact on the plane’s trajectory,” said Remi Jouty, the director of BEA.

“He was practicing to see how the airplane behaved,” said John Goglia, an aviation safety expert and former member of the U.S. National Transportation Safety Board.

This article appeared in print on page 2 of the May 7th, 2015 edition of Hamodia.