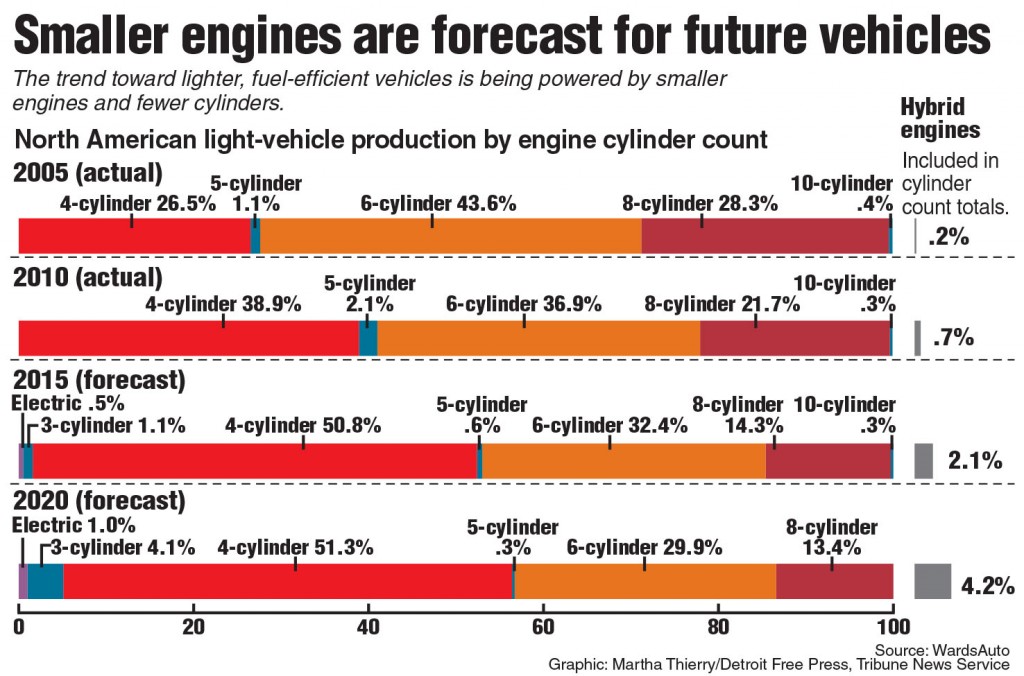 A high-end luxury sedan without a V8 engine; a Jeep Wrangler made of aluminum clambering over boulders; a Corvette that gets 30 miles per gallon.

The unthinkable is becoming reality with the transition to smaller engines, better transmissions, electronic wizardry and lightweight materials. Based on a slew of new models presented at auto shows this year, it’s clear the industry is changing forever to help automakers meet more stringent fuel-economy regulations in the future.

“We are now past a tipping point. They are making geometric strides in terms of the capability of vehicles,” said Joe Phillippi, analyst with Auto Trends Consulting in Andover, N.J. “It’s a great time to be an engineer.”

Auto engineers, as versed in software code as any in Silicon Valley, are squeezing power and performance from smaller and smaller engines. Automakers are investing billions redoing factories to use the cutting-edge materials, and their workers are being trained in the latest processes. Aluminum suppliers are making big investments, expanding capacity to meet bigger contracts and hiring new workers.

Consumers come out winners because it all adds up to better gas mileage for cars that are just as fast and powerful off the mark.

It’s a true watershed moment for the industry because automakers aren’t relying on hybrids and electric vehicles to meet efficiency standards. On tap are eye-popping, performance, luxury and iconic vehicles with absurdly small but powerful engines that have consumers salivating.

Buyers either don’t know or don’t care what’s under the hood because the power is plenty.

The vehicles at the shows reflect an industry that came to a crossroad and chose the gutsy path.

Poster children include a full-size Cadillac CT6 with a 4-cylinder engine and a Lincoln Continental with a V6 when a V8 would have been the norm a decade ago. The Ford GT supercar promises more than 600 horsepower from a twin-turbocharged V6. The return of the Acura NSX is with a V6 and three electric motors for neck-snapping acceleration.

Consumer acceptance is key, given the billions of dollars automakers are spending on new engines, transmissions, materials and technology. Designers are working with aluminum and carbon fiber and changing proportions because they no longer need huge engine bays.

On the plant floor, more body shops may follow Ford, which is retooling truck plants to make the F-Series with aluminum bodies instead of steel. All automakers are looking at more use of aluminum and other lightweight materials. GM is pursuing a mixed-material strategy. Fiat Chrysler Automobiles has hinted at an aluminum Wrangler, which raised the specter of moving assembly from its longtime production base in Toledo, Ohio.

New materials require new processes and training employees to use adhesives and rivets to attach aluminum panels where they used to weld pieces of steel.

Automakers had no choice; under proposed regulations, U.S. fuel-efficiency standards will nearly double by 2025. While the targets could change under a midterm review, the industry has had to proceed as if corporate fleets must average 54.5 miles per gallon a decade from now. It can take five years to develop a new vehicle — longer to introduce new engines, materials and technologies that can be spread across the lineup.

The trend to smaller engines is picking up.

In 2005, 44 percent of vehicles built in North America had 6-cylinder engines and 28 percent had big V8s — almost two percentage points more than the number of 4-cylinders, according to data from WardsAuto.

Fast forward to today. The year is expected to end with 51 percent of vehicles built with 4-cylinder engines, 32 percent with 6-cylinders and only 14 percent with V8s, according to Haig Stoddard, analyst with WardsAuto. Low gas prices have caused a huge increase in big pickup and SUV sales, but today’s large vehicles such as the Ford Expedition and Lincoln Navigator have a V6 under the hood.

The data blows apart the age-old adage that there is no replacement for displacement. Even when automakers offer the choice of a larger engine, consumers often pick the smaller and more-fuel-efficient option. In the midsize car segment, models such as the Hyundai Sonata and Ford Fusion used the trend to justify dropping a V6 altogether in favor of four cylinders. Others could follow suit: Nissan has few takers for the V6 in its Altima.

As long as the horsepower and torque are there, consumers are not balking.

And there seems to be no limit to the power coming out of ever-smaller engines, said Dave Sullivan, analyst with AutoPacific. “A V8 is not a requirement to succeed any more in any segment.”

Ford raised eyebrows when it reintroduced a pair of V6s in the popular F-150 full-size pickup for the 2011 model year. Today, 54 percent of its trucks are sold with a V6. That figure is expected to go up with the new-generation pickup.

The Cadillac CT6 has an aluminum-intensive chassis and body (64 percent aluminum) combined with 10 variations of high-strength, lighter-weight steel. The chassis weighs nearly 200 pounds less than if it were a steel structure.

And unlike Ford, which uses special rivets and glues to connect aluminum and steel parts on its F-150 trucks, GM developed a welding technique for the CT6 that saves weight and increases efficiency, said Mark Reuss, GM’s head of global product development.

“Ours is not an aluminum-only structure. I’m not sure other companies would have done aluminum, high-strength steel and aluminum castings in the way we have,” he said.

Ford’s Lincoln Continental also will have a V6 when it goes on sale next year. It will be from the same family as the 600-horsepower V6 in the Ford GT that goes on sale later this year and the V6 for the next-generation F-150 Raptor off-road performance pickup.

“It used to be that fuel-efficient vehicles were tiny and slow and unsafe,” said Phillippi, the analyst from Auto Trends Consulting. “The whole thing has been reversed. They can be big, powerful, safe and still be fuel-efficient.”