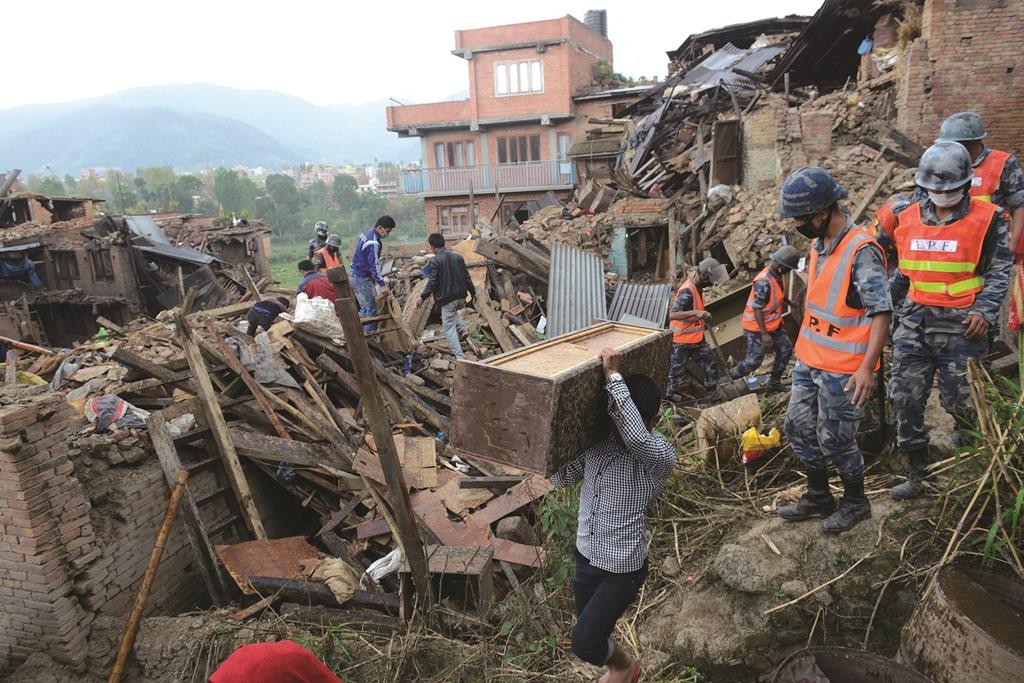 As the death toll from Nepal’s devastating earthquake climbed past 4,000, aid workers and officials in remote, shattered villages near the epicenter pleaded Monday for food, shelter and medicine.

Help poured in after Saturday’s magnitude-7.8 quake, with countries large and small sending medical and rescue teams, aircraft and basic supplies. The small airport in the capital of Kathmandu was congested and chaotic, with some flights forced to turn back early in the day.

Buildings in parts of the city were reduced to rubble, and there were shortages of food, fuel, electricity and shelter. Conditions were far worse in the countryside, with rescue workers still struggling to reach mountain villages two days after the earthquake.

Nepal’s Home Ministry said the country’s death toll had risen to 4,010. Another 61 were killed in neighboring India, and China’s official Xinhua News Agency reported 25 dead in Tibet. At least 18 of the dead were killed at Mount Everest as the quake unleashed an avalanche that buried part of the base camp packed with foreign climbers preparing to make their summit attempts.

At least 7,180 people were injured in the quake, police said. Tens of thousands are estimated to be left homeless.

Rescue workers and medical teams from at least a dozen countries were helping police and army troops in Kathmandu and surrounding areas, said Maj. Gen. Binod Basnyat, a Nepal army spokesman. Contributions came from large countries like India and China — but also from Nepal’s tiny Himalayan neighbor of Bhutan, which dispatched a medical team. Israel sent a team of 250 early on Sunday.

Two teams of U.S. Army Green Beret soldiers happened to be in Nepal when the quake struck, and the 26 Americans — who were training with the Nepalese army — are staying to help. The 11-member crew of a C-130 cargo plane that brought them also will remain to evacuate any American citizens if needed, said Col. Steve Warren, a Pentagon spokesman. A second U.S. cargo plane carrying members of a Los Angeles urban search-and-rescue team was due to arrive Tuesday, he said.

Medical and rescue teams from Russia, Japan, France, Switzerland and Singapore were expected in Kathmandu over the coming days, the Nepal army said.

In Kathmandu, some pharmacies and shops opened Monday, and bakeries began offering fresh bread. Huge lines of people desperate for fuel appeared outside gasoline pumps. At one station, dozens sat waiting on motorcycles.

Power seemed to have been largely restored Monday night, with streetlights blazing on major roads and lights illuminating closed shops. Things looked normal — except for the many tents pitched everywhere, including on traffic circles.

Fearful of strong aftershocks, tens of thousands of families were spending a third night outdoors in parks, open squares and a golf course, bundled against the chilly Himalayan night.

Pierre-Anne Dube, a 31-year-old from Canada, slept on the sidewalk outside a hotel. She said she had gone from the best experience of her life — a trek to Everest base camp — to the worst.

“We can’t reach the embassy. We want to leave. We are scared. There is no food. We haven’t eaten a meal since the earthquake and we don’t have any news about what’s going on,” she said.